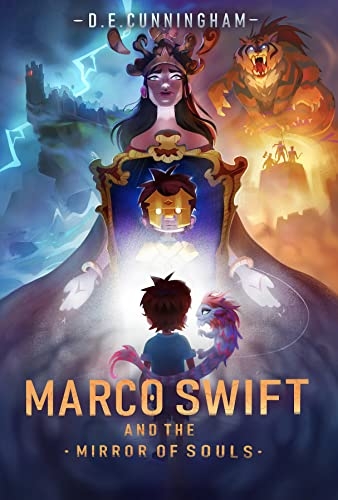 Struggling with the sudden death of his father and his mother’s downward spiral into mental illness, eleven-year-old Marco is haunted by dark forgotten memories and the fear that he’ll lose a second parent.

But when a mysterious enchantress appears with a promise to cure his mother, Marco soon finds himself dragged into a dangerous quest to retrieve a powerful weapon hidden at the heart of the magical World of Souls. Along the way, he’ll be forced to unravel his father’s secretive past – and reconcile with the long-buried darkness lurking within his own psyche.

Racing against time to reconstruct the fabled sword of light and defeat the fiendish monsters that are plotting his downfall, Marco will need to use all of his wits to figure out how he can save the World of Souls and find a way to cure his mother.

Will Marco be able to overcome the challenges of this mystical land and bring peace to the World of Souls? Or will he fail and be left alone with nothing but sorrow and guilt?

There is more bravery in us than we imagine.
What worked:
The author manages to create subtle doubt as the plot develops. Readers use clues to determine which characters are good and which ones are bad, and this book doesn’t make things obvious. Marco’s mom needs medical help, and he’s feeling tremendous guilt for her condition and his father’s death. He jumps at the chance to heal her when he passes through a mirror to meet the Illustra, Queen of Souls, and she asks him to retrieve a powerful sword called Straya. Dark is traditionally evil in novels, and Illustra is surrounded by shadows and ill-tempered creatures. However, she says Marco’s father helped defend the realm of Mortem before his death, and she has the golden armor he left for his son. Is this queen good or evil?
The plot has familiar elements that make it easy to follow. Marco’s sole focus is on protecting his mother and little sister, so it’s easy to manipulate his feelings. He discovers new abilities with the crystals, but his overconfidence puts him in situations he’s unprepared for. He’s given a quest to retrieve three pieces of a key that will lead him to his father’s hidden sword. The queen says Straya’s power will enable her to restore glory to Mortem and save Marco’s mother. Clues hint that there’s more to Marco’s character than it appears, and other characters allude to underlying events that will be revealed later.
While there are familiar elements to the plot, the cast of characters keeps the story uncertain. The queen tells three other kids to train Marco in using his crystals, but one of them openly detests him. The other two are helpful, but their motivations and alliances aren’t clear. A tiny dragon called Elune, with the appearance of a small cat, helps Marco along the way, but it enjoys teasing him about being a weak human and doesn’t always jump in to help. El says it has trouble remembering previous people and events, so there are questions about what it’s done in the past. The characters create an atmosphere of suspicion and distrust, as they express little empathy for Marco. The truth about everyone’s identity will eventually be uncovered.
What didn’t work as well:
Marco’s power in the mirror world comes from different-colored crystals on his armor. Twisting each of four colors presents a different ability such as strength, speed, or wielding a sword. The combat scenes feel like video games, as Marco quickly adjusts the different crystals to overcome the dangers. The crystals lose power fairly quickly, so there’s always a question of when they’ll run out and leave him in peril. While manipulating crystals in a fast-paced battle is strange, it results in more tension as the outcomes of the conflicts are less predictable.
The final verdict:
There is more bravery in us than we imagine. The author creates a puzzling world of uncertainty that pits good versus evil. Hidden identities cast light on the problems, and also the solutions. The book is recommended for lovers of fantasy worlds, mystery, and family. Give it a shot!

You are here: Middle Grade Review: Marco Swift and the Mirror of Souls: A Middle-Grade Fantasy Adventure (D. E. Cunningham)