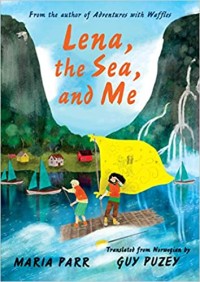 In a charming sequel to Adventures with Waffles,Trille and Lena navigate the rough waters of friendship when a new soccer coach and a new girl in school disrupt their seaside escapades.

Trille and Lena may be getting older, but they still find everyday adventure—and trouble—in their coastal village, including sinking every raft they build, getting little sisters stuck up flag poles, and attending those dreaded music lessons. But that’s not all. The arrival of a less-than-encouraging new soccer coach is putting twelve-year-old Lena’s goalkeeping career in doubt. And Trille is wondering how to impress the girl who has just joined his class. As the best friends battle the elements and their own emotions, one thing is for sure: they’re not giving up, not if Lena has anything to do with it! In Maria Parr’s follow-up to Adventures with Waffles,the acclaimed author returns to Mathildewick Cove with a rib-tickling story of growing up.

Trille and his best friend Lena are back after their Adventures with Waffles. Lena has just come back from vacation on Crete, and the two are making plans for the rest of their summer. Of course, there is a lot of sailing, sometimes with Trille’s grandfather, who is a fisherman. There’s also dreaded piano lessons, which neither of them enjoy, but which Trille is trying to pay attention to because he thinks his piano skills might impress fellow student Birgit, who is from the Netherlands. Trille and Lena also played soccer together in the past, but a new coach has made the experience less fun for Trille, and he drops out. He spends a lot of time hanging out with Birgit, hiking the hills around their coastal town of Mathildewick Cove. Trille’s mother has been cranky and gaining weight, and Lena (who is very forthright in everything she does) informs him that his mother is going through menopause. Concerned, Trille talks to his mother and encourages her to go to the doctor. When she does, she finds out that she is pregnant with her fifth child! Trille wants to make his mother happy, but also wants to stay friends with Lena, who is always involved in some questionable stunt like stringing Trille’s younger sister Krolla up in a tree (ala Lindgren’s Emil and the Great Escape) or going Christmas caroling in the middle of a storm. Luckily, the community is supportive, and helps out when Lena gets her friends in a jam.
Good Points
This was an interesting look at daily life in a Norwegian fishing community, and the scenes and goings on are described in such a way that I could see Trille’s adventures in my mind’s eye… although they appeared as they would have should Maj Lindman (of the Swedish Flicka, Ricka, and Dicka books) have illustrated them. Trille’s family runs a farm, and while their life is hectic, it is also very stable. Lena, who is a force of nature akin to Pippi Longstocking, has a very young mother and a very new stepfather who is a doctor.

The really interesting part of this book was Trille and Lena’s evolving friendship. Friendships are so key to middle grade readers, and it’s interesting to see the two as they investigate their own separate identities. Lena isn’t a fan of music, but Trille feels more drawn to the piano. He also doesn’t feel the same way about soccer as avid player Lena does. They still have plenty in common, but they are apart enough that Trille starts to worry about their friendship. The way that Lena is the most central character, but is seen through Trille’s eyes, reminded me a bit of the way we see Spinelli’s Stargirl through the eyes of Leo.

I haven’t seen a lot of titles translated from Nordic languages, but I’m always interested in seeing how people live in different parts of the world. This is somewhat similar to Rose Lagercrantz’s My Happy Life (which is set in Sweden) series, and would definitely be a great book to hand to a reader who has met and adores Astrid Lindgren’s classic works.

You are here: Middle-Grade Review: Lena, the Sea, and Me by Maria Parr