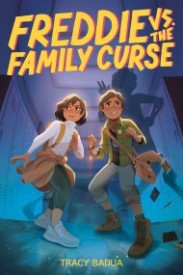 Freddie Ruiz is cursed.While other people may have bad days, Freddie and his family have had bad generations: from bird poop splatting on him during picture day to the many tumbles and trips that earned him the nickname Faceplant Freddie. He’s learned to lay low and keep himself out of trouble—which means no fun, no friends, and definitely no risks.
But when he discovers a family heirloom, a century-old amulet from the Philippines that’s supposed to bring good fortune, Freddie thinks his luck is finally about to change.
He couldn’t be more wrong. Because the spirit of Freddie’s cranky great-granduncle Ramon is trapped in the heirloom, and the evil spirits responsible for his death have returned with a vengeance. Now, Freddie and his cousin, Sharkey, have thirteen days to break the curse, or Freddie will join Ramon for an untimely afterlife in the amulet.

Freddie Ruiz has always had bad luck; it’s why he is called “Faceplant Freddie”. He keeps his head down, moves carefully, and limits his interests to RoboWarriors gaming cards. His great grandmother, Apong Rosing, tells him it is because of a family curse that occurred back during World War II, when she lived in the Philippines and her older brother, Ramon, became a soldier and was killed in battle. His cousin, Sharkey, lives next door, and since she is a Mendoza, she has perfectly fine luck, and is an excellent break dancer who works with the Wyld Beats dance crew at their school. When Freddie finds an amulet in the garage while looking for glue for a school project (he’s run out; that’s how his luck goes!), he is surprised when it comes to life and holds the spirit of his great uncle Ramon! He finds out that Ramon stole the amulet for luck from his best friend, Ingo Agustin, before going on the mission during which he was killed, and that the family has suffered under Agustin’s curse. Freddie has 13 days to find Ingo and have him remove the curse or the spirits will kill him! He and Sharkey try to research, but it’s hard to find a 97 year old former soldier who may or may not have survived the war! Luckily, they track him down in Nevada, which is a bit too far from their San Diego home to take an Uber when he refuses to talk to them. Sharkey is supposed to compete in a break dancing competition in Las Vegas, but when she sprains her ankle due to Freddie’s bad luck, the two decide that Freddie will take her place so they can travel there and stay in a hotel thanks to Wyld Beats sponsorship. The leader of the team, Dale, is very apprehensive, but Freddie works hard and doesn’t do too badly, and challenges Dale to a RoboWarriors match to seal his place on the team. Apong Rosing decides she wants to go to the competition as well, and they are soon on their way. Time is of the essence, since the evil spirits are closing in, and the children manage to make it by bus to the Oasis nursing home where Ingo lives. They must create a distraction when the staff won’t let them see Ingo, and this involves breakdancing which actually sets a few things on fire! Will they be able to find Ingo and discover the true nature of the curse, and get him to remove it?

Good Points
This was the perfect balance of a lot of things. It had some social issues, since Freddie has some anxiety about his constant embarrassment. There’s the cultural connection with a rich background of Filipino history and family traditions. There’s even a little WWII history with the Bataan Death March. The inclusion of breakdancing was absolutely perfect, since break dancing is going to be included as a sport in the 2024 Olympics. Combine all of these things with funny scenes, a road trip, and a thread of self acceptance and personal growth, and this is an absolute winner. The short length helps, and the cover looks fun. There are a huge number of students to whom I can hand this. Definitely worthy of a Kirkus starred review.

This was such a huge relief to read after ingesting a large number of lyrical, socially relevant, timely stories. It’s possible to address these needs and include cultural content while still having a book that is a bit more light hearted and positive. After all, the information about the Filipino involvement in World War II is pretty dire, but it’s handled in such an interesting and (dare I say it?) sweet way that what I took away from this was Ingo’s spirit of forgiveness and the Ruiz’s determination to move on after tragedy. Definitely my favorite book this month.

You are here: Middle-Grade Review: Freddie vs. The Family Curse by Tracy Badua