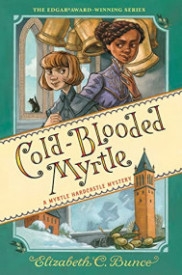 Myrtle Hardcastle—twelve-year-old Young Lady of Quality and Victorian amateur detective—is back on the case, solving a string of bizarre murders in her hometown of Swinburne.

When the proprietor of Leighton’s Mercantile is found dead on the morning his annual Christmas shop display is to be unveiled, it’s clear a killer had revenge in mind. But who would want to kill the local dry-goods merchant? Perhaps someone who remembers the mysterious scandal that destroyed his career as a professor and archaeologist. When the killer strikes again, each time manipulating the figures in the display to foretell the crime, Myrtle finds herself racing to uncover the long-buried facts of a cold case—and the motivations of a modern murderer.

Cold Case at Christmas
Myrtle’s small English village is like many who seem to suffer from far too many murders, especially for the late 1890s! The latest unfortunate demise is that of local shop keeper and former professor Mr. Leighton, who is found deceased right before the unveiling of his shop window’s Christmas display. While it seems that the poor man might well have had a stroke, Myrtle makes sure that the local constabulary doesn’t entirely discount murder, and she’s right. The tableau in the window has some alarming references, and there is something suspicious about the death. It seems to be involved in the long ago disappearance of a student named Olive Blackwell, who was a friend of Myrtle’s mother, who died of cancer when Myrtle was younger. Along with her tutor, Miss Judson, Myrtle starts to investigate the incident at the university in which her mother and several others were involved. A secret society initiation went wrong, and Olive was assumed to have fallen from a bell tower, but her body was never found. Myrtle talks to Leah, the new carillonist who is planning a concert for the first time since the event, people at the museum who have a display of an artifact that Professor Leighton had donated to them, and even some newspaper reporters who seem overly interested in the story. English villages have many secrets, and this is the first time that Myrtle has a personal connection to one. Will she be able to figure out Olive’s whereabouts, and learn more about her own mother’s past?
Good Points
Like Stevens’ Wells and Wong mysteries, Bunce deftly channels the energy of British detective stories from the early part of the 1900s, although while Stevens’ seems more aligned with Agatha Christie’s style, Bunce works in feminist issues more frequently found in Dorothy Sayers’ Harriet Vane novels. Myrtle is ahead of her time, and aided by Miss Judson, as well as Dr. Munjal and several other sympathetic adults, is able to forge ahead in ways that many girls during her time period would not have. Her father, a lawyer, plays a somewhat larger role in this book, and it’s good to see him more involved in his daughter’s life.

Young readers frequently want murder mysteries, and not only are several townspeople dispatched in this story, there is the historical mystery of Olive as well. This causes many people in the town to be suspects, and Myrtle doesn’t spare anyone! Since British murder mysteries are popular with adults not only in novels, but also in television shows, this series is a great way to introduce younger readers to this genre. There are plenty of clues to file away and figure out, and the twists and turns end in a very satisfying way!

Readers who enjoyed mysteries like Souders’ Coop Knows the Scoop, Gray’s The Amelia Six, and the work of Stuart Gibbs will find Myrtle a great introduction to the Victorian era and a keen detective when it comes to figuring out murders!