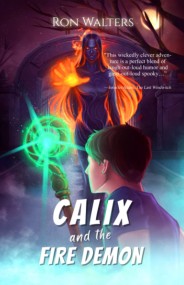 If there’s one thing 12-year-old Calix O’Shaughnessy is good at, it’s bad luck.
Divorced parents? Check. Eyebrows singed off after an unfortunate grilling incident? Check. Accidentally releasing an ancient Irish fire demon from the statue where it was imprisoned by St. Patrick 1,500 years ago? Check and check.
Now the demon’s on the loose, tearing through Savannah, GA, and it’s up to Calix to take it down whether he wants to or not. Because it turns out, not only are fairies, monsters, and demigods real, but Calix is one of the heirs of St. Patrick, tasked with ridding the world of supernatural threats.
Left with no other choice, Calix, his cousin, and his best friend follow a series of cryptic clues around Savannah in order to retrieve the pieces of an ancient Irish weapon known as the Demon’s Bane, the only thing capable of defeating the demon. If they fail, the creature will raise an army of malevolent spirits and bathe the world in unholy fire.
All of a sudden, regular old bad luck doesn’t seem so bad after all.

Celtic Monsters on the Loose

What worked:
The author eases readers into the conflict by sharing strange clues that something strange is happening. Calix’s dad is obsessed with searching for fairies, his dad forbids his sister from speaking to Calix, and a mysterious statue is raised from deep waters. Calix notices some eerie occurrences, such as actually finding the end of a rainbow, but he’s reluctant to accept his dad might be on to something. The story is set in Savannah, Georgia, where there’s apparently a large concentration of people with Irish heritage, and St. Patrick’s Day is fast approaching. Savannah isn’t a typical setting for a story but it’s long history, steamy climate, and ghostly reputation are ideal for this book.
The book has many of the familiar qualities found in other successful middle-grade novels. There’s the return of a powerful demon named Caorthannach seeking revenge as she amasses an army of minions. Calix is a “normal” boy who discovers the strange birthmark on his arm identifies him as an heir of St. Patrick, the man who previously imprisoned the demon. Calix’s best friend is a mortal named Nate who adds levity to the plot. Calix’s cousin Saoirse has been training as a warrior for years so she is the expert fighter all heroic trios need. The three friends are tasked with finding three hidden fragments of Demon’s Bane to add to Calix’s staff that will enable them to stop the demon. However, Caorthannach wants the same pieces to reach her full strength and potential.
Calix and friends must follow cryptic riddles to locate pieces of the Demon’s Bane and this quest becomes the focus of the plot. The clues instruct them to find a place where unconscious men traveled to lands unknown, traverse wormy oaks, and they will finally need to travel with Death. Questionable deals are struck at each stop and uncomfortable, frightening decisions must be made. The trio will give valuable parts of themselves to ancient creatures and the Devil makes an appearance to add a twist. Everyone knows it’s never a good idea to make a deal with the Devil.
What didn’t work as well:
The familiar formula of middle-grade hero novels makes this plot easy to follow but it also makes it less innovative. Readers know what to expect even though the Celtic characters are different. However, the story successfully comes together in an entertaining and exciting adventure.
The Final Verdict:
The author creates another fun adventure starring an unsuspecting middle-grade hero and friends. The Irish focus is uncommon in these types of books, but the overall book is very entertaining and leads into a sequel. I recommend you give this fun book a shot.

You are here: Middle-Grade Review: Calix and the Fire Demon by Ron Walters