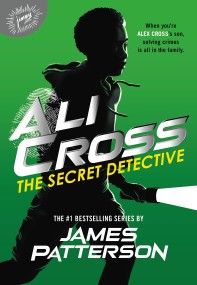 Ali Cross has always looked up to his father, the famous detective Alex Cross. And after helping to solve two big cases, Ali knows he has what it takes to follow in his father’s footsteps. Eager to keep solving crimes, Ali and his friends hack into police calls and go to crime scenes to watch the detectives at work—and try to crack the cases themselves.

But when Ali witnesses something horrible, he has to grapple with tough questions about what it means to be a detective and a detective’s son. Will Ali find a way to follow in his father’s footsteps . . . or will he be the one in danger’s path?

The debate surrounding police and society

What worked:
The main topic of the book is a current event that’s also an important social issue. The role of the police in society is debated, both figuratively and literally. The catalyst this time involves the shooting of a gang member by a policeman trying to stop a shootout between opposing gangs. The boy isn’t seriously hurt but it ignites deep feelings by people with conflicting thoughts. One side thinks the police are murderers and that their excessive use of force is a threat to citizens. The other view thinks the police are honest and caring and they’re trying to do their best in difficult situations. The author effectively shares ideas from both sides in an intriguing tale about a real-life problem.
As the son of a police detective, Ali finds himself thrown into the middle of the conflict at school and in public. Many classmates taunt him with jeers and bumps and a fake Instagram account with his name in the handle doesn’t help matters. Many people think Ali will always side with the police but he actually has a mind of his own. All the policemen he knows are good men and women but he understands how it looks when officers are forced to fire their weapons. Some people become obsessed with isolated instances and they ignore dangerous situations where officers step up to protect citizens. Even with the support of his closest friends, Ali feels alone when nasty comments and threats are targeted at him.
Nana Mama, Ali’s great-grandmother, is an admirable character living with Ali, his sister, his dad, and his stepmother. She steps up to calm a crowd of people who’ve collected outside the house to protest the police. She projects her voice with authority and manages to allay some of the tension. Ali has a habit of sneaking out of the house in the middle of the night and he feels like Nana Mama always knows what he’s doing. She never scolds him but offers thoughts to consider. She understands Ali’s behavior and worries and she does her best to lend support. She even lets him start dinner one evening even though it’s clear it will be a disaster.
What didn’t work as well:
This book differs from the previous two books and the title seems misleading. Ali isn’t actually solving any crimes as he’s caught up in tensions between the police and the public. The story itself is thought-provoking but it’s not what readers might expect when they start the book.
The Final Verdict:
The book doesn’t go into great detail regarding the issues surrounding the behavior of police but it presents the problem in terms young readers can understand and accept. This topic is the focus of the whole plot without any major twists or diversions. Overall, I recommend you give the book a shot.