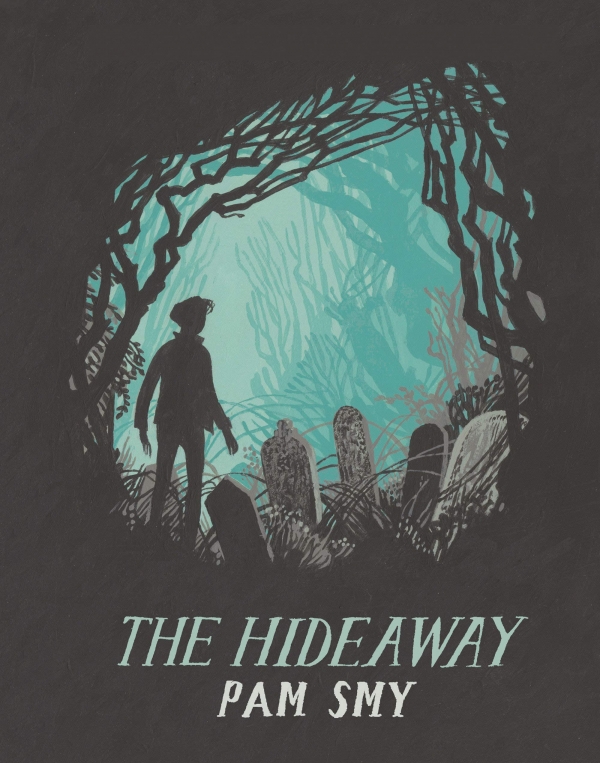 Told in two alternating narratives, The Hideaway tells the story of Billy McKenna, who runs away from home and takes refuge in an overgrown graveyard. The first narrative is told from his perspective, whereas the second thread tells of the situation at home and the police search for Billy. Covering themes of domestic violence, families, childhood, and being separated and reunited, this is an important and beautifully illustrated book for middle grade readers right up to adults.

The Hideaway is illustrated throughout with tonal and textured black and white drawings. The atmospheric illustrations seep into the edge of the pages before they give way to a series of double-page spreads as the story reaches its climax.

Family problems, here and beyond the grave
Billy has had enough. Five years of living with his mother’s boyfriend Jeff and watching him beat her up is enough. He packs his bag, and runs off to the cemetery on All Soul’s Lane on Halloween. Having been there on a school trip, he plans to stay and sleep in a small mausoleum that he calls the Pillbox for a couple of days. He doesn’t have much of a plan; he just needs to get out. Also told from his mother Grace’s point of view, we see her anguish at his disappearance, her fear of how Jeff will react, and her growing relationships with her once distant neighbors, who now rally around to support her and help find her son. Billy is a “good kid” who is never in trouble, keeps his room super neat, and does well in school. When Officer Choury investigates, she feels that there is information about the family dynamic that is going unsaid, and both she and a neighbor try to help her recognize her situation as domestic abuse and offer her alternatives. Billy meets an older man who is cleaning out the cemetery, and who helps him with food and a blanket. He promises not to tell about Billy for just a few days. Billy also meets a girl, Izzie, whom he knows from school. She also promises not to tell. As the days pass, Billy learns more information about the old man’s family, and helps clean up the cemetery for a “big event”. Officer Choury finds Billy’s journal, which describes years of domestic abuse. Will this be enough to motivate the mother to press charges and make a new life for herself and Billy once he is found?
Good Points
Accompanied by plentiful, atmospheric black and white illustrations, the graveyard setting offers an interesting foil to Billy’s bleak existence. The reactions to the changing situations seem particularly raw and real; Billy has to get away, his mother his fearful for his whereabouts but even more fearful for herself, and Jeff’s irritation is barely hidden. There is an interesting connection between Billy and the old man (who is not given a name) that comes out later in the book.

Domestic abuse is a problem in many parts of the world, and the research into this that Smy did is evident. I liked that the police and neighbors were paying attention and not discounting Grace’s experiences, or telling her just to sit tight. It wouldn’t be a bad idea to have included a list of resources in the back for children who might need help in similar circumstances.

This is a fantasy book; at one point, the cemetery and its ghostly inhabitants become a large part of the story, but I don’t want to ruin how this happens!

I have frequently voiced my concern about British parenting; there are any number of UK imports with parents who struggle to take care of their children for a variety of reasons, from Cathy Cassidy’s Dizzy (2004) and Indigo Blue (2006), to Crossan’s Apple and Rain (2016) and Lewis’ Scarlet Ibis (2018). This read a bit like Jacqueline Wilson meets Neil Gaiman. The Hideaway has a distinctly British feel and will be popular with readers who liked Thompson’s The Light Jar, DeStefano’s The Girl with the Ghost Machine, or Edge’s The Many Worlds of Albie Bright.

You are here: Middle Grade Review: The Hideaway (Pam Smy)