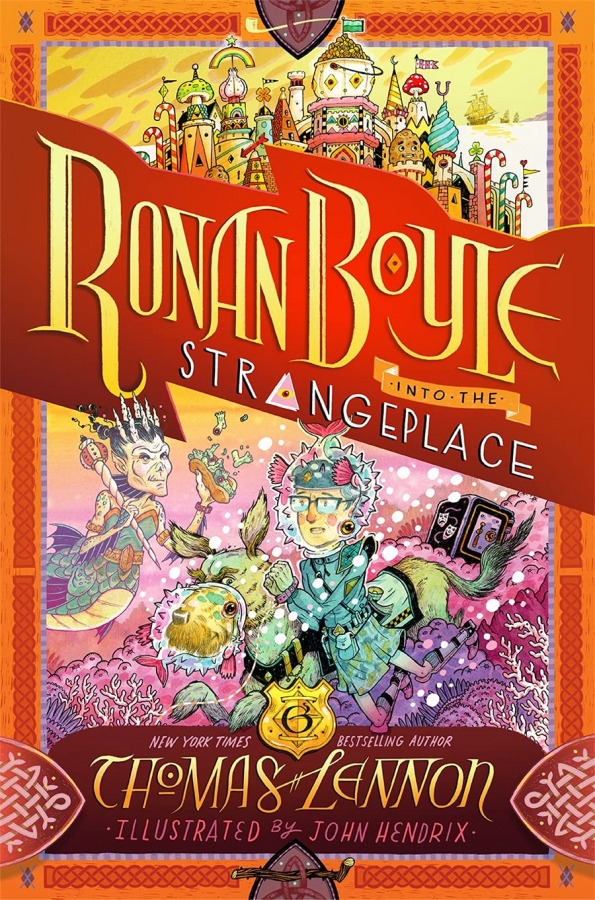 Ronan Boyle may be the youngest detective of the secret Garda, but now that he’s saved the captain from a spooky cult, he’s also the only detective that has the head of an old Irish god in his vastsack! But his adventures are far from over. His parents are still on the run (he told them the prison break was a bad idea!), and he still has to turn over the corrupt wee folk to the leprechaun king and return to the Human Republic of Ireland to turn over the god’s head. Simple, right? VERY WRONG! Between having to get swallowed by a whale to take a shortcut, avoiding a jar of hot pickle farts, and figuring out how he can prove his parents’ innocence, Ronan’s really got his hands full. Will our small, nervous hero be able to somehow save the day once again? Fast-paced, action-packed, and sidesplittingly funny, the third book in the New York Times bestselling series delivers strange creatures, heart-pounding thrills, and plenty of laughs.

A Hilarious adventure into the faerie world.
What worked:
Ronan is a human detective, but he investigates crimes related to faerie creatures. The first third of the plot finds him transporting rogue leprechauns imprisoned in a magical purse to a leprechaun king who will administer their punishment. This trip takes place below ground where Ronan encounters many other strange characters and beasts. However, the real story begins after the prisoners are delivered, as Ronan and a ladyship of female colleagues set out to capture Ronan’s nemesis, Lord Desmond Dooley. Dooley has enlisted the help of a world-famous entertainer who is bankrolling their evil deeds, and he always seems to be one step ahead of Ronan.
Ronan has a crush (or is he in love?) with his superior officer, and these feelings have been growing throughout the series. In a previous book, Ronan impulsively told her he loved her, so now he struggles to figure out if they might actually become a couple. Other characters notice which adds to the humor of the book. The thoughts pop up in Ronan’s mind more than necessary, but their relationship gains some clarity later in the plot.
This book is meant to be humorous, and it succeeds using bizarre mental images and wordplay. Picture a piece of cheese being the mayor of a town, Ronan wearing a pink wig during the adventure, and a villain having magical dancing feet as his superpower. Imagine a delegation of characters including the ghost of a toad wearing kabuki makeup, a Scottish cat wearing a soccer jersey, and a buff mythological Hawaiian dwarf wearing a grass skirt and lei of flowers. Ronan suggests his group should be called a ladyship, not a fellowship since most of the participants are female. They are captured in a tricky replica of a castle, and their escape requires a very unusual strategy.
What didn’t work as well:
This book requires a tolerance for silliness and crude humor, but thankfully, many middle-grade readers love these same qualities. The biggest issue is overly-descriptive details that are used to emphasize the humor. While funny, these descriptions slow down the plot and create distractions from what’s actually happening. The playfulness of the narrative is often strange, so readers need to balance their experiences with absurdity and the “seriousness” of the plot. The over-description is less noticeable during the mission to find Dooley.
The Final Verdict:
A hilarious adventure into the faerie world. The book will definitely be fun for readers with patience for the absurd. The descriptions and humor can be distracting, but the underlying story of the hero hunting down a notorious villain is easy to follow.