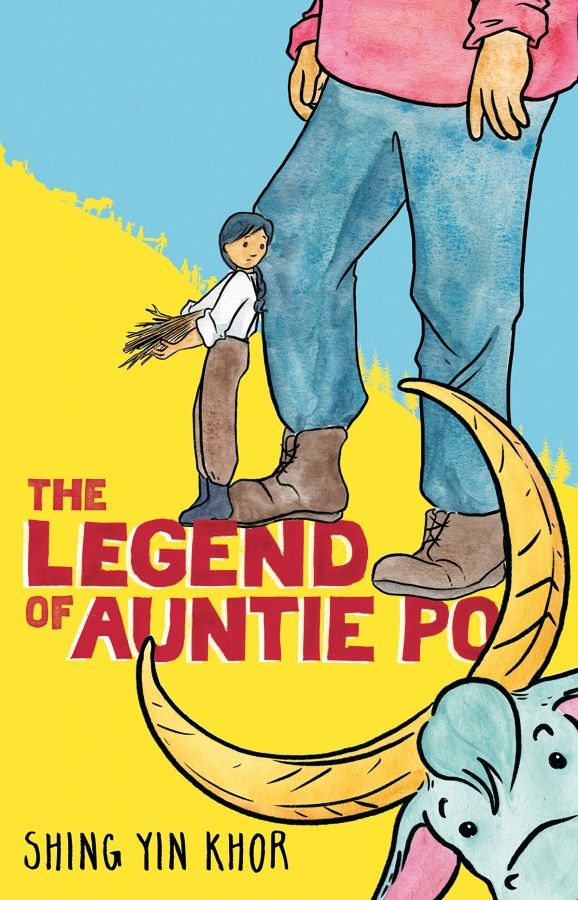 Part historical fiction, part fable, and 100 percent adventure. Thirteen-year-old Mei reimagines the myths of Paul Bunyan as starring a Chinese heroine while she works in a Sierra Nevada logging camp in 1885.

Aware of the racial tumult in the years after the passage of the Chinese Exclusion Act, Mei tries to remain blissfully focused on her job, her close friendship with the camp foreman’s daughter, and telling stories about Paul Bunyan–reinvented as Po Pan Yin (Auntie Po), an elderly Chinese matriarch.

Anchoring herself with stories of Auntie Po, Mei navigates the difficulty and politics of lumber camp work and her growing romantic feelings for her friend Bee. The Legend of Auntie Po is about who gets to own a myth, and about immigrant families and communities holding on to rituals and traditions while staking out their own place in the United States.

New Twist on Paul Bunyan
In 1885, Mei Hao lives with her father, who is a cook for a logging camp in California run by Mr. Andersen. Because Mei and her father are Chinese, there is a lot of prejudice against them, even though Mr. Andersen thinks of them as “family”. Sometimes, this is true. Mei is best friends with Bee, and the two often plan their futures together. Since Mei has a crush on Bee, she has conflicted feelings when Mei talks about getting married and prefers the scenario where the two move to the city and run a pie shop together. In other ways, the differences are clear. The Chinese loggers are fed separately from the white loggers, Mei is not paid, and the treatment of Chinese workers is not equal. There are also a few black workers, who hold a place somewhere in between. Mr. Andersen hires his brother to “help” in the kitchen, which Mr. Hao doesn’t particularly like, although he keeps silent, and when the people who own the camp complain, Mr. Hao and his Chinese assistant are both fired. The food is awful, and the white men in the camp eventually approach Mei to help feed them, and go to Mr. Andersen with their complaints. Mei is known for telling stories to keep the children happy, and has told many stories about Auntie Po, a Paul Bunyan-like character who also has an ox, and who takes care of the miners. As the tensions in camp worsen, Mei begins to think that she actually sees Auntie Po. This happens more often when tragedy occurs in Bee’s family, and the whole logging camp struggles to deal with this event. In the aftermath, Mr. Andersen starts to realize how badly he has treated the Chinese miners, and especially the Hao’s, and tries to make amends.
Good Points
This was a great historical story with a unique spin on the Paul Bunyan tales. Reimagining them with a Chinese Auntie makes perfect sense, since folklore is always adapted to fit different cultures. The information about logging camps is well researched and informative. Mei does not have a lot of hope for her future at the beginning of the story, but it is good to see that by the end, there are other options for her. The LGBTQIA+ representation is not a large part of the story, but it’s nice to see it represented in a historical context. Certainly, there were “Boston marriages” (a term in use around this time) even on the west coast! Mr. Andersen’s portrayal as someone who thought he was progressive for the time but who still didn’t treat his employees equally in interestingly done. The story moves along quickly.

This was such an intriguing piece of history that I wished it wasn’t a graphic novel, so I could have gotten more information! The illustration style is fresh and new, and the color paletter kept me engaged. The relationship between Mei and Bee will resonate with readers who enjoyed Ostertag’s Girl from the Sea.

This was a really interesting story; I just wanted more information! A great addition to a slowly growing collection of graphic novels with cultural connections like Wang’s Stargazing, Chanani’s Pashmina, Sells’ Cardboard Kingdom and Camper and Raúl the Third’s Lowriders in Space.