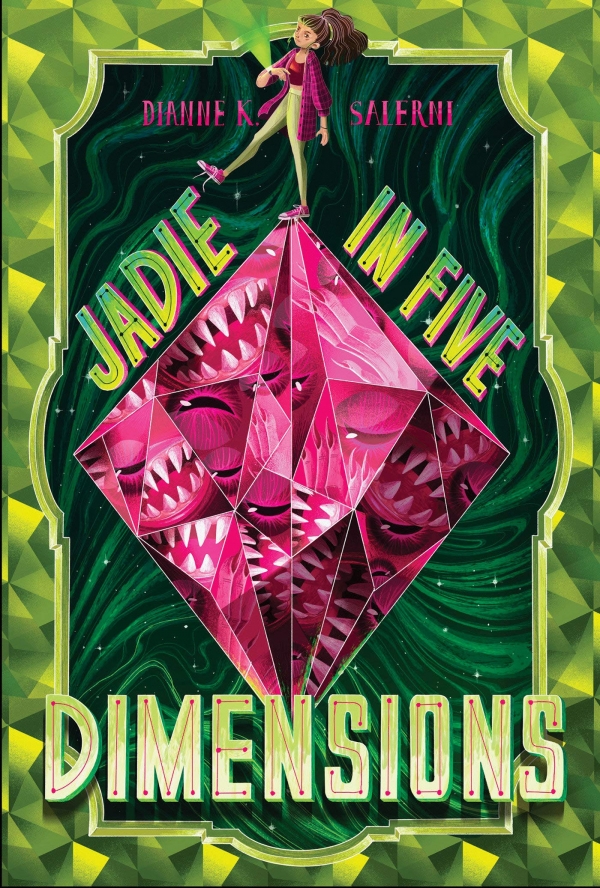 Jadie Martin was always told she was abandoned by her parents. Creatures from the 4th dimension rescued her and placed her with a loving adoptive family. Now, Jadie acts as an agent for the beings, also known as Seers. She uses the 4th dimension as a short-cut to travel anywhere on Earth, performing missions calculated to guide the world toward a brighter future.

But then Jadie discovers that her origin story is fake. In reality, her birth family has suffered multiple tragedies and disasters engineered from 4-space, including the devastating loss of their baby girl. Her!

Doubting the Seers, Jadie starts anonymously observing her long-lost family. Why are they so important? What are the true intentions of the Seers? And what will all-powerful four-dimensional beings do to a rebellious human girl when they realize she’s interfering with their plans?

A Wrinkle in Time meets Flatland in this thrilling journey that challenges the meaning of family, loyalty, and our universe at large.

Tesseracts and Interdimensional Travel
Jadie is part of a group of people who do the bidding of the mysterious Seers. She and her family, who are part of a small enclave of four families who live in a cul de sac, travel to different parts of the world and do seemingly meaningless tasks that they are assured change the course of the world for better. The parents in the group were all approached in college by Miss Rose, and when the children are old enough, they go on missions as well. Jadie was adopted after her parents abandoned her… or at least that’s what she has always been told. When her friend Alia asks Jadie to do a mission for her, Jadie finds herself in an apartment (where she is supposed to spill water on a computer) where there is a portrait of herself as a baby, along with another family. Intrigued, she enlists Ty’s help in traveling back to find out more. We also see the story from the point of view of Sam, Jadie’s brother in the other reality. His family has struggled ever since Jadie was taken in a carjacking. His mother has mental health issues, and his father has found it hard to get work. Sam does some computer programming for video games, and counts on the income that provides, so he is not happy when his computer is threatened several times. Eventually, Ty and Jadie’s brother Marius steal Sam’s computer, and his work, along with the information Jadie has uncovered, leads them all to doubt the intentions of the Seers and of Miss Rose. When Sam’s father is abducted by “resisters” to the Seers, will they be able to use their knowledge and travel through five dimensions to bring him back and save the world?
Good Points
Did you ever wonder what happened to Meg Murray’s father when he disappeared in A Wrinkle in Time? This is a likely scenario. While I personally had a lot of trouble following all of the multidimensional information about tesseracts and directions that don’t appear in our dimension, this didn’t lessen my enjoyment at all. It was interesting to see a frustrated scientist given the opportunity to solve questions he’s been working on, and being thwarted for, especially when the results had such far reaching consequences.

Of course, younger readers will be intrigued by the Face on the Milk Carton quality of Jadie’s experience. Did her first mother and father abandon her? Why didn’t they fight for her? What allegiance does she owe to Miss Rose for her loving family? Should she question the Seers more? Just what is reality? These questions are all compelling even with my limited working knowledge of the science involved, and Jadie’s experience will resonate with middle grade readers who love stories that involve issues of personal identity.

Die hard science fiction addicts will love the scientific explanations of the fourth and fifth dimension, complete with reasons why slide rules have to be used in some of them, and how gravity works in the various levels! There were also some great villains and creatures in the book, and a very interesting commentary on what is considered beautiful.

Readers who enjoyed this author’s The Eighth Day (which is another twist on worlds we can’t see) or Eleanor, Alice, and the Roosevelt Ghosts will find Jadie in Five Dimensions to be a physics laced romp with travel to rival Durst’s Odd and Even, Lerangis’ Throwback, Scarrows’ Time Riders, or Welford’s Time Traveling with a Hamster. If it encourages young readers to investigate L’Engle’s classic A Wrinkle in Time, all the better!