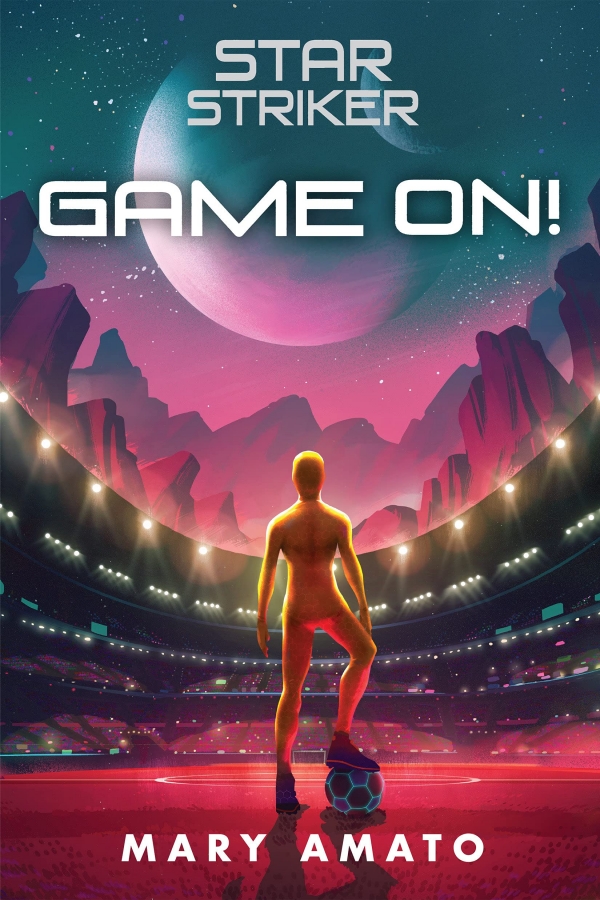 The day that aliens abducted 13-year-old Albert Kinney was the day he was hoping to make the school soccer team.But that’s the way life works sometimes, especially for Albert.

Astonishingly the Zeenods, don’t want to harm Albert, they want him to play soccer. And so, Albert jumps at the chance to join the Zeenods. Yet just as he is introduced to the specifics of their game and all their high-tech gear, he faces a series of direct threats to his life. Does someone have a mysterious vendetta against Albert? Or does their first opponent, the ruthless team from Planet Tev, want to guarantee that they win?

Action-packed, yet filled with humor and heart, Game On! is the first book in a series that features thrilling play-by-play soccer scenes and an intergalactic plot with far-reaching consequences for the Zeenods–and Earth.

An emotion-filled adventure of danger and secret plots.
What worked:
Albert is recruited to play in a popular johka, a sport similar to soccer, tournament on a far-off planet called Zeeno, but the more serious conflict involves the Tevs and Zeenods. The rest of the universe is unaware the Tevs have taken over the planet and have been suppressing the freedom of Zeenods for decades. It takes Albert quite awhile to fully appreciate the plight of his Zeenod teammates, but he finally understands how critical this tournament is to the original inhabitants of the planet. It may be the answer to years and years of oppression.
The story has a spiritual aspect to it, as Albert learns to overcome his fears and learns how to mesh with his teammates. The brain has great power. Albert feels fear, anger, and anxiety but lets his emotions take over his thoughts and actions. He fails to make the school soccer team and is jealous of his neighbor’s popularity as the school’s best player. This feeling becomes anger that is directed at his neighbor and at himself. He gradually understands he needs to accept his emotions are natural and okay, but his reactions to them need to become more positive. Fear and anger can be debilitating, but the energy from emotions can be used to help yourself and others.
Several different points of view are shared throughout, and in other books, this sometimes results in confusing and disjointed stories. However, the inclusion of a disgruntled scientist adds danger, mystery, and tension to the events. A botmaker named Mehk is determined to force Albert into quitting the tournament, so his robot can replace Albert on the team. It’s unclear why this is so important to the scientist, but Mehk attempts strategy after strategy to get it done. He’s actually a brilliant man even though he’s mentally unstable. The author adds a complication to Mehk’s plans when an unknown person also tries to stop Albert from competing, although this person’s plans involve killing the young boy. The dog living next door to Albert also shares a point of view with the story, though its impact in the whole book isn’t clear until later.
What didn’t work as well:
Early in the book, chapters from the neighbor dog’s point of view seem rather unusual and unimportant. Tackle barks and jumps a lot when Albert is around, so Albert becomes scared and the dog gets into trouble. Tackle is actually trying to warn Albert about a spybot squirrel hiding in the tree, but the boy doesn’t understand. Albert is usually at school or traveling to the planet Zeeno for johka practice. However, Tackle’s role in the overall plot becomes more crucial as the story moves along, and his chapters are some of the most entertaining. The relationship between Albert and Tackle evolves into something special.
The final verdict:
An emotion-filled adventure of danger and secret plots. This book will appeal to lovers of aliens, soccer, and friendship. While the johka tournament is the backdrop for the book, the real story is about Albert’s transformation to help the Zeenods overcome their oppression. The action, mystery, and danger make this book a recommended read for middle-grade students.