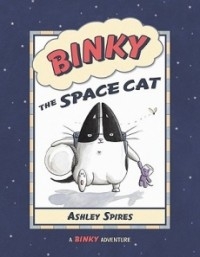 Binky is a space cat - at least in his own mind. He's really a house cat who has never left the family "space station." Unlike other house cats, Binky has a mission: to blast off into outer space (outside), explore unknown places (the backyard) and battle aliens (bugs). Binky must undergo rigorous training so he can repel the alien attacks that threaten his humans. As he builds his spaceship, he must be extremely careful with his blueprints - the enemy is always watching. Soon Binky is ready to voyage into outer space. His humans go out there every day and he's sure they need a certified space cat to protect them. But just as he's about to blast off with his co-pilot, Ted (stuffed mousie), Binky realizes that he's left something very important behind ? and it's not the zero-gravity kitty litter. In the first book in the Binky Adventure series, graphic-novel readers will delight in watching where this lovable and quirky cat's imagination takes him.
Tweet

Meet Binky
August 13, 2009
Overall rating
5.0
Plot/Characters/Writing Style
5.0
Illustrations/Photos (if applicable)
0.0
I
loved, loved, loved this one. It's about a cat, Binky, who has just
received his certification. He has become an official "space cat." I'd
tell you more about what that means. But it is super-top-secret
information. And I don't want to be scratched and hissed at. Curious?
Read the book yourself!

While I can't tell you about the
top-secret-purpose of space cats, I can tell you more about Binky. He
lives with two humans--one big, one small. And he has an important job,
one that involves protecting his humans.

Actually Binky hasn't ever been outside.
He lives here, in this space station,
Entirely surrounded by outer space.
That's why, until now, he has had to stay inside.
Outer space isn't safe for an ordinary cat.

But
just because he's never been to outer space, doesn't mean Binky doesn't
battle aliens on a regular basis. Some aliens are bold enough to come
inside the space station. And when they do, (crunch, crunch) Binky
takes care of it. Who are these aliens? Why aren't the humans aware
that they're being invaded? Binky doesn't know why humans haven't been
smart enough to figure out that bugs and aliens are the same thing. It
was easy for him after all. He learned it when he was just a kitten.

Despite his young age,
He quickly realized...
That aliens...
Were...
Everywhere!!
He could tell they were aliens
Because they could fly.
Even kittens know
That only aliens
Can fly.

I
found Binky The Space Cat to be funny and charming. I loved the
illustrations and the text. Binky is a character that I just loved.