Once Upon A Time: Wild Orchid: A Retelling of "The Battle of Mulan" 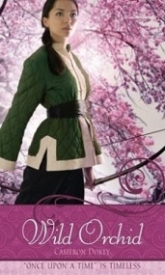 Wielding a sword as deftly as an embroidery needle, Mulan is unlike any other girl in China. When the emperor summons a great army, each family must send a male to fight. Tomboyish Mulan is determined to spare her aging father and bring her family honor, so she disguises herself and answers the call.

But Mulan never expects to find a friend, let alone a soul mate, in the commander of her division, Prince Jian. For all of Mulan's courage with a bow and arrow, is she brave enough to share her true identity and feelings with Prince Jian?
Tweet

This story is based on The Ballad of Mulan, a Chinese
poem. I was very intrigued the whole while, but sort of bored, as I
knew the story because of the Disney movie "Mulan". Though the Disney
movie is also a reshowing of the ballad, this book was just so related
to it as well. Well, the storyline is. It has to be, for it to be,
well, a retelling of Mulan... Anyways, I still found it interesting how
this story made Mulan more courageous to replace her father because of
his new love, and her father hadn't cared for her at first because of
the grief of the death of his first wife. The addition of Li Po, a
friend of Mulan's, was also interesting because he is an explanation of
how Mulan knows how to do the tomboy-ish things she does. It was also
interesting how there was more than one prince, but it was obvious from
when she met him that they'd eventually be together. There were some
mistakes in this book, much less the grammar than the actual story. It
was still heartwarming and lovely. <3

Wild Orchid is part of the YA Romance line of books 'Once Upon a Time' from Simon & Schuster. I've been with this series since the very beginning (The Storyteller's Daughter, Cameron Dokey 2002) and so far only two books have let me down in any great way. Wild Orchid
holds a special place for me because in 1998 I fell in love the Disney
Animation 'Mulan', and while realizing even then that Disney liked to
romanticize their movies a great deal, the story itself fascinated me.
To be certain I read the english translation of the originator (Ballad
of Mulan) and laughed myself silly over the changes.

I
went into the book with similar expectations as that of the Disney
counterpart. Its short, just over 199 pages and the first half is
almost exclusively about Mulan's childhood and how she was different
from other girls her own age. I got worried when the next quarter of
the book dealt with her father returning home and yet there was still
no mention of Mulan running off to war. Her actual time in the army was
short, couldn't have been over a month (in the ballad she was in the
army for 12 years!) and almost immediately she singles herself out for
notice. This portion of the book--that of her army exploits and meeting
Prince Jian--seemed very rushed and hurried.

We
meet Jian's two older brothers--Ying the oldest and Guang the second
oldest--but very little time is given to either one. We are told that
Ying is a subtle thinker and less warrior then scholar. We are told and
briefly shown that Guang is a manipulative person, very deep in court
intrigues and secrets. I would have liked to see the two more,
especially Ying since I didn't understand why his brothers respected
him enough to halt their bickering.

Then also the
romance between Jian and Mulan is quick and almost literally love at
first sight for Mulan (then in the guise of Hua Gong-shi). Later when
Jian admits he feels as if their hearts beat as one, still believing
Mulan is a male foot soldier under his command, I couldn't help but
wonder that he didn't seem at all worried by this. Is it so normal then
for a commander and foot soldier be so attuned with each other? Over an
archery match no less?

Still I enjoyed this
novel. It wasn't exactly what I wanted as a retelling of of the Ballad,
but it at least built up her background much better then I could have
hoped for. Incidentally reports vary about Hua Mulan--her origins, when
she fought etc. Some report that she was trained in warfare early on in
life, as was normal for daughters of ranking military officiers. The
book however makes it clear that its considered unladylike. Also some
reports say that Mulan told her father outright her plans. So I wonder
at what pieces Dokey took from which sources to make up the fabric of
the story.

Olivia Farr, Staff Reviewer
"DISPLACEMENT is a fascinating graphic novel that transports the main character and the reader to the 1940s internment/incarceration of Americans..."

Olivia Farr, Staff Reviewer
"FINDING BALANCE is a YA contemporary romance that follows Mari and Jase. Mari had osteogenic sarcoma when she was 10..."