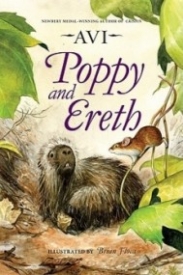 Poppy, a deer mouse, and Ereth, a grumbling porcupine, have been the best of friends for as long as the animals of Dimwood Forest can remember. An unstoppable pair ever since they defeated the tyrannical owl, Mr. Ocax, Poppy and Ereth have enjoyed many happy adventures together. But when a swirl of bitter winter storms buries Dimwood Forest in snow and Poppy's husband, Rye, dies suddenly, all Poppy wants is some privacy. "Dancing doorknobs," Ereth mutters to no one in particular, "how can she not want to see me?" As he waddles back to his log, Ereth fears he may have lost his dear friend forever.

But Ereth has not lost Poppy, at least not yet. As the ground begins to thaw, life returns to Dimwood Forest and Poppy ventures out in search of excitement. Suddenly, swooped up by Luci the bat, Poppy is flying high over the forest and unexpectedly embarks on her greatest adventure. Meanwhile, Ereth, left to his own devices, manages to convince himself that Poppy has died and, as only the old porcupine can do, sets about to give her the best memorial service the forest has ever known.

The last episode of the Poppy stories, poppy and ereth is a rousing adventure befitting one of the great heroines of children's literature as well as a final, heartwarming celebration of the life, love, and friendship of two most unlikely companions.
Tweet

Already have an account? Log in now or Create an account
Avi brought the beloved Poppy series to a great end
February 25, 2009
Overall rating
5.0
Plot/Characters/Writing Style
5.0
Illustrations/Photos (if applicable)
0.0
Reader reviewed by BookBegger


After Ryes untimely death Poppy seeks to see Ragweeds earring. She makes the dangerous trip over Glitter Creek When she hears Ereth crying for help she runs and helps the drowning Ereth out of Glitter Creek. Soon after Ereths rescue he believes he sees her ghost. Then breaks the terrible news of Poppys death by saving him to her family. Did Poppy really die?

I really dont read books about mice or porcupines, but this was an interesting and good book. Avi brought the beloved Poppy series to a great end.

There are creative settings and dangers ahead in Poppy and Ereth.

All the characters are very likeable. My favorite characters in this book is probably Spruce one of Poppys many grandchildren and Luci. Spruce is very adventurous like his Grandma . Luci is a young bat that mistakes Poppy for a moth (I think that was very creative of Avi.)

It was a fun, nice, cute book.

was a very easy to understand and enjoyable with a satisfying ending.

Michelle Lynn, Assistant Indie Manager
"This book is a winner the moment a reader lays eyes on that cover--and the title. My niece--who is picky..."
You've Got Dragpms
5.0