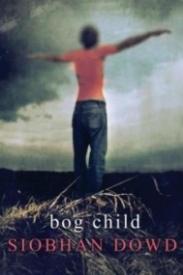 DIGGING FOR PEAT in the mountain with his Uncle Tally, Fergus finds the body of a child, and it looks like she’s been murdered. As Fergus tries to make sense of the mad world around him—his brother on hunger-strike in prison, his growing feelings for Cora, his parents arguing over the Troubles, and him in it up to the neck, blackmailed into acting as courier to God knows what—a little voice comes to him in his dreams, and the mystery of the bog child unfurls.

Bog Child is an astonishing novel exploring the sacrifices made in the name of peace, and the unflinching strength of the human spirit.
Tweet

If you don’t know anything about bog bodies, Dowd’s novel is a great place to start. In it, eighteen-year-old Fergus and his Uncle Tally find a female body buried in the bog while they’re out shoveling peat. In case you aren’t aware, peat is commonly used for fuel. Thinking that they have discovered a murder victim, they call the police. Turns out, they should’ve called an archeologist. The body has not been in the bog for weeks or months but for years. In case you also aren’t aware, bogs preserve bodies kind of like mummies in Egyptian tombs. All kinds of other information is learned when the archeologists arrive. For example, the woman is wearing a gold bangle, which she would have made a good sacrifice. Then again, there’s also a rope around her neck, suggesting she might have been hung as a criminal before being thrown into the bog. That’s the thing about bog bodies: scientists can identify their gender, age, and season of death, but normally not the reason they are in the bog. What makes Bog Child such an engaging and informative read is that Fergus starts having dreams about the buried woman, whom he names Mel, and the nature of her death. These dreams are intertwined with his muddled feelings about his brother, who is on a hunger strike.

You see, besides learning about bog bodies, I also received many chapters-worth of education about a period known as Ireland’s Troubles. While being aware of Ireland’s internal strife, Ireland’s occurred during my high school years and so escaped my notice. A Google search revealed that in 1981, Irish political prisoners went on a hunger strike during the time Margaret Thatcher was in power in Great Britain. Important to this movement was Bobby Sands, who died for the cause. In Bog Child, there are numerous references to soldiers, border checkpoints, bomb-makers, Semtrax, courier recruitment, hunger strikes, and violence. On a more personal level, Fergus (and his family) struggles to make sense of his brother’s decision to join other protesting prisoners in a hunger strike. At one point, Uncle Tally expresses the hope for all of them that, “One day the only border will be the sea and the only thing guarding it the dunes and the only people living in it Republicans.” Yet Bog Child isn’t a pro-war book. One of the most-touching friendships is between Fergus and an enemy soldier Owain, whom Fergus discovers is just another regular guy like him.

Intriguing as I found all of the above, the backdrop of Ireland meant that I also found Bog Child at times a little difficult to understand. Besides finding myself lacking in knowledge about Ireland’s political wars, I felt like a student in having to guess at the meaning of several words. For example, did you know that “gorse” is a spiny and prickly shrub that thrives in dry acidic soils? Or that “lough” is pronounced “lock” and means “lake”? Now while words like those didn’t significantly hinder my understanding of the story, other words such as “JCB” and “Provo” proved more important to know. As best as I could determine from a Google search, “JCB” refers to agricultural machinery while “Provo” refers to a member of the Irish Republican Army who used guerilla warfare in an effort to drive British forces from Northern Ireland.
Being set in Ireland, it might not come as a surprise to anyone that Fergus and his family are Catholic. However, I must caution that Fergus is a not a believer. He refers to church as a place that one must attend, no matter what their feelings about God. As to those feelings, he stopped believing in God about the same time he stopped believing in Santa Claus. His soldier friend Owain is Protestant instead, but has also fallen in the faith.

Yet none of the negatives should deter you from reading Bog Child. It is full of happiness and sadness, joys and tragedies, and is one of the most original stories about growing-up that I’ve read.

Allison Top 500 Reviewer 19 reviews
Report this review Comments (0) | Was this review helpful to you? 0 0
Loved It!
March 18, 2012
Overall rating
4.0
Plot/Characters/Writing Style
4.0
Illustrations/Photos (if applicable)
N/A
This is a moving tale. It put me in a state of calm when I read it. I loved the main protagonist. There was a certain innocence about him that I liked. It has some important themes and deals with issues many readers can relate to. It was a great read.

Al Stone Top 100 Reviewer 43 reviews
Report this review Comments (0) | Was this review helpful to you? 0 0
Powered by JReviews
How to resolve AdBlock issue?
X