Among the Enemy (Shadow Children #6) 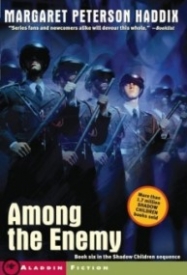 She has done it again with this wonderful book in the series and is the best in th whole series. All you have to do is start reading the first page and you are garennteed to love and never stop reading the book until you have read it a bunch of times at least that is what i thought of the book. So READ THIS BOOK AND YOU WILL love this book. man i can't believe how fast i read this and i can't believe if you didn't read this book then you need to like right now wait read the books in front of this book so it wouldn't ruin it for you.

a reader #1 Reviewer 20047 reviews
Report this review Comments (0) | Was this review helpful to you? 0 0
Behind Enemy Lines
November 09, 2008
Overall rating
5.0
Plot/Characters/Writing Style
5.0
Illustrations/Photos (if applicable)
0.0
Reader reviewed by Sam

Imagine a world where families are only allowed to have two children. Matthias, Percy, and Alia are all illgal third children. The population police wants them, and everyone like them, dead. The trio have already been in population police prison once, and have escaped. They escaped with another third child, or "Shadow Child", and go to a safe place. There, a friend, who is the headmaster at a bording school, send Matthias, Percy, and Alia to another bording school.

This is where it begins. Population Police officials take everyone at the school to work for the population police in a work camp. But, the truck with the trio on it wrecks, and they get away. When the vehicle wrecks, though, Alia is badly hurt, with a concussion, and later she developes a fever. Alia is the youngest, at 6, Percy is 9, and Matthias is 10. Matthias carries Alia, and the two boys look for a place for the night.

They find a cabin, but when Percy yells out that he sees it, gunfire erupts all around. Rebels in the cabin had ambushed the Population Police officials. There were exactly 17 rebels in the cabin. None of them survive. In the midst of the gunfire, Percy is hit in the leg. Matthias waits until the Population Police are gone, and goes down the hill to get to Percy. He carries/drags Percy and Alia down to the cabin. There, he searches the entire cabin, and accidentally finds a secret lach to an underground room. He takes Alia and Percy down there, and puts them on cots he finds, and gives them bread and water that he also finds. He takes a little for himself, lights a lantern and leaves bread beside the beds and a lot of oil in the lantern, and leaves.

He left to go to the headmasters house that I mentioned earlier. He started running in the morning, and didn't stop until he got there. He passed out when he got to the house. When he woke up, he saw Mr. Hendricks, the headmaster, and another friend, Mr. Talbot. Mr. Talbot was a population police official, but he was double crossing the population police. He had a third child, but she had died in a rally demanding rights for third children. Mr. Talbot had been discovered and put in prison until he was rescued. Mr. Talbot's wife was at the house, also.

It turned out that Mrs. Talbot was a doctor, so they got her car, and went to get Percy and Alia. When they got there, though, Percy and Alia were not there. Suddenly, more gunfire erupts. More rebels had come and ambushed population police officials. There were three police. Two of the were dead in the first strike.
But, the third had taken cover, adn was returning fire. Matthias ran to the car, and told the official to get in. He did, and Matthias took off. The Population Police man asked Matthias his name, and what he was doing. Matthias told him that he was going to join the Population Police( but he didn't tell him that he was going to sabotage it ?). So, Matthias had joined the Population Police.

To here the rest, you need to read the book.

a reader #1 Reviewer 20047 reviews
Report this review Comments (0) | Was this review helpful to you? 0 0
An adventurous, yet mysterious story
October 16, 2008
Overall rating
5.0
Plot/Characters/Writing Style
5.0
Illustrations/Photos (if applicable)
0.0
Reader reviewed by Abby

Trey goes through a series a events, dangerous events leading him to find that "adventurous" side. So if you have a thing for action or myster, you should deffinately read Among the Enemy by Margaret Haddix.

Olivia Farr, Staff Reviewer
"WHEN I GROW UP, I WANT TO DRIVE... is a cute lift-the-flap adventure of different work vehicles in action. On..."

Karen Yingling, Staff Reviewer
"Billy Chan has gotten an invitation to attend Camp Dragon, a cultural and language school in China, so his parents..."

Karen Yingling, Staff Reviewer
"Yara and her younger brother Saad are in a refugee camp in Jordan in 2016, waiting to hear what their..."