The Curse of the King (Seven Wonders Book 4) 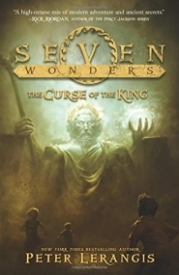 Percy Jackson meets Indiana Jones in the New York Times bestselling epic adventure Seven Wonders! The Curse of the King is the fourth book in a seven-book series by master storyteller Peter Lerangis. This sequel to The Tomb of Shadows, Lost in Babylon, and The Colossus Rises chronicles the adventures of Jack McKinley and his friends as they face their greatest challenge yet—the long-lost Statue of Zeus. In their struggle to undo what's been done and unlock the secrets of this Wonder of the Ancient World, our heroes must confront gods, relive old battles, and face down their own destiny to save themselves—and the world—from destruction.
Tweet

Ultimate adventure of the fantastical kind
July 28, 2015
Overall rating
4.5
Plot/Characters/Writing Style
5.0
Illustrations/Photos (if applicable)
4.0
For the love of all that is Greek, hold onto your hats as you break open the fourth installment to the Seven Wonders series, CURSE OF THE KING by Peter Lerangis! Jack McKinley and his band of Select just cannot get a break. After barely escaping with their lives in Book 3, Jack tries to find some semblance of normalcy. But how can a kid do that when their fourteenth birthday--also known as The Day You Die Day—is just around the corner. Collecting all the Loculi is the ONLY option. Problem is, one has already been destroyed, Jack has two of them, and the others are Gods knows where!

With Cass in tow, Jack talks his dad into taking them to California where Aly lives. They need her. Like STAT. Especially after a skype call with Aly ended after she passed out on screen. Her fourteenth birthday is coming, too. Jack knows something bad has happened to Aly and they need to get the diminishing shard of the Loculi of Healing to Aly before they lose her.
From there, Jack and his crew need to find a way to get the other Loculi before it’s too late.

Each passing day is one day closer to their ill-fated fourteenth. Old friends are found, centuries-old statues come to life spouting TV lines, and those once thought to be enemies might actually be the key to everything. Bonds are tested, friendships are stretched, and wits are matched as the Select battle to beat the clock. Can Jack’s mother be trusted? Does she really care? And is Massa really as bad as they thought?

As noted in other reviews of the previous books, if you’re a fan of Percy Jackson, Seven Wonders is right up your Greekish alley. From beginning to end, Seven Wonders is a non-stop ride of adventure, monsters, magic, and the bonds of true friendship. The pacing never slows to a crawl at any place during the book. It’s definitely a good sit-down-and-do-nothing-for-the-rest-of-the-day kind of book. I say this because once you start, you’re going to need to finish.

Each of the characters is engaging and lovable with clear voices. If I could pick a literary hero to be my kid brother, it would be our narrator, Jack McKinley. He’s a bit of a nerd, no way near any sort of hero material, but he has a great head, is crazy loyal to his friends, smart, funny, and just all around adorkable. Jack is a kid, he makes mistakes. Sometimes of the epically stupid kind, but that’s part of growing up. His voice is very true for a believable almost-fourteen-year-old. In fact, he’s even more “fourteen-ish” than Percy. Loads of times, I felt Percy Jackson sound a bit old for his literary age. Not so with Jack.

Even Cass and Aly are very clear through the pages. They each have a distinct voice that stays consistent through their journey. I love the little ticks they have! Cass, Jack's "adoptive" brother speaks fluent backwardish, which is hilarious, especially when others are trying to figure out what Cass just said while others are just like, "Totally!" And Aly, the tech wiz, has a tendency to get all technical, explaining in great detail how to hack a system, leaving everyone staring at her with a blank.

Really, the only voice I don't particularly care for is Marco. I think Lerangis could have dug a little deeper with him. The jock with a California beach drawl is terribly cliché and I found myself skipping his input because of it.

The storyline, however, is fantastic. It's the perfect kind of adventure book that reminds me a bit of The Goonies, if only in feel. A group of kids with particular skills set off to save the world and themselves as adults pretty much just look on from the sidelines. EPIC! It's insane, would never happen in the real world, but that's what makes books like Curse of the King amazing to read. I can't imagine ANY thirteen to fourteen year-old who wouldn't want to have a parent-free adventure. It's not just that either. The adults even sometimes take their queues from Jack's crew, and that makes my inner teen squeal with delight! Talk my folks into flying me cross-country, totally ditching school, to save a friend? Sure, no problem, Kiddo. How about going out on a near impossible journey to retrieve ancient relics that will save our lives, which also happens to include the potential of being caught by The Big Bad, AND we do this alone? Done. Yup. Sign me up!

Curse of the King is an extraordinary adventure with a sprinkling of moral lessons we all should learn. It's a fast-paced, exciting, unputdownable trek into the legends of Atlantis with Jack and his best team imaginable: his best friends in the whole world. What more could a kid want?