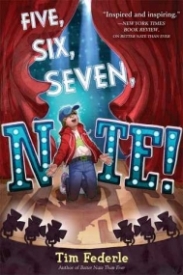 Nate Foster's Broadway dreams are finally coming true. Armed with a one-way ticket to New York City, small-town theater geek Nate is off to start rehearsals for E.T.: The Broadway Musical . It's everything he ever practiced his autograph for! But as thrilling as Broadway is, rehearsals are nothing like Nate expects: full of intimidating child start, cutthroat understudies, and a director who can't even remember Nate's name. Now, as the countdown to opening night is starting to feel more like a time bomb, Nate is going to need more than his lucky rabbit's foot if he ever wants to see his name in lights. He may even need a showbiz miracle.
Tweet

Fabulous, Darling!
May 09, 2014
Overall rating
5.0
Plot/Characters/Writing Style
5.0
Illustrations/Photos (if applicable)
N/A
Federle’s debut Better Nate Than Ever totally charmed me. As such, I was, for once, thrilled to learn of a sequel. However, it came out in hardcover with no word on the audio. I decided to wait, and I have been rewarded. Federle’s performance is just as perfect for his story as it was the first time around, and I’m glad I waited. I am of the opinion that Five, Six, Seven, Nate! is, if anything, even better than its predecessor, which was already a delight.

Nate’s off to New York City for his first Broadway performance. He’s so ready for this. Sure, he’s an understudy, but an understudy to a lead role! Of course, he gets there and he learns he’s actually the SECOND understudy. Basically, Nate had dreams of suddenly becoming awesome and beloved like I did when I went off to college. He thought a star would be born immediately, but life is not that easy. Actually, most people are mean to him, he’s a terrible dancer, and he’s being cut from the chorus parts left and right.

All of this happens with Nate’s trademark humor. He continues to swear with Broadway flops, and is delightfully judgmental of both himself and others. I really love how much Nate remains himself while also growing in the course of the novel. He’s coming of age in a lot of ways, but the core of who he is remains consistent. Nate’s also a really flawed guy, which I love. He’s not the nicest person sometimes, but he just feels so real. Plus, he’s young and he’s learning.

One of the best aspects of the book was Nate’s friendship/mentorship with Asella, a veteran actress. They both learn from each other, and it’s just so adorable how he bonds with this much older woman. In fact, I loved the way the book highlighted the different skill sets people have. Nate’s not a great dancer, not the best singer, and his looks don’t really scream leading man (or boy). However, he does have an amazing memory, and basically makes the best understudy ever. There are things he can be amazing at. The one thing I wasn’t as sold on was that Nate does get his dream (in a limited way) of being a star through some shenanigans. On the one hand, that’s what the reader wants to see; it’s nice to see Nate succeed and achieve his dreams. But, at the same time, I was loving the props given to being an understudy, and I felt like that was undercut a bit.

All the details about training for Broadway and the production of the show were so awesome to read about. It’s sort of like Smash, only better, middle grade, hilarious and not full of relationship drama. Obviously, I knew Broadway shows were productions, but this show seems like a hot mess a lot of the time. I’m side-eying this musical, which is totally intentional on Federle’s part, but it’s fun and cool to learn more than I knew before.

Finally, Nate gets his first romance and it is a-freaking-dorable. He has a secret admirer and I don’t want to spoil what happens, but it’s the cutest. Literally, I finished the audiobook and went AWWW for like two minutes, because so damn sweet.

Olivia Farr, Staff Reviewer
"ZOE ROSENTHAL IS NOT LAWFUL GOOD is a fun YA contemporary about embracing what you love and finding your people...."

Samantha Randolph, Promotions Manager
"While being forced to clean an old room in her Catholic school, Maeve finds an old tarot deck that instantly..."

Olivia Farr, Staff Reviewer
"JUST OUR LUCK is a charming YA contemporary about loss, anxiety, and friendship. Leo is a bit of a loner,..."

Olivia Farr, Staff Reviewer
"FLAMEFALL is the absolutely stunning and enthralling sequel to FIREBORNE, and the second in the Aurelian Cycle trilogy. The book..."