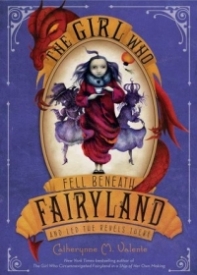 “One of the most extraordinary works of fantasy, for adults or children, published so far this century.”—Time magazine, on the Fairyland series September has longed to return to Fairyland after her first adventure there. And when she finally does, she learns that its inhabitants have been losing their shadows—and their magic—to the world of Fairyland Below. This underworld has a new ruler: Halloween, the Hollow Queen, who is September’s shadow. And Halloween does not want to give Fairyland’s shadows back. Fans of Valente’s bestselling, first Fairyland book will revel in the lush setting, characters, and language of September’s journey, all brought to life by fine artist Ana Juan. Readers will also welcome back good friends Ell, the Wyverary, and the boy Saturday. But in Fairyland Below, even the best of friends aren’t always what they seem. . . .
Tweet

Enchanting
October 09, 2013
Overall rating
5.0
Plot/Characters/Writing Style
5.0
Illustrations/Photos (if applicable)
N/A
What I Liked:
Catherynne M. Valente’s Fairyland trilogy recalls classic tales very clearly, but, rather than coming across as redundant, Valente weaves them together into something wholly new. The Girl Who Fell Beneath Fairyland and Led the Revels There (TGWFBF for short) dives back into the vibrant world of Fairyland, adding further depth and wonder to an already glorious world.

At the novel’s opening, September remains in Nebraska, impatiently waiting some summons to return to Fairyland. As the days pass, September becomes increasingly glum, missing her father, off fighting in WWII, and her Fairyland friends. What immediately becomes apparent is that our little September has done some maturing in her time since the last book. Though still grumpier than average, now thirteen, September’s a bit softer than she once was. Much as I loved the grouchy, irascible September, I love seeing characters mature, and the way that having such wonderful friends has helped her grow.

Now, I’m going to take a bit of an aside, as I seem to have a tendency to do in Valente reviews; I blame her, and the way her words inspire me. In the first book, Valente describes children as heartless. In TGWFBF, she describes teens this way:

"For though, as we have said, all children are heartless, this is not precisely true of teenagers. Teenage hearts are raw and new, fast and fierce, and they do not know their own strength. Neither do they know reason or restraint, and if you want to know the truth, a goodly number of grown-up hearts never learn it."

To some, these designations may seem rather heartless in and of themselves. Keep in mind, however, that TGWFBF is largely metaphorical. Young children do not have fully developed minds, senses of right and wrong, or, in Freudian terms, ego, which leads to that cruelty that can be witnessed in children. Teens have grown so much, but they’re not settled. They’re learning, but everything is new, confusing, awkward, and they don’t necessarily have all the information and experience necessary to parse experiences both emotional and otherwise.

To digress further, the reason I love this quote so very much is that I think it encapsulates why I, as an adult, find young adult, and sometimes even middle grade fiction, so compelling. Yes, there are other factors as well, like the creativity and subject matter, but that right there is a big reason. Though I’m a decade out from 16 now, I often identify more with these teen heroines than the ones I find in adult fiction. Partly, this is market-driven, but it also correlates to the phase of life I’m in. What it comes down to is that teen hearts and adult hearts are not that far removed, necessarily.

Almost the entirety of TGWFBF occurs in this shadow world beneath Fairyland, and September spends her time with shadows of her friends, former enemies, and herself. Valente uses the shadows to make a deep comment about what lies within each person. The shadows represent the selves that we keep hidden below the surface. Hesitant people would have impulsive shadows, for instance. TGWFBF beautifully highlights the fact that, whatever we may show on the surface, everyone’s made up of all the same things. We’re all capable of good or of evil.

In TGWFBF, the fact that Fairyland is a mental escape for September from the harsh realities of her real life in wartime becomes much more apparent. Where September and her mother scrape by on rations in Nebraska, she can feast on delicious things in Fairyland. As her worries at hearing nothing from her father increase, she descends into the magical landscape as a way of distracting herself. It’s a rather similar narrative device to the one used in Chronicles of Narnia, but much more subtly and fancifully done.

What Left Me Wanting More:
The cast of characters delights and entrances. The one drawback I had, though, was that I didn’t quite get the emotional engagement this time, as September spent her time with the shadow versions of her dear friends, and I missed them. However, the shadows really opened up Maud, the villain of the first book. Villains so often get passed over characterization-wise, but Valente continues to build out her motivations even from the start made in the first book.

The Final Verdict:
Though the Fairyland series is marketed as a middle grade series, do not let that stop readers of any age. Adults, read this without shame, as you should anything, and teens as well. Valente’s Fairyland series is intricate, clever, and jaw-droppingly magical, and all portrayed with some of the most gorgeous writing I’ve ever had the pleasure to read.