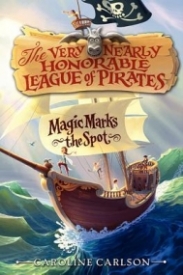 Pirates! Magic! Treasure! A gargoyle? Caroline Carlson's hilarious tween novel The Very Nearly Honorable League of Pirates #1: Magic Marks the Spot is perfect for fans of Lemony Snicket's Series of Unfortunate Events and Trenton Lee Stewart's Mysterious Benedict Society. Hilary Westfield has always dreamed of being a pirate. She can tread water for thirty-seven minutes. She can tie a knot faster than a fleet of sailors, and she already owns a rather pointy sword. There's only one problem: The Very Nearly Honorable League of Pirates refuses to let any girl join their ranks of scourges and scallywags. But Hilary is not the kind of girl to take no for answer. To escape a life of petticoats and politeness at her stuffy finishing school, Hilary sets out in search of her own seaworthy adventure, where she gets swept up in a madcap quest involving a map without an X, a magical treasure that likely doesn't exist, a talking gargoyle, a crew of misfit scallywags, and the most treacherous—and unexpected—villain on the High Seas. Written with uproarious wit and an inviting storyteller tone, the first book in Caroline Carlson's quirky seafaring series is a piratical tale like no other.

Good Book Ahoy!
September 10, 2013
Overall rating
5.0
Plot/Characters/Writing Style
5.0
Illustrations/Photos (if applicable)
N/A
What I Liked:
After my last middle grade was such a terrible dud, I was a bit afraid to embark into these pirate-laden waters. What if I felt like they'd shivered the timbers of these books unfairly, robbing them of a better life for inferior content? Or stole away my precious time, better spent with other books? Thankfully, Caroline Carlson's pirates aren't such vicious fiends. They're quite honorable, as pirates go anyway, and entirely lovable. Magic Marks the Spot is pretty close to perfect for what I want from a light-hearted middle grade: humorous, populated by lively characters, and promoting the idea that both boys and girls are capable of the same sorts of things.

Before I even got to page one, Magic Marks the Spot had already made me smile and snort. See, before the page numbers even start counting, there are several pages of letters, which set the tone for the rest of the novel. In fact, letters, documents, and snippets of books are woven brilliantly throughout the novel, a technique often used, but rarely done to quite so enjoyable effect.

Hilary Westfield receives a letter congratulating her on her acceptance to the Very Nearly Honorable League of Pirates' Piracy Apprenticeship Program and telling her that the program will change her from "a wide-eyed and innocent young man." Hilary writes back, informing them of her excitement and correcting them on a factual error: namely, she's a girl. The VNHLP writes back aghast and offended, forwarding her application on to Miss Pimm's Finishing School for Delicate Ladies, much to Hilary's disgust. In her final response to the VNHLP, she closes with this:

"I assure you that I will walk the plank a thousand times, into cold and shark-infested waters, before I will attend Miss Pimm's.

I remain,
Hilary Westfield
Really Quite Furious with You"

From that moment on, I was in love with this book and its characters. Hilary is a fantastically sassy girl who refuses to let anyone, be they parent, headmistress or pirate, tell her what her gender means she can and cannot do. Magic Marks the Spot is so girl-positive and anti-stereotypes. Pirates can be friendly, girls can be pirates, boys can sew without it doing them a lick of harm, governesses can be sassy, and old ladies can be badasses. These are excellent lessons for the intended age group, and are conveyed in a totally non-preachy way.

Though almost everyone she meets tells Hilary she cannot be a pirate because of her gender and social standing, she does not give up. She has a dream and will not let anyone stop her from getting there. Plus, she has a plucky gargoyle sidekick to help cheer her up when times get rough, like when she's forced to attend Mrs. Pimm's, which teaches courses like etiquette and fainting. Gargoyle is so completely precious, with his desire for ear scratches and dream of one day having a pirate hat.

Hilary's governess, introduced as a rather drab, formidable figure, turns out to be wholly delightful as well. As soon as she ceases being Hilary's governess, she's able to open up to Hilary and truly be a friend. Eloise Greyson is a wonderful human being, and I totally support the ship of her with the pirate captain Jasper, Terror of the Southlands. He's basically the most lovable pirate after Captain Shakespeare from Stardust. Oh, and Charlie, his first made is adorably awkward, and I am waiting for some super cute middle grade romance to happen later.

What Left Me Wanting More:
The one aspect that had me side-eyeing the book was how unaffected Hilary is to learn that her father is the bad guy. Yes, he's not been the most supportive parent ever, but she's sad for like five minutes and then is completely unaffected for the rest of the book. Admiral Westfield was not so terrible that a daughter wouldn't struggle to accept his villainy or be tempted to join up with him. Hilary's a strong girl, so I don't doubt that she would make the same choices, but I would have liked to see her feel more in response to what is a completely groundbreaking change for a child.

The Final Verdict:
Magic Marks the Spot kept me grinning and laughing the whole way through. There's situational humor, sarcasm everywhere, and silly puns. Basically, it's perfection for me and other people who have the sense of humor of a ten year old, like, say, actual ten year olds. I see this being a huge hit with the intended audience, but it's a delight for an older reader as well.

Samantha Randolph, Promotions Manager
"Top 3 reasons to read LIKE SISTERS ON THE HOMEFRONT: 1.) The characters- Gayle, a NYC girl sent to..."

Daphne and Velma: The Vanishing Girl
3.7

Samantha Randolph, Promotions Manager
"Felix has never been in love, but he wants to be. He wants the experience of opening your heart, having..."

Samantha Randolph, Promotions Manager
"Eileen, Claire, and Murphy Sullivan used to be close. They had their special traditions, their shared laughs, and their shared..."

The Summer of Impossibilities
3.7

Olivia Farr, Staff Reviewer
"THE SUMMER OF IMPOSSIBILITIES is a YA contemporary about friendship in the vein of THE SISTERHOOD OF THE TRAVELING PANTS...."

Tarnished Are the Stars
4.3

Stephanie Augustine, Staff Reviewer
"FEEDBACK I actually really enjoyed this story. The beginning was a little confusing because there wasn’t too much explanation of..."

Kim Baccellia, Staff Reviewer
"San Solano, Texas is not only known for its Southern charm but also gruesome murders that took place fifty..."