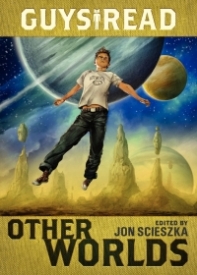 "Other Worlds," the fourth volume in Jon Scieszka’s Guys Read anthology series for tween boys, features ten thrilling new tales of science fiction and fantasy from some of the biggest names in children’s literature. Prepare yourself for ten trips into the unknown, as ten of your favorite writers — Rick Riordan, who has written an all-new and exclusive Percy Jackson tale, Tom Angleberger of Origami Yoda fame, Newbery medalist Rebecca Stead, Shannon Hale, D. J. MacHale, Eric Nylund, Kenneth Oppel, Neal Shusterman, Shaun Tan, and none other than the late Ray Bradbury — spin tales of fantasy and science fiction the likes of which you have never imagined. Compiled by National Ambassador for Children’s Literature (and Secret Ambassador for the Intergalactic Alliance) Jon Scieszka, "Guys Read: Other Worlds" is sure to boldly take you where no reader has gone before.

Great Choice for Reluctant Readers!
October 10, 2013 (Updated: October 10, 2013)
Overall rating
4.0
Plot/Characters/Writing Style
4.0
Illustrations/Photos (if applicable)
N/A
Guys Read: Other Worlds is a collection of fast-paced stories that will appeal to reluctant young readers, of either gender.

Breakdown of the stories:
“Percy Jackson and the Singer of Apollo” by Rick Riordan: Okay, so I’m actually not the biggest Percy Jackson fan. I’ve read the first two and they were alright, but then I gave up on the series out of disinterest. The story here is pretty consistent with what I remember. Fun and silly and totally up the pre-teen humor alley, complete with a pantsing. However, I’m also now convinced I should give good ol’ PJ another try at some point, because Jesse Bernstein does a fantastic job narrating.

“Bouncing the Grinning Goat” by Shannon Hale: In case you were wondering why I decided to listen to an audiobook purportedly for guys, and young ones at that, this right here is the reason. I love Shannon Hale’s books, so as soon as I saw her name on this, I knew I had to listen. As usual, Shannon’s story centers around a sassy, young heroine, which I am glad to see, because, yeah, boys can read about girls! The plot was a little bit too far-fetched for me with a young girl who ran away from home pretending to have magical powers so she can work as a bouncer. It’s funny, but not really in a way that works all that well for me. I imagine kids might be more entranced however.

“The Scout” by D. J. MacHale: In “The Scout,” a scout troop goes on a grueling hike and then is left to make their way back to base in two groups. Kit is all, naw man, I’ll come back on my own, and sneaks off from his group. While camping on his own, he spots an alien ship crash-landing. “The Scout” appeals to action-adventure fans, which isn’t usually my thing, but this actually got pretty high concept too.

“Rise of the RoboShoes” by Tom Angleberger: This is basically what it sounds like: a story about RoboShoes and how their society rises and falls. It’s only eight minutes long, so that’s good. Honestly, I’m too old for this. I can see where kids would think it was hilarious, but not for me.

“The Dirt on Our Shoes” by Neal Shusterman: Shusterman’s story follows more typical science fiction lines, with a story much like Across the Universe or Starglass. Tanner lives aboard T-Bin, a spaceship heading out to colonize a new planet. As the ship gets closer, certain events make Tanner suspicious that perhaps they’re not meant to colonize it after all. DUN DUN DUN. I was really enjoying this one, but then it ended with more fecal matter then I’m entirely comfortable with. Poop jokes are one of those things that aren’t as funny post-childhood.

“A Day in the Life” by Shaun Tan: This story is all of a minute long. I’m fairly certain this must be a graphic novel in the print version, because it sure as hell does not make a ton of sense in the audio version. I’m especially not hearing the sci fi or fantasy elements. This might be cool in print, but it did not transition well.

“Plan B” by Rebecca Stead: CATS IN SPACE. This has been my favorite story so far. A boy locked in his room slowly unravels the story of why he’s locked in his room, a story which gets crazier every moment. This totally took me back to one of my favorite movies when I was a kid, The Cat from Outer Space.

“The Klack Bros. Museum” by Kenneth Oppel: A kid and his dad go to a seriously creepy museum in the middle of nowhere. Then the townie who runs it offers to by the kid so that he can keep the museum’s ghost company. Points off for there being so many reasons the father should have thought better of accepting a ride to a tiny museum from a creepy old guy who just happened to be going for long enough to take them and bring them back. IT’S A TRAP.

“The Warlords of Recess” by Eric S. Nylund: The premise of this story actually reminds me of Red Rain, only this one’s funny ON PURPOSE. That’s an important distinction. Anyway, aliens are running a test attack of the earth to determine whether they should launch a full-scale attack. If they are defeated three times by a sample army, they’ll leave with well wishes for the planet. The forces they will be fighting: an elementary school at recess. Totally realistic, right? Two nerds save the day when they figure out the aliens’ weak spot.

What Left Me Questioning:
Since the series began, I’ve been keeping an eye on the Guys Read books. In theory, it’s a great idea, because more boys should be reading for fun. However, by marketing them as “guy” books, girls are being excluded and it’s continuing the idea that books are gendered. This story is ONLY for girls, and this one is ONLY for boys. As a concept, that needs to die, as it’s based on the sexist values inculcated in our society. They’re clearly making some effort to mold young minds in a good way, based on the inclusion of two female authors and one female MC, but the name itself is still troublesome.

Note: My review copy lacked “Frost and Fire,” a short story by Ray Bradbury that was included in the collection, so I can’t comment on that.

The Final Verdict:
On the whole, I’m forced to admit that I’m a little bit too old for Guys Read: Other Worlds, but I’ve been curious about the series anyway and I’m glad I checked it out. Most of the stories were still quite entertaining, even if I’m not the target audience. Plus, unlike many multiple voice narration efforts, each narrator seemed well-matched to the story. Though I question the gendered marketing, this is a great read for middle graders.

Christina Franke, Staff Top 10 Reviewer 678 reviews
Report this review Comments (0) | Was this review helpful to you? 0 0
Take a Trip to These 'Other Worlds'
August 17, 2013
Overall rating
4.0
Plot/Characters/Writing Style
4.0
Illustrations/Photos (if applicable)
N/A
In all honesty, I had never read an anthology of short stories for middle grade readers before I picked up “Guys Read: Other Worlds” that Jon Scieszka put together. I was hesitant at first, but after diving into this book, I realized my hesitations weren’t needed for a single second.

Scieszka picked a great selection of sci-fi and fantasy stories, and he paced them well. Scieszka gets young readers hooked right off the bat with a familiar writer and a popular character as Rick Riordan kicks off the stories with a light-hearted Percy Jackson adventure. From there Scieszka offers a diverse mix of funny fare (Tom Angleberger’s tale of robotic shoes that take over the world) to more spooky and tense stories (Kenneth Oppel’s “The Klack Bros. Museum” in which a boy is followed around by a potentially menacing ghost). I was extremely impressed by Scieszka’s addition of Ray Bradbury at the very end. He picked an extremely interesting short story of Bradbury’s, showing young readers that authors recommended by teachers don’t have to be boring!

After such a great MG anthology experience, I’m definitely looking into the other Guys Read collections.
Good Points
Great mix of sci-fi and fantasy stories.
A range in tone from extremely funny to really freaky.
An exciting introduction for young readers to Ray Bradbury.

Jason Gallaher Top 50 Reviewer 106 reviews
Report this review Comments (0) | Was this review helpful to you? 0 0