The Apprentices (The Apothecary #2) 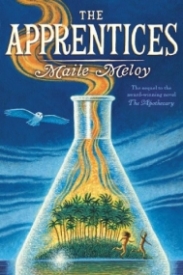 Two years have passed since Janie Scott last saw Benjamin Burrows, the mysterious apothecary’s defiant son who stole her heart. On the other side of the world, Benjamin and his father are treating the sick and wounded in the war-torn jungles of Vietnam. But Benjamin has also been experimenting with a magical new formula that allows him to communicate with Janie across the globe. When Benjamin discovers that she's in trouble, he calls on their friend Pip for help. The three friends are thrown into a desperate chase around the world to find one another, while unraveling the mystery of what threatens them all.

Improves on The Apothecary!
June 07, 2013
Overall rating
4.0
Plot/Characters/Writing Style
4.0
Illustrations/Photos (if applicable)
N/A
What I Loved:
Oh, the joys of an unsolicited ARC that turns out to be the sequel to a book you enjoyed. Prior to the arrival of this book on my doorstep, I had no idea that there would be a sequel to The Apothecary, nor did I have a specific hankering for one. However, since I did like the first, I was excited to discover what would transpire in this installment. Well, lucky me, The Apprentices is an even better read than The Apothecary, maturer in plot, writing and characterization.

Where The Apothecary was very much a middle grade novel, clearly skewing to a younger audience, The Apprentices could really have been published for either middle graders or young adults. Two years have passed since the ending of The Apothecary, bringing Janie from fourteen years old to sixteen. Janie, Benjamin, and Pip have all grown up in the gap between the two novels, still their charming selves but a bit wiser.

Despite the maturer tone, The Apprentices retains the magic of The Apothecary. Once again, evil forces are at work, attempting to do evil things involving atomic bombs and it's up to the apothecary, his son Benjamin, and Benjamin's friends to save the day. Using a book called the Pharmacopoeia, they can create potions that make the improbable possible. For example, they can become birds, much like in The Sword in the Stone.

On top of that, The Apprentices is also historical fiction. In the first book, Janie's parents had moved to England to escape the Red Scare, as they worked in the entertainment industry. The Cold War is still going strong in The Apprentices. In fact, Meloy even touches on tensions in Vietnam, China and North Korea. I love how she weaves the historical elements in, without beating the reader over the head with them.

Meloy's characters are a lot of fun. Janie is brilliant and determined, more concerned with figuring out how to desalinate water than boys. Though she does have fond memories of Benjamin, who left her alone for two years, and another potential suitor in the handsom Raffaello, romance stuff really isn't at the top of her mind. In fact, Benjamin actually spends more of his time thinking about her, worrying that she might have found another boy in his absence. He, too, is incredibly clever, becoming the heir to his father in apothecral (this does not appear to be a word, but I shall make it so) talents.

Pip doesn't spend much time on screen (on page?) in The Apprentices, but he still manages to steal the show. Now a television star in England, he's got a posher accent than before, but he's still the same short, cheeky lad. Enlisted to go find and save Janie in America, he gets cheap passage on a cruise ship in exchange for keeping the daughters of the wealthy entertained. The contacts he makes turn out to be hilarious plot points. No one can resist Pip's exuberant charm.

What Left Me Wanting More:
The sections following Jin Lo felt a bit out of place, as she otherwise ranks with the adults. I found my attention wandering in those chapters.

The Final Verdict:
If you enjoyed The Apothecary, you will not want to miss Meloy's follow up, which exceeds its predecessor, a rarity in sequels. There's action, a bit of romance, history and humor. The Apprentices is a great read for children, teens and adults alike.