One Plus One Equals Blue 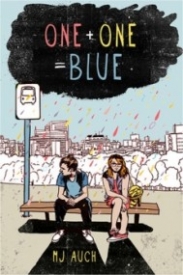 Twelve year-old Basil knows he’s special—he’s been associating numbers with colors since he was a kid. His gift (or curse) has turned him into somewhat of a loner, but his world begins to change when he meets Tenzie, the new girl in school who has similar freakisms. She, too, has synesthesia (a condition in which one type of stimulation evokes the sensation of another). At first, Basil is somewhat annoyed with Tenzie’s pushiness, but after Basil’s estranged mother returns, his life is turned upside down . . . and Tenzie may be the only person to help him put it back together again.

Once again, MJ Auch has written a thoughtful coming-of-age novel that explores friendship, family, and fitting in.
Tweet

A Touching Story of Family and Friendship
April 30, 2013 (Updated: April 30, 2013)
Overall rating
4.0
Plot/Characters/Writing Style
4.0
Illustrations/Photos (if applicable)
N/A
What I Loved:
What lured me to One Plus One Equals Blue was the fact that the two main characters both have synesthesia, which I find fascinating and magical. Though One Plus One Equals Blue did not turn out to focus heavily on synesthesia itself, this novel is still a great read, and one sure to please middle grade readers. Auch's novel focuses primarily on accepting oneself and learning to appreciate the good things in life.

Since I read so much young adult fiction, it's always nice to read middle grade, which generally focuses more on family dynamics and friendship than on romance. Basil Feeney is an outcast. Having been homsechooled up until the seventh grade, he had little chance of popularity. However, what sealed his fate as the biggest loser in school was when he told his friend why he was so bad at math: the numbers appear to him as colors, and some of the colors are repeated. Ever since, he's been a freak, isolated from everyone else.

When a weird new girl, Tenzie, arrives, she throws his world for a loop. She sits at his lunch table (errr, desk), joins him on the bus, and invites herself over after school. Tenzie is just about the biggest pest he could ever imagine, and the cover captures his early attitude perfectly. He doesn't want her to get him noticed, and doesn't want to get close to her only to have her make fun of him later for being a freak. Plus, she takes his grandmother's attention away from him where it belongs.

When he realizes that she also sees numbers as colors, though, they really begin to develop a friendship. With some research, he realizes that they are not alone, and that what they are is synesthetic. I loved that, though they had somewhat similar synesthesia, it functioned quite differently for both of them, giving me a better idea of how varied synesthesia can be. The story shifts then from his friendship with Tenzie, though they do continue to grow closer throughout, with little setbacks along the way. Their friendship is very well-handled.

The rest of the book focuses on Basil's, and to a lesser degree Tenzie's, familial relationships. Basil never knew his father, was abandoned by his mother who went to Hollywood to pursue her dreams of being a star, and was raised by his Gram. Shortly after his life was changed by the introduction of the indefatigable Tenzie, he's thrown for a loop once again, when his mother makes her first appearance in seven years.

What Left Me Wanting More:
Carly Feeney is every bit the unreliable, neglectful mother so common in fiction. She has itchy feet, and likes the idea of being a caring mother much better than the reality of a sulky kid, which, even at the best of times, Basil rather is. Carly sweeps everyone else off their feet, though, helping out with the school play. Tenzie, especially, looks up to Carly, desperate for affection and affection, since her parents ignore her. Basil is torn between hope that his mom will finally love him and wishing she would just leave. All the poor parenting is a bit trite, but at least Basil's grandmother is loving and supportive, and also a totally awesome hippie, who listens to The Beatles and makes stained glass.

The Final Verdict:
With well-drawn characters and realistic emotional arcs, One Plus One Equals Blue is a touching story of teenage outcasts finding one another and coming to terms with their family situations.