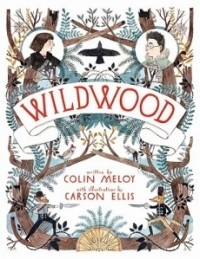 The first book in the epic middle-grade fantasy series full of magic, wonder, and danger—nothing less than an American Narnia—from Colin Meloy, lead singer of the highly celebrated band the Decemberists, and Carson Ellis, the acclaimed illustrator of the New York Times bestselling The Mysterious Benedict Society.
Tweet

Does Not Read Like a Middle Grade Novel
October 22, 2012 (Updated: October 22, 2012)
Overall rating
3.0
Plot/Characters/Writing Style
3.0
Illustrations/Photos (if applicable)
N/A
I finally finished! I had been so looking forward to a nice swift read. I mean, middle grade novels go so quickly. Not this one, mostly because I don't really think it's a middle grade novel at all, despite the publishers marketing of it to ages 8+. This book has been on my radar for ages because of my Decemberists obsession. My blog's name is even a paraphrase of a line from one of their songs. For those who don't know, Colin Meloy is the lead singer. While, I did like the book, I definitely prefer his music.

First, I must address my assertion that this does not strike me as a book for the average eight year old. While I am sure that some enterprising eight year olds might appreciate Wildwood, most would be exceedingly confused. Meloy uses eloquent, occasionally old-fashioned language, and I suspect that the book would be abandoned for lack of understanding. Few kids commit to books if a dictionary is required for comprehension. Some reviewers found the language overblown and thought it read as though Meloy had closely befriended a thesaurus during the novel's construction. I felt that it had a natural flow, but do still think it will scare away many readers. I just don't think a kids' book would use the word 'apocryphal' in the first couple of chapters without any explanation. There is also quite a bit of violence and animal death that might scar younger readers.

The plotting struck me as a cross between the cult classic Labyrinth and The Lion, the Witch and the Wardrobe. The book opens with the theft of a much younger sibling from the daughter who spends a lot of time babysitting. Unlike Jennifer Connelly's character, Prue loves her baby brother and was not being particularly inattentive. A murder of crows swoops down and absconds with him before she can do anything, taking him off to the evil leader in the forest.

Prue wants to head after him immediately, but in an oddly rational move decides to wait for the morning, pretending to her parents that her brother is there and asleep. She ventures out early the next morning, leaves a note saying she and Mac, her brother, have gone for another bike ride, and sets off into the creepy forest (the Impassable Wilderness). She gains a companion in Curtis, the nerdy kid in class who won't stop drawing superheroes even though, at 12, he should be beyong that now. Curtis follows her, even when she orders him not to. This was a bit awkward, as there seemed little reason for him to be so concerned with accompanying her, other than perhaps desperation for friendship with someone.

Once in Wildwood, the two kids become embroiled in the political drama of this hidden world. The borders of the forest are supposed to prevent entry, but these kids are special, of course. Curtis and Prue are separated, when Curtis is captured by coyote soldiers. Prue continues on alone, now needing to rescue both her brother and classmate. As in Narnia, an evil ruler attempts to take over via nefarious plan. Also like Narnia, there are humans and talking, clothes-wearing animals living in company. At least there's no allegory in this one!

Sadly, the characters did not enliven the story either. They do an awful lot of monologuing and info-dumping. On top of that, people and animals lack depth. I just know so little even about Curtis and Prue, who I should know best. I know what they like to draw and how they react in crises. Did they have no other interests? There's a large cast and, while I was fairly entertained, I didn't care about any creature, human or otherwise.

What really ticked me off were the parents. First off, I find it highly suspect that, even when things were normal, Prue, age 12, spent all day watching her brother, and, not babysitting at home, but pulling him along in a red wagon behind her bike. Would parents really allow their baby to be out all day? Then, later, Prue does return for a little bit, and, when she says she's going back, they don't stop her or even try to go with her. What the hell is that? This isn't like Narnia where you've hardly missed any time. Parenting job #1: Do everything you can to protect your child. I just could not handle any of this.

Nothing felt especially original to me, but Wildwood was still entertaining. Given its length, though, only the most determined will likely make it through. I will be listening to the next one on audio, as it's narrated by Colin himself, and I hope for a bit more verve and innovation.

No Way, They Were Gay?: Hidden Lives and Secret Loves (Queer History Project)
5.0