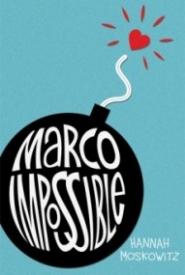 Thirteen-year-old best friends Stephen and Marco attempt a go-for-broke heist to break into the high school prom and get Marco onstage to confess his love for (and hopefully steal the heart of) Benji, the adorable exchange student and bass player of the prom band. Of course, things don't always go according to plan, and every heist comes with its fair share of hijinks.
Tweet

Touching Look at Friendship
March 18, 2013
Overall rating
4.0
Plot/Characters/Writing Style
4.0
Illustrations/Photos (if applicable)
N/A
What I Loved:
Marco Impossible is my second Moskowitz novel, and it could hardly be more disparate from Teeth. Sure, both have male first person POVs (interestingly, both are told from the perspective of the character you wouldn't expect to be the main character) and LGBT themes, but the mood and writing of the two pieces are so different. Marco Impossible is often frustrating, but ultimately so satisfying, sure to leave you with a smile on your face.

Why the book is titled Marco Impossible becomes apparent really quickly. Marco's a force to be reckoned with, and he'll steamroll anyone who gets in his way. He's tiny, he's loud, he's proud, and he's completely determined to declare his love to Benji, the hot British bass player he's been crushing on, before he transfers schools. In true Marco fashion, he can't tell Benji via a letter or in person at school; no, he has to make a dramatic gesture. Thus begins a complicated series of events as Marco and his best friend, Stephen, plan to break into the Prom, where Benji's band is playing, so Marco can confess.

Actually,though, the story is less about Marco's relationship with Benji than his relationship with Stephen. Benji and Stephen have been best friends for ages, partners in solving crime. Even their families are close, which is why Marco's staying with Stephen's huge family while his parents are in Japan adopting a baby girl. Lately, or maybe not just recently, Stephen's been feeling frustrated with their friendship, with being the sidekick, with being the straight man (both literally and figuratively) on the Marco Show.

Stephen supports Marco with everything and will even take hits for him (since not everyone's cool about Marco's being gay), but a lot of the time he can't really remember anymore why they're best friends. He hates that Marco never listens to him or takes his advice. For example, Marco is being a total brat about his new sister, because he likes being an only child. Stephen, who has five siblings of his own, keeps trying to convince Marco that he'll love his little sister, but Marco continues to whine endlessly.

What really has Stephen upset, though, is that Marco is leaving him behind. How can Marco go to some fancy prep school and leave Stephen alone? Stephen doesn't even know why he's going. It's one thing being just a sidekick, but now he feels like he's being abandoned by the hero. Throughout Marco Impossible, Stephen becomes more and more fed up with Marco, and the way Marco never wants the spotlight on anyone but himself and ignores Stephen's input and feelings. I was really surprised by how painful most of this book was to read, because I've had a lot of problems with friends in the past, and this just got me in the feels.

What Left Me Wanting More:
No worries, though, because the story does end in a happy place, which, normally, I might complain about, but it was just right for this middle grade story. Marco and Stephen needed to have a happy ending, or at least a happy closing to their heist. That said, I would have appreciated a little bit more closure on some of the familial plot lines, most especially Marco's issues with his family's changes.

The Final Verdict:
Hannah Moskowitz tends to write darker novels, but she does an excellent job with this touching middle grade story. Marco Impossible is full of heart, focused on the difficulties of loving someone, even your very best friend.