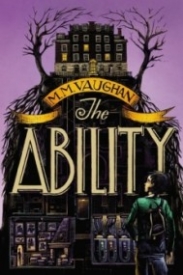 Delve into the extraordinary abilities of the twelve-year-old mind in this thrilling start to a middle-grade series that expands the possibilities of power. No one has any confidence in twelve-year-old Christopher Lane. His teachers discount him as a liar and a thief, and his mom doesn’t have the energy to deal with him. But a mysterious visit from the Ministry of Education indicates that Chris might have some potential after all: He is invited to attend the prestigious Myers Holt Academy. When Christopher begins at his new school, he is astounded at what he can do. It seems that age twelve is a special time for the human brain, which is capable of remarkable feats—as also evidenced by Chris’s peers Ernest and Mortimer Genver, who, at the direction of their vengeful and manipulative mother, are testing the boundaries of the human mind. But all this experimentation has consequences, and Chris soon finds himself forced to face them—or his new life will be over before it can begin.

A Fun Start to a New Middle Grade Series!
April 20, 2013
Overall rating
4.0
Plot/Characters/Writing Style
4.0
Illustrations/Photos (if applicable)
N/A
What I Loved:
The main hero of The Ability is young Christopher Lane, just turning twelve years old and at wit's end for how to take care of himself and his mother, ruined by the death of his father. Like so many scrappy heroes, everything falls to Chris. He struggles in school, marked as a troublemaker and is finally expelled for a weird incident where he somehow beats up a bully without touching him. But, thankfully, salvation comes in the form of a test to study at an elite, strange prep school, Myers Holt Academy, which Chris passes with flying colors. After his test, the proctor presents him with a surprise birthday cake.

Now, there are certainly a few shades of Harry Potter obviously, like the cake, but The Ability does not read like a retelling. What's most similar is actually the tone, more than the story itself. Harry Potter begins as a fairly light story for children, but then becomes progressively darker as the children age. The Ability is not a kid's book and I would recommend it for the upper end of the middle grade age group. There's some death and injury, and some ethical lines that get crossed. I really liked how dark this was, and that there are shades of gray to the characters. The bad guys aren't just evil; they have backgrounds that explain how they became the way they are. Similarly, the children and their teachers are flawed and imperfect.

There's a lot of humor in The Ability too. Most of the funny moments center around Rex, definitely the least likable of the six kids in this class at Myers Holt Academy. However, just like the other five students, the readers can't help but be glad that Rex is there, because he's so funny, both accidentally and on purpose, even if many of his jokes are rather mean-spirited. There are also some more standard middle grade jokes, like food fights and that sort of thing. The funniest moment for me, though, was this scene where Chris is sent to a fancy department store to buy some new clothes and the salesman is all snooty telling him to get his grubby hands out of his department, until a manager comes and tells him who Chris is.

Anyway, the powers that the kids have are also really cool. See, Myers Holt Academy, as one expects, is totally not a normal school. In fact, they train kids to work for the government in the super secret branch MI18. In this world, twelve-year-olds have unique abilities, where they can use a larger portion of their brains. What's really cool and unique is that these powers only manifest for a single year, though any information learned during this period will be retained for life. Basically, these kids are selected because they have more potential, but all kids age 12 have increased capacity. At Myers Holt Academy, they learn telekinesis, distance viewing, and mind reading/control. This is both cool and terrifying because I would not want children to have that much power, which is also why Sir Bentley, the head of the school, gives them lectures about using their power responsibly all the time.

Speaking of how terrifying kids with powers are, the kids they are fighting are so creepy. They're these twins who will stop at nothing to please their crazy step-mother. Yet, as evil as they are, you sort of get how they got that way and it's just sad all around, but they do need to be stopped. Vaughan does a great job setting up the bad guys and not making them laughable like so many middle grade villains are, because they don't run around spouting monologues about their evil plans.

What Left Me Wanting More:
The only drawback to The Ability is that the opening chapters are a bit confusing, because you're immediately introduced to a whole bunch of characters, and it takes a while to sort out who's who and how everything connects. The first chapter takes place 30 years before the rest of the book, and is important set up, and it's followed by a few chapters in which it's hard to tell which kid the narrative will primarily be following. This does get sorted out, but the beginning was a bit rough. Aside from that, though the kids themselves did have nice individual arcs, I would have liked a bit more focus on the friendships between the kids.

The Final Verdict:
The Ability is a great read for more mature middle graders. It's a great choice for those who enjoyed Trenton Lee Stewart's The Mysterious Benedict Society, as well as Harry Potter. I will be looking forward to the next installment!

Christina Franke, Staff Top 10 Reviewer 677 reviews
Report this review Comments (1) | Was this review helpful to you? 4 1

Karen Yingling, Staff Reviewer
"Sami has a happy and secure life in Damascus, Syria. His mother is a teacher, his father is a doctor,..."

That Thing About Bollywood
4.0

Karen Yingling, Staff Reviewer
"Sonali misses her grandfather, who ran a video rental store that specialized in Bollywood films, so she enjoys the family..."

Karen Yingling, Staff Reviewer
"Brian has anxiety at the best of times. He manages at school, and was on the basketball team, but he..."

Karen Yingling, Staff Reviewer
"In very spare poetry, we see how the spark of a book encourages one girl to investigate the information in..."

Karen Yingling, Staff Reviewer
"Based on the Lennon and McCartney Beatles' tune, this picture book showcases the lyrics against a background of a family..."

Karen Yingling, Staff Reviewer
"Shira is a really good singer, but she is nervous about performing in front of others. When her best friend..."