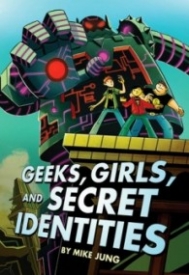 A SUPER funny, SUPER fast-paced, SUPER debut! Vincent Wu is Captain Stupendous's No. 1 Fan, but even he has to admit that Captain Stupendous has been a little off lately. During Professor Mayhem's latest attack, Captain Stupendous barely made it out alive - although he did manage to save Vincent from a giant monster robot. It's Vincent's dream come true... until he finds out Captain Stupendous's secret identity: It's Polly Winnicott-Lee, the girl Vincent happens to have a crush on. Captain Stupendous's powers were recently transferred to Polly in a fluke accident, and so while she has all of his super strength and super speed, she doesn't know how to use them, and she definitely doesn't know all the strengths and weaknesses of his many nemeses. But Vincent and his friends are just the right fan club to train up their favorite superhero before he (she?) has to face Professor Mayhem again. And if they make it through this battle for the safety of Copperplate City, Vincent might just get up the courage to ask Polly on a date.

Mike Jung GETS middle grade readers
January 26, 2013
Overall rating
4.5
Plot/Characters/Writing Style
5.0
Illustrations/Photos (if applicable)
4.0
This has everything that my students are looking for in a book! I love it when books show very clear attempts to figure out what kids WANT TO READ!!! Super heroes are a huge thing now, and this had so much more. A great romance, strong female protagonist, faithful sidekicks, compelling use for Vincent's encyclopedic geek trivia. There are even characters who are incidentally of Asian descent and appear on the cover. Bonus! If this were not enough, the writing was excellent. Even with no explanation for the existence of Captain Stupendous, I was sucked right into the book, and marvelous turns of phrase abound. Isn't Mock Apple Pie a GREAT rock band name?

Karen Yingling, Staff Reviewer Top 10 Reviewer 1212 reviews
Report this review Comments (0) | Was this review helpful to you? 0 1
Perfect Superhero Read for Middle Graders
December 27, 2012 (Updated: December 27, 2012)
Overall rating
5.0
Plot/Characters/Writing Style
5.0
Illustrations/Photos (if applicable)
5.0
What I Loved:
As a huge fan of superhero stories, I could not resist Mike Jung's debut novel, Geeks, Girls, and Secret Identities. Yet again, my instincts for middle grade novels have served me well, because Jung's novel is every bit as stupendous as its main superhero.

Packed with superhero stunts and villainous mayhem, Geeks, Girls, and Secret Identities will surely delight any and all superhero fans. The tone matches up well with the movie The Incredibles, fun, action-packed, focused on family, and with a little bit of romance on the side. For older readers, Jung throws in cute references to classics of the superhero genre. For example, I noticed a street named after Brian Michael Bendis.

Vincent Wu and his friends run their own (unofficial) fan club for the city's famed superhero Captain Stupendous. Vincent, Max and George are not remotely popular, but they have each other and can comfort themselves in the awareness of their superior knowledge of Stupendous' exploits. Their lives get changed for the more exciting when they learn the secret identity of Captain Stupendous...and he's not anyone they ever would have expected.

Vincent, Max, and George make such a convincing group of nerdy friends. They squabble, have their own sets of inside jokes, tease each other mercilessly, and, most importantly, have each others' backs when need arises. The inclusion of Polly is my favorite part, because she shows them how powerful girls can be, even though they have trouble believing that at first. Polly totally rocks, and I love the wonderful message that Jung sends about strength through her character.

Vincent's parents are largely absent during the book, divorced and both busy with their jobs, father as a genius inventor and mother as school superintendent. However, despite their lack of physical presence, there is no doubt of how much they care for their son. They call him and check on him, and do their best to protect him. Perhaps most touching is his relationship with his mother's boyfriend, Detective Carpenter. He treats Vincent with respect and honors his opinions in a way Vincent hasn't ever really felt from adults, which helps him open up in this new set of challenges.

Serious messages aside, this book is almost entirely hilarious. There's the awkwardness of first crushes, the superhero/villain banter, and plenty of gross scenes, including one rather spectacular one involving a lot of vomit. Young readers will no doubt love all of these things. To top it all off, there's a scary robot and a bunch of epic battles. What more could you ask for?

The supervillain plot follows well-tread lines, and will not be shocking to older readers. Really, though, the focus is not on the supervillain, so much on heroism and how size doesn't really matter when it comes to defeating the bad guy. Though a bit anticlimactic, the showdown with the villain is hilarious and fitting. Just know that this isn't one of those stories that ends with the defeat of the villain.

What Left Me Wanting More:
Nothing. I think this is a perfect book for the target audience.

The Final Verdict:
I highly recommend Geeks, Girls, and Secret Identities for anyone who enjoys superhero tales, young and old alike. The book reads quickly, and comes with a bunch of perfectly-matched illustrations by Mike Maihack.