A Mutiny in Time (Infinity Ring #1) 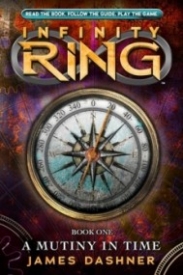 When best friends Dak Smyth and Sera Froste stumble upon the secret of time travel -- a hand-held device known as the Infinity Ring -- they're swept up in a centuries-long secret war for the fate of mankind. Recruited by the Hystorians, a secret society that dates back to Aristotle, the kids learn that history has gone disastrously off course. Now it's up to Dak, Sera, and teenage Hystorian-in-training Riq to travel back in time to fix the Great Breaks . . . and to save Dak's missing parents while they're at it. First stop: Spain, 1492, where a sailor named Christopher Columbus is about to be thrown overboard in a deadly mutiny!

Overall rating
3.3
Plot/Characters/Writing Style
3.3  (3)
Illustrations/Photos (if applicable)
N/A  (0)
Back to (Save) the Future
October 20, 2012
Overall rating
3.0
Plot/Characters/Writing Style
3.0
Illustrations/Photos (if applicable)
N/A
“History is broken, and we need your help to fix it.” With this appeal, Dak Smyth and Sera Froste are sent on a time travelling adventure to save the world from an evil organization that has changed history, while searching for Dak’s parents who are lost in time. A MUTINY IN TIME is the first in the planned seven-book Infinity Ring series. Think 39 CLUES with a historical slant and sarcastic humor thrown in.

It’s fitting for the first time travelling adventure to send the heroes to Spain in order to assist Christopher Columbus prepare for his voyage. This is history that all kids learn early on in school, and while A MUTINY IN TIME is full of historical facts, it never feels heavy handed. Even better, there is enough action to balance out the story for readers who aren’t history buffs.

I had to let go of my tendency to eyeroll (of course one of these best friends is an expert on history, while the other is brilliant enough at science that she could finish a time travel device that adults with PhDs could not) and just enjoy the story for what it is. My students won’t have the same hang-ups and will instantly be plunged into the adventures of Dak and Sera, eagerly anticipating the next book in the series.

Megan Kelly Top 50 Reviewer 112 reviews
Report this review Comments (0) | Was this review helpful to you? 1 0
Making time travel popular.
September 26, 2012
Overall rating
3.0
Plot/Characters/Writing Style
3.0
Illustrations/Photos (if applicable)
N/A
In the near future, best friends and geeks Dak and Sera mess around in Dak's parent's labs and manage to get the Infinity Ring, the time travel device his parents have been working on for twenty years, to be operational. They think that the parents will be pleased, but they are terrified that having te device working will put them all in danger. After traveling back to the Revolutionary War with his parents, Dak and Sera get separated from them and discover that there is a group of Hystorians who need the device to travel back and fix Breaks in time, historical events that go wrong and cause natural disasters and Remnants (something akin to really bad dreams)in the present day. The Hystorians were founded by the philosopher Aristotle who felt that Alexander the Great should not have been killed as a child. Brint and Mari introduce the two to Riq, who is adept at languages, and decide to send the three back to the time of Christopher Columbus to make sure that he explores the New World rather than the Amancio brothers who discovered America. Or is there job to make sure the Amancio brothers are the ones to sail? Aided by Time Wardens and a series of clues, the three need to make the appropriate change to history and make is back to the Hystorians for their next assignment. Extensive online activities accompany this, and the seven book series by different authors will be released from August 2012 until March 2014.
Good Points
Decent time travel explanations and device, good team of characters. This is Scholastic's next attempt at a Thirty Nine Clues phenomenon, and perhaps it will interest a new group of readers in time travel books. I love time travel books, and if this series gets kids reading about time travel, that would be great.

Karen Yingling, Staff Reviewer Top 10 Reviewer 1147 reviews
Report this review Comments (0) | Was this review helpful to you? 1 0
Quantum Leaping
August 28, 2012 (Updated: August 28, 2012)
Overall rating
4.0
Plot/Characters/Writing Style
4.0
Illustrations/Photos (if applicable)
N/A
A few years ago, when I first noticed the 39 Clues series, I was very dismissive. "Boy band books," I called them, because they were sort of reverse-engineered. What I mean is that first, a group of editors came up with an idea for a series, and then asked writers if they would actually write the books, much like when a group of music executives decided to put together a band, found five cute singers and came up with the Backstreet Boys. Or N'Sync. Or the Spice Girls. Or whatever. I was suspicious of what I feared was the triumph of marketing over art.

My son insisted I would like them, though. "Just try," he said, waving the first one in my face. I finally gave in, and you know what? I did like it. I liked it so much, I read the next one. I read them ALL. I liked the characters and their kooky adventures and all their crazy relatives. Of course, I also liked the Spice Girls, which, in retrospect, should have been a clue. Just because a group (or a book) didn't emerge organically, doesn't mean it won't be any good. It might be just fine, fun even.

A MUTINY IN TIME, by James Dashner, is the first volume in Infinity Ring, Scholastic's new boy band, I mean series. (Or "multi-platform project," as the publisher describes it. There's a website and stuff.) And you know what? It was pretty good. Of course, it comes from the (metaphorical) pen of James Dashner, who can spin an awesome tale, and he does a solid job starting this series off. The pacing is strong, the plotting tight, and the semi-subtly buried history lessons are sufficiently in stealth mode.

There are some rather convenient constructions, however. How handy is it that the two protagonists are Sera, a scientific genius, and Dak, a history nut? Equally handy, they join forces with a somewhat older linguistic prodigy (Riq) who speaks sixteen languages. Ooh, also he has access to a device that allows you to understand and speak any language. Handy!

I know, I know. Really, the issues raised by time-travel are so mind-bendingly complicated that you sort of need mechanical Babel Fish (cf. Hitchhiker's Guide to the Galaxy), DNA coded quantum manipulators, and a girl who understands graviton particles. Or are those from Star Trek? Anyway, you know what I mean. Every time-travel story has to cope with the whole don't-kill-your-grandfather paradox, and the ways in which this story deals with those issues are reasonably satisfying. That's saying a lot. Or maybe I'm saying a lot. Perhaps I should stop.

I can try boiling it down. A MUTINY IN TIME is a good book, but not a great book. I had a hard time really caring about the characters, and my confidence that of COURSE they'll fix history is just a little too strong. That's the main plot arc, by the way, that history is broken, the fabric of reality is tearing under the stress, and Dak and Sera are the only ones who can fix it.

As a lover of all things timey wimey, though, I'm happy to go along for the ride. I did love the Quantum Leap-esque ending, where the three kids finish their mission, warp through time and land in the middle of another complicated, dangerous situation. I could just hear Sam saying, "Oh boy." I'll say it too. "Oh, boy. I can't believe I have to wait to find out what happens next."

Francesca Amendolia Top 100 Reviewer 66 reviews
Report this review Comments (0) | Was this review helpful to you? 0 0

Jazmen Greene, Newsletter Manager
"I often hear it said that writers are bred, and sure you can breed some decent writers with whatever amount..."

On These Magic Shores
5.0

Karen Yingling, Staff Reviewer
"Juliette's father is a baker in Belgium in 1944, and has been threatened by the occupying Nazis into giving them..."

Karen Yingling, Staff Reviewer
"In The Unlikely Story of a Pig in the City, Josie and her large family adopted Hamlet, a pig. When..."

Karen Yingling, Staff Reviewer
"Change is coming to Kidahara, a magical forest in the Joson, a kingdom in a diverse realm where there is..."

Karen Yingling, Staff Reviewer
"Mac lives with her parents, Hank and Coral, in a small house in Portland. Small, as in she sleeps in..."

Daring Darleen, Queen of the Screen
4.0

Karen Yingling, Staff Reviewer
"Darleen comes from a long line of entertainers; her father and his siblings are all part of Matchless Studios, a..."

Karen Yingling, Staff Reviewer
"Michael Prasad and his family live on a colony on Mars, under a dome that controls the environment. His father,..."