The Prince Who Fell from the Sky 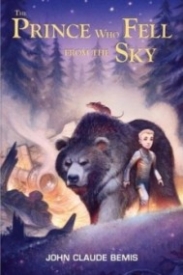 In Casseomae's world, the wolves rule the Forest, and the Forest is everywhere. The animals tell stories of the Skinless Ones, whose cities and roads once covered the earth, but the Skinless disappeared long ago. Casseomae is content to live alone, apart from the other bears in her tribe, until one of the ancients' sky vehicles crashes to the ground, and from it emerges a Skinless One, a child. Rather than turn him over to the wolves, Casseomae chooses to protect this human cub, to find someplace safe for him to live. But where among the animals will a human child be safe? And is Casseomae threatening the safety of the Forest and all its tribes by protecting him? Middle-grade fans of postapocalyptic fiction are in for a treat with this fanciful and engaging animal story by the author of the Clockwork Dark trilogy.

Protecting the Skinless Cub
May 22, 2012 (Updated: May 22, 2012)
Overall rating
5.0
Plot/Characters/Writing Style
5.0
Illustrations/Photos (if applicable)
N/A
THE PRINCE WHO FELL FROM THE SKY, by John Claude Bemis, is an interesting spin on a future dystopia, although in this case, the “dys-” (a root meaning "bad" or "difficult") is somewhat misleading. This is not a corrupted human world, not a Hunger Games tyranny or an Uglies totalitarian state. This is not 1984. In fact, it’s no longer a human world at all.

The basic premise of THE PRINCE WHO FELL FROM THE SKY is this: what if human society had all but destroyed itself, and nature had reclaimed the world? That story, at least from the perspective of the animals, wouldn’t be all that bad. Certainly, nature is red in tooth and claw, as the saying goes, but the animals have settled into their own territories, their own hierarchies. They live among the wreckage left by the Skinless (as they refer to humans), a world destroyed so long ago that for most animals the Old Devils (another name for humans) have achieved the status of myth or bogeymen. The Old Devils were hideous, terrible enemies, but they are gone, never to return.

Then a human plane crashes, and the only survivor is a small Skinless boy . A lonely bear named Casseomae finds him, and quickly becomes fiercely protective of the "cub." She chooses to defy all advice and commands, and sets off to find a way to keep the boy safe, with the help of Dumpster the rat, and later on a dog named Pang.

As seems fit for a story set in this new world, where animals have taken over the space once dominated by humans, the narrator and main characters are animals. We never get a glimpse into the boy-child’s mind, never hear what human words he might be saying. While I firmly believe this was the right choice for such a story, I found it somewhat disorienting at times. I cared who this boy was and what would happen to him, as a member of his species. I longed to know more about the human story, but was clearly (and frustratingly, even if also appropriately) locked into the animals' perspectives.

Yet I also cared about the people whose characters, histories and hopes were far more clearly expressed: Casseomae, Pang, Dumpster and others. I suppose that in itself (that I perceived the animals as people, rather than sidekicks) is part of the point. This is where we have to question the "dys-" in dystopia. Sure, this world is hostile to humans. Clearly, human civilization has collapsed, perhaps irredeemably. So for a human character, this might be a dystopia. However, for animals the world has improved. They have far more land, run far fewer risks of being shot or killed or hunted to extinction. They no longer have to fight with humans for limited resources. For nature, this is not a bad turn of events. This is a happy ending.

Speaking of endings, the fact that the boy has, by the end of the book, learned to speak a few words of Vora (one of the animals’ common languages) – as well as the fact that the meaning of “the prince” in the title never felt fully explained – to me suggests a sequel. If humans are beginning to reassert their place on the planet, this boy will be the bridge between animal society and human society, the hope for a peaceful sharing of space and resources. That’s a story I’d like to read.
Good Points
Interesting spin on dystopic stories
Pleasingly twisty plot

Francesca Amendolia Top 100 Reviewer 66 reviews
Report this review Comments (0) | Was this review helpful to you? 0 0

Overall rating
3.0
Plot/Characters/Writing Style
3.0  (1)
Illustrations/Photos (if applicable)
N/A  (0)
Already have an account? Log in now or Create an account
Sort of Like if Ice Age Were a Futuristic Dystopian
May 25, 2012
Overall rating
3.0
Plot/Characters/Writing Style
3.0
Illustrations/Photos (if applicable)
N/A
As you may know by now, I don't generally read book blurbs before starting books. I saw the tag dystopia and requested this immediately without knowing pretty much anything. Despite the bear on the cover, I was still really confused when I started reading and it was a bunch of bears talking to one another. Very strange.

In a dystopian world where humans are thought to have died out, the animals have gone all Animal Farm. Wolves are the rulers of this landscape, controlling boundaries and determining which predators are allowed to stay in their territory. The wolves' control stems from their strength, the fact that they're pack-based (there's a lot of them) and that they helped kill off the last humans, decimated by an infection and who knows what else. All the wild animals have serious contempt for Faithfuls, basically pets.

The bears have an uneasy truce with the reigning wolf pack in the area. Casseomae, an old female bear, is chatting with a rat, Dumpster, one day, having just saved him from some hungry coyotes, when something crashes to the ground nearby. Inside the thing are some of the Skinless (aka "Old Devils" or humans). The crash has killed all but one, a Skinless cub. Casseomae's mothering instincts kick in and she determines to save this creature, which every other animal in the forest wants to kill, except for Dumpster and later a dog named Pang. This odd team works together to save the child.

I never really got over the sense of strangeness as I read this. In no way is it bad, and I think the concept is fascinating, but it never really worked for me. Partly, I think that this is largely because it doesn't seem to be targeted at a particular age group. It's being marketed as middle grade, but I question that somewhat. The fact that the main characters are animals, and the child's age, which is indeterminate but seems young, would recommend the book to children. However, the violence of the story (especially since it's animals being hurt) would lead me to think it would be best for older readers, who might not be so interested in an animal tale.

The Prince Who Fell from the Sky is rather reminiscent of Ice Age, although humans are the ones dying out in that one. Even the main character grouping is fairly similar to Ice Age: child, bear (to replace mammoth - able to carry others and fight), rat (similar to the sloth in usefulness physically, but Dumpster is also a compendium of knowledge), and dog (not as useful as the sabretooth I'll admit). It's kind of like a dystopian mashup of Ice Age and The Incredibly Journey. So if that sounds appealing to you, definitely check this out.

Christina Franke, Staff Top 10 Reviewer 677 reviews
Report this review Comments (0) | Was this review helpful to you? 0 0
Powered by JReviews
How to resolve AdBlock issue?
X