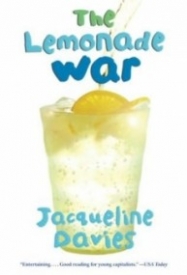 As the final days of summer heat up, so does a sibling showdown over a high-stakes lemonade stand business. Jessie and Evan Treski compete to see who will make $100 first off of their respective lemonade stands. Full of surprisingly accessible and savvy marketing tips for running a stand (or making money at any business) and with clever mathematical visuals woven in, this sensitively characterized novel subtly explores how war can escalate beyond anyone's intent.
Tweet

Evan should be enjoying the last few scorching days of summer, but he just can’t get over the news that his brainiac younger sister Jessie is not only skipping third grade, but she’s going to be in his actual class. Now everyone will know his sister is smarter than he is. WAY smarter. So that’s it. He’s done. He’s not going to hang out with Jessie, not going to talk to Jessie, and he definitely won’t run a lemonade stand with Jessie, just to give her the chance to show off how good she is at math.

Jessie, on the other hand, is over the moon that she’ll be in the same class as Evan. She and Evan have always been really good friends, as well as brother and sister. She can’t understand why he’s suddenly being so mean to her, or why he’s refusing to have a lemonade stand with her. It’s a puzzle, Jessie knows, and she should be good at puzzles. “But it was a puzzle about feelings, and Jessie knew that feelings were her weakest subject.”

The conflict between them grows until it erupts into a lemonade-selling competition -- whoever earns $100 first wins, AND keeps both their earnings. Evan is determined to win no matter what, even if it might mean cheating, except that even he wouldn’t actually stoop to stealing his sister’s money. So who did then?

The Lemonade War is an utterly satisfying book. The characters are genuine, the mixed tension and love between brother and sister very real. The chapters alternative between Jessie’s perspective and Evan’s, so very quickly the reader ends up rooting for both kids, which makes the competition between them even more tense, because even the reader isn’t sure who should win. The theft of Jessie’s money brings a whole other dimension into the story – we as readers know who did it, but the characters can’t be sure. So while we’re not left in the dark about the thief’s identity, he isn’t brought to justice.

At least, not in this book. Luckily, a sequel (The Lemonade Crime) just came out, and you can read my review of it right here on Young Adult Books Central.

As a grown-up reader of this wonderful book – and as the mother of a child with Asperger’s Syndrome (AS), a form of high-functioning autism – I have another reason to love it. Jessie probably has AS, or something very similar. Her difficulty with social interactions, her confusion about feelings, her need for directness, her love of numbers and mathematics, her need to get things right – these are all characteristics of an Aspie child. This is never stated right out, and nor does it need to be. In fact, that’s what is so wonderful about how Jacqueline Davis has constructed her story. This is not an ‘issue’ book. It is not about AS. There’s no agenda, no soapbox. There is simply a character who clearly thinks differently, experiences the world differently, and as readers, we’re given the chance to see the world through her eyes, gently, without pushing. Another reader might never think “autism” when reading about Jessie, and that would not affect his enjoyment of the story at all.

Yet her difference matters. It’s not incidental to the story, but informs everything from her skipping a grade to her affection for her straight-talking brother to her anxiety about interacting with other girls. Really, it’s brilliantly done, to write so clearly about a child with autism and to make it so central to the story, and yet to keep the story from being in any way ABOUT autism.

This is the sort of book I want my son to read, even more so than The Curious Incident. This is the sort of book that says yes, there are kids out there who think differently and you know what? They’re also just kids, with stories of their own. Jessie is not A Kid With AS. She’s a kid, who also has AS. Her story is greater than her neurological difference, so much so that (again) a reader doesn’t have to know or care a bit about autism to care about her, to care about this story and to read it with interest and delight.

Francesca Amendolia Top 100 Reviewer 66 reviews
Report this review Comments (0) | Was this review helpful to you? 12 0