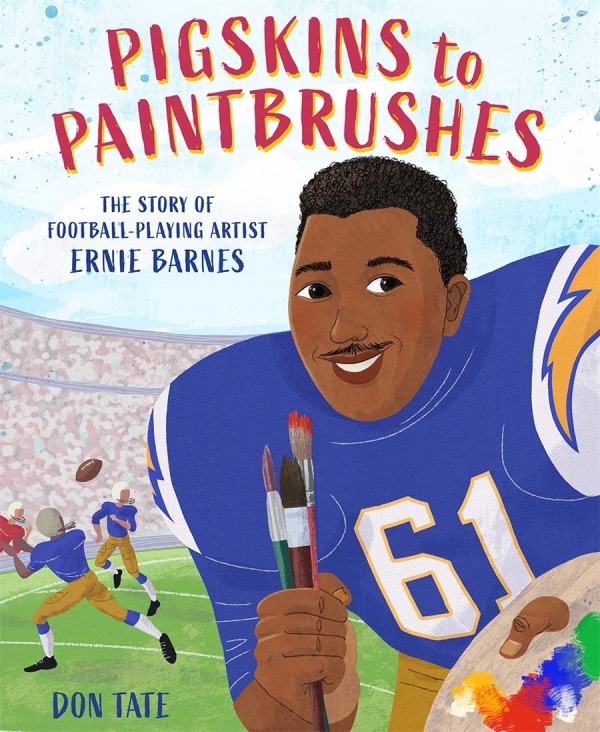 Young Ernie Barnes wasn’t like other boys his age. Bullied for being shy, overweight, and uninterested in sports like boys were “supposed” to be, he instead took refuge in his sketchbook, in vibrant colors, bold brushstrokes, and flowing lines. But growing up in a poor, Black neighborhood during the 1930s, opportunities to learn about art were rare, and art museums were off-limits because of segregation laws. Discouraged and tired of being teased, Ernie joined the school football team. Although reluctant at first, he would soon become a star.

But art remained in Ernie’s heart and followed him through high school, college, and into the NFL. Ernie saw art all around him: in the dynamic energy of the game, the precision of plays, and the nimble movement of his teammates. He poured his passion into his game and his craft, and became famous as both a professional athlete and as an artist whose paintings reflected his love of the sport and celebrated Black bodies as graceful and beautiful.

He played for the Baltimore Colts (1959–60), Titans of New York (1960), San Diego Chargers (1960–62), and the Denver Broncos (1963–64). In 1965, Barnes signed with the Saskatchewan Roughriders in Canada, but fractured his right foot, which ended his professional football career. Soon after, he met New York Jets owner Sonny Werblin, who was impressed by Barnes and his art. In 1966, Barnes had a debut solo exhibition in New York City, sponsored by Werblin at the Grand Central Art Galleries; all the paintings were sold. Barnes became so well-known as an artist that one of his paintings was featured in the opening credits of the TV show Good Times, and he was commissioned to create official posters for the Los Angeles 1984 Summer Olympics.

From award-winning author and illustrator Don Tate, Pigskins to Paintbrushes is the inspiring story of Ernie Barnes, who defined himself on his own terms and pushed the boundaries of “possible,” from the field to the canvas.

The back matter includes Barnes’s photograph and his official Topps trading card. Also included are an author’s note, endnotes, a bibliography, and a list of websites where Barnes’s work can be seen.

Interesting combination of art and sport
In this picture book biography, we learn of Ernie Barnes, who was born in 1938 and raised in North Carolina. He was fond of drawing and painting, and preferred these inside pursuits to the rough and tumble of sports. When he got a bit older, he tired of being picked on for being somewhat overweight, and tried out for the football team. A teacher suggested that he start body building, which helped him to become a better football player. Although he continued with his artistic pursuits, he was offered a number of college scholarships for football, so traveled down that road for quite some time. After playing in college, he was recruited for the Colts, but cut at the end of the training period. He ended up playing five seasons in the NFL with the New York Titans, San Diego Chargers, and Denver Broncos. When he retired because of an injury, he approached a team about becoming their full time artist, and began to find acclaim from his work. His paintings appeared on the television show Good Times, and he made several guest appearances on the show as well. He passed away in 2009 after a long career in art.
Good Points
Tate has a good note in the back that his own art work is not meant to represent the style of Barnes, and the bright colors and clean lines tell Barnes’ story with a lot of interest. There is a lot of texture in the illustrations, and the treatment of fabric is especially nice.

This is well researched, and there are footnotes at the end, as well as a timeline and brief bibliography. Tate, who is also Black, discusses in an end note how inspirational he found Barnes’ work once he discovered him.

Barnes’ unique mix of football an art has been covered in Between the Lines: How Ernie Barnes Went from the Football Field to the Art Gallery by Sandra Neil Wallace and Bryan Collier, but this is a different enough book to warrant attention. Hand this to fans of Tavares’s Growing Up Pedro, Reid and Freeman’s Althea Gibson: The Story of Tennis’ Fleet of Foot Girl and Kelly’s Miracle Mud: Lena Blackburne and the Secret Mud that Changed Baseball.