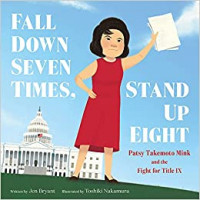 From a young age, Patsy Takemoto Mink learned that striving for goals came with challenges. But she also learned to never give up. As the Japanese proverb says: fall down seven times, stand up eight.

That spirit helped Patsy through school. She wanted to become a doctor, but at the time, medical schools didn’t admit women. So Patsy carved her own path. She went to law school, ran for a seat in the United States Congress, and helped create Title IX, the law that requires federally funded schools to treat boys and girls equally. Although many people tried to knock her down, Patsy—a historic trailblazer who spent her life fighting for fairness—always got up again!

Patsy Takemoto lived on the island of Maui with her family, including grandparents, who has immigrated from Japan, and her father, who had gone to university and was an engineer. One of the traditions they maintained was the painting of daruma dolls, wherein one eye was painted when a goal was announced, and the other painted when the goal was accomplished. The dolls also had a Weeble-like base, so they could be pushed over but would right themselves, embodying the phrase “Fall down seven times, stand up eight” of the title. During the Great Depression, when Patsy was in elementary school, Hawaii was working toward statehood, but the bombing of Pearl Harbor changed things. Patsy’s father was arrested, but luckily returned unharmed. After the war, Patsy attended college in Nebraska, where she was treated as foreign even though she was not an international student. She fought to end segregation at college, and fought to get into medical school at a time when many did not admit female students. She was finally admitted to law school at the University of Chicago. Her legal career included serving in the Hawaiian legislature and the US congress, and fighting for Title IX, a critical piece of legislation ensuring equal educational opportunities for women.

Good Points
There is a lot of women’s history that young girls don’t know; my students are shocked to learn that my mother was expected to quite teaching when she was pregnant with me, or that girls couldn’t wear slacks to our school until 1970. Seeing Takemoto Mink’s experiences in fighting for her own education against the back drop of the tumultous twentieth century is a good reminder that things were not always they way they are now, and that we shouldn’t take women’s rights for granted.

The refain “Fall down seven times, stand up eight” is used to excellent effect again and again, as obstacles are placed in the way of everything Takemoto Mink tried to accomplish. It’s an excellent and timely lesson in perserverance. There is just enough information in the book to give a good overview of Takemoto Mink’s life, but the book is short enough that it would make an excellent read aloud for a classroom.

The artwork by Toshiki Nakamura is very charming. The characters reminded me a bit of the Rankin-Bass animation of my childhood, so seemed generally happy and upbeat, despite the obstancles depicted. The backgrounds of the page spreads have a lot of detail and also lend an excellent feeling of place to the narrative.

There is a timeline at the end of the book, and an excellent selected bibliography that includes Blumenthal’s important Let Me Play: The Story of Title IX , the Law That Changed the Future of Girls in America, which I highly recommend to any student of women’s history. There are a growing number of biographies about women in politics, and Takemoto Mink’s story is an excellent one to shelve alongside Boxer’s A Seat at the Table: The Nancy Pelosi Story, Ignotofsky’s Women in Sports: 50 Fearless Athletes Who Played to Win, Bolden’s Speak Up, Speak Out: The Extraordinary Life of Fighting Shirley Chisholm, and Mwai’s Stacey Abrams.

You are here: Kid Review: Fall Down Seven Times, Stand Up Eight: Patsy Takemoto Mink and the Fight for Title IX by Jen Bryant