Hey, YABCers! Ready for the first cover reveal of 2015?

Today we’re super excited to celebrate the cover reveal for TRUST ME, I’M TROUBLE by Mary Elizabeth Summer, releasing October 13, 2015 from Delacorte Press. Before we get to the cover, here’s a note from Mary Elizabeth:

Greetings again, YABC readers!!
It is my profound pleasure to be offering you a second cover reveal (and giveaway!), this time for the sequel in the Trust Me series, TRUST ME, I’M TROUBLE. This cover is pretty different from the cover I revealed last January, because the first book in the series (TRUST ME, I’M LYING) underwent a complete cover redesign just prior to release.
But I love the new cover scheme for the series as much as I did the original. For one thing, the darker tones more accurately depict the noir nature of the story. Plus, the font is perfect for Julep—utterly lacking in frills and a little distressed around the edges. For those who have read the first book, I’m sure you’ll agree that the cover fits the story like a fingerprint-preventing glove.
In any case, I’m proud and excited to show off the cover for book two! It’s even more chilling than the last one. And if you look really close, the cover hints at the big con at the heart of the book…
You, me, and 63,
~ Mary Elizabeth Summer (TRUST ME, I’M TROUBLE, Delacorte Press) 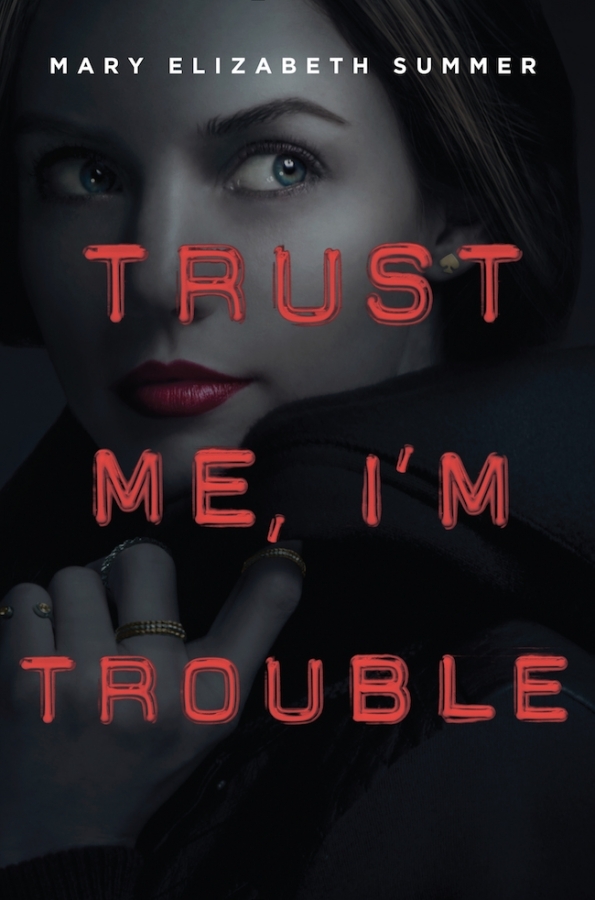 *** If you choose to share this image elsewhere, please include a courtesy link back to this page so others can enter Mary Elizabeth’s giveaway. Thank you! ***

by Mary Elizabeth Summer
Release date: October 13, 2015
Publisher: Delacorte Press
ISBN-13: 978-0-385-74414-0
About the Book
Staying out of trouble isn’t possible for Julep Dupree. She has managed not to get kicked out of her private school, even though everyone knows she’s responsible for taking a down a human trafficking mob boss—and getting one of their own killed in the process. Running cons holds her guilty conscience at bay, but unfortunately, someone wants Julep to pay for her mistakes…with her life.
Against her better judgment, Julep takes a shady case that requires her to infiltrate a secretive organization, one that may be connected to her long-gone mother and the enigmatic blue fairy. Her best friend, Sam, isn’t around to stop her, and Dani, her one true confidante, happens to be a nineteen-year-old mob enforcer whose moral compass is as questionable as Julep’s. But there’s not much time to worry about right and wrong—or to save your falling heart—when there’s a contract on your head.
Murders, heists, secrets and lies, hit men and hidden identities…if Julep doesn’t watch her back, it’s her funeral. No lie.

Mary Elizabeth Summer contributes to the delinquency of minors by writing books about unruly teenagers with criminal tendencies. She has a BA in creative writing from Wells College, and her philosophy on life is “you can never go wrong with sriracha sauce.” She lives in Portland Oregon with her wife, their daughter, and their evil overlor—er, cat. TRUST ME, I’M LYING, her debut novel, is available now. The sequel, TRUST ME, I’M TROUBLE is coming out October 2015.