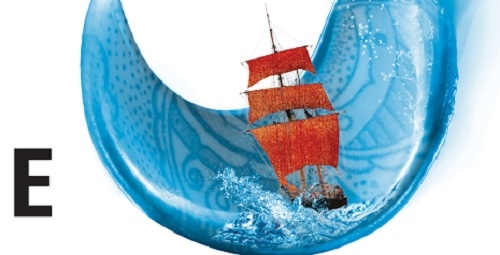 Today we’re super excited to celebrate the cover reveal for THE SHIP BEYOND TIME by Heidi Heilig, releasing March 28, 2017 from Greenwillow Books. Before we get to the cover, here’s a note from Heidi:

Ahoy and aloha, YABC! All aboard the cover reveal for THE SHIP BEYOND TIME.

It was just about a year ago that I was here last, sharing the cover for my debut, The Girl From Everywhere. But time flies–as any time traveler knows–and today I am so super psyched to share the cover for the sequel! Fun Fact–a version of this design was actually in the first batch proposed for the cover of book one. It was one of my absolute favorites, so I’m really happy to see it grace the cover of THE SHIP BEYOND TIME. Best of all, book one and two will look stunning side by side on my shelf! *** If you choose to share this image elsewhere, please include a courtesy link back to this page so others can enter Heidi‘s giveaway. Thank you! ***

THE SHIP BEYOND TIME

Nix has spent her whole life journeying to places both real and imagined aboard her time-traveling father’s ship. And now it’s finally time for her to take the helm. Her father has given up his obsession to save her mother—and possibly erase Nix’s existence—and Nix’s future lies bright before her. Until she learns that she is destined to lose the one she loves. But her relationship with Kash—best friend, thief, charmer extraordinaire—is only just beginning. How can she bear to lose him? How can she bear to become as adrift and alone as her father?

Desperate to change her fate, Nix takes her crew to a mythical utopia to meet another Navigator who promises to teach her how to manipulate time. But everything in this utopia is constantly changing, and nothing is what it seems—not even her relationship with Kash. Nix must grapple with whether anyone can escape her destiny, her history, her choices. Heidi Heilig weaves fantasy, history, and romance together to tackle questions of free will, fate, and what it means to love another person. But at the center of this adventure are the extraordinary, multifaceted, and multicultural characters that leap off the page, and an intricate, recognizable world that has no bounds. The sequel—and conclusion—to the indie darling The Girl from Everywhere will be devoured by fans of Rachel Hartman and Maggie Stiefvater. Includes black-and-white maps.

Heidi grew up in Hawaii where she rode horses and raised peacocks, and then she moved to New York City and grew up even more, as one tends to do. She holds an MFA from New York University in Musical Theatre Writing, of all things, and she lives in Brooklyn with her husband, her son, and their pet snake. They do not own a cat.

You are here: It’s Live!! Cover Reveal: The Ship Beyond Time by Heidi Heilig + Giveaway (Intl)