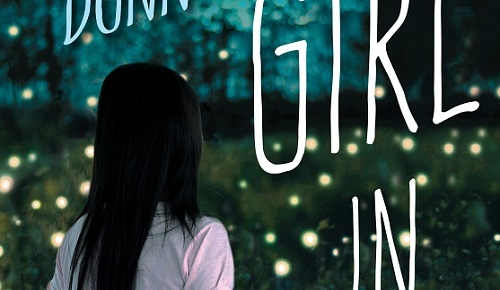 Today we’re super excited to celebrate the cover reveal for GIRL IN BETWEEN by Pintip Dunn, releasing June 27, 2017 from Kensington Books. Before we get to the cover, here’s a note from Pintip:

During my childhood, I would escape into the world of books, lots and lots of books, libraries full of books, shelf after shelf. But as much as reading was my joy and my solace, it also cemented my feelings of not belonging.

I’ve wanted to be an author ever since I was six years old, but I grew up believing that if I wanted to publish a book, I could only write about Caucasian characters. This wasn’t so much an opinion but a fact of life. Just as the sky is blue. Just as the grass is green. Just as my skin is yellow.

Fast forward thirty or so years, and something happened in the publishing industry. Something exciting and wonderful and ground-breaking, and I would be lying if I said it didn’t completely blow my mind.  Campaigns like #WeNeedDiverseBooks and #OwnVoices emerged, and I learned that I could write about characters who looked like me.

I am so excited to share with you the cover of GIRL IN BETWEEN. This YA contemporary thriller is about a Thai-American girl who is caught between cultural worlds — and what happens to her when a stalker tries to steal her identity.

I hope you love this cover as much as I do. *** If you choose to share this image elsewhere, please include a courtesy link back to this page so others can enter Pintip‘s giveaway. Thank you! ***

In her small Kansas town, at her predominantly white school, Kanchana doesn’t look like anyone else. But at home, her Thai grandmother chides her for being too westernized. Only through the clothing Kan designs in secret can she find a way to fuse both cultures into something distinctly her own.

When her mother agrees to provide a home for a teenage girl named Shelly, Kan sees a chance to prove herself useful. Making Shelly feel comfortable is easy at first—her new friend is eager to please, embraces the family’s Thai traditions, and clearly looks up to Kan. Perhaps too much. Shelly seems to want everything Kanchana has, even the blond, blue-eyed boy she has a crush on. As Kan’s growing discomfort compels her to investigate Shelly’s past, she’s shocked to find how much it intersects with her own—and just how far Shelly will go to belong… Her debut novel, FORGET TOMORROW, won Best First Book in RWA’s RITA contest. She is a member of Romance Writers of America, Washington Romance Writers, YARWA, and The Golden Network.

She lives with her husband and children in Maryland.

Three winners will each receive a copy of GIRL IN BETWEEN, when available.

Something Beautiful
Something About Grandma
Spineless
Big Game (FunJungle #3)
Lion Down (FunJungle #5)
Panda-monium (FunJungle Book 4)
Punky Aloha
When Santa Came to Stay
Busy Betty
Raising the Horseman
Hunterland
Armadas in the Mist
The Darker the Skies
Jester
The Drowned Woods
Zyla and Kai
A Duel with the Vampire Lord (Married to Magic, #3)
Meet the Moon
The Second Death of Edie and Violet Bond
The Honeys
Big stuff planes, rockets, spacecraft!
Put a Lyd On It! (Wrassle Castle #3)
Dressing Up the Stars: The Story of Movie Costume Designer Edith Head
Ask the Girl
Dinos Driving
A Synagogue Just Like Home
Bear Has a Belly (Big, Little Concepts, 5)
Biscuit and the Great Fall Day (My First I Can Read)
Listen Up! Train Song (Big, Little Concepts, 2)
The Long Ride Home

You are here: It’s Live!! Cover Reveal: Girl in Between by Pintip Dunn + Giveaway (US/Canada)