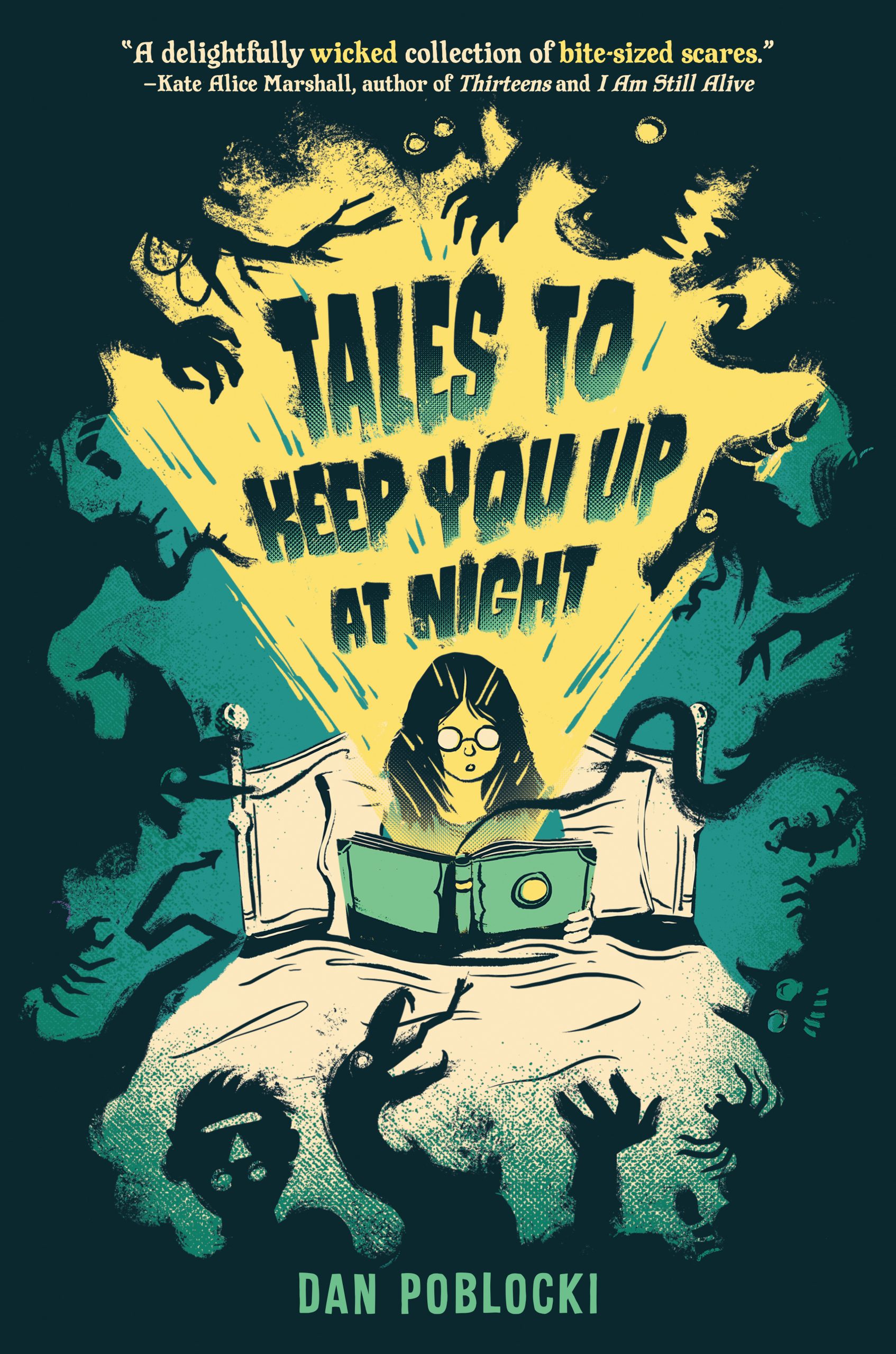 Today we are very excited to share an interview with Author Don Poblocki (Tales To Keep You Up At Night)! 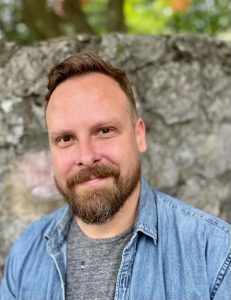 Dan Poblocki is the co-author with Neil Patrick Harris of the #1 New York Times bestselling series The Magic Misfits (writing under the pen-name Alec Azam). He’s also the author of The Stone Child, The Nightmarys, and the Mysterious Four series. His recent books, The Ghost of Graylock and The Haunting of Gabriel Ashe, were Junior Library Guild selections and made the American Library Association’s Best Fiction for Young Adults list in 2013 and 2014. Dan lives in Saugerties, New York, with two scaredy-cats and a growing collection of very creepy toys.

About the Book: Tales To Keep You Up At Night 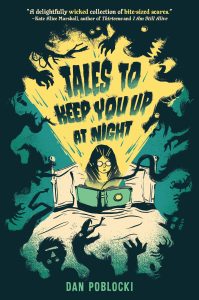 Amelia is cleaning out her grandmother’s attic when she stumbles across a book: Tales to Keep You Up at Night. But when she goes to the library to return it, she’s told that the book never belonged there. Curious, she starts to read the stories: tales of strange incidents in nearby towns, of journal entries chronicling endless, twisting pumpkin vines, birthday parties gone awry, and cursed tarot decks. And at the center of the stories lies a family of witches. And witches, she’s told, can look like anyone…

As elements from the stories begin to come to life around her, and their eerie connections become clear, Amelia begins to realize that she may be in a scary story of her own…

With hair-raising, spine-chilling prose, Dan Poblocki delivers a collection of interconnected stories that, if you’re anything like Amelia, is sure to keep you up late in the night.

I’ve always been drawn to creepy stories, ever since I was a kid. Some of my early favorites were the Scary Stories to Tell in the Dark series by Alvin Schwartz, as well as collections of folklore from around the world. When I reached middle school, I dared to pick up Stephen King’s short story collections, and I fell in love with what a his scary tales could do. Ultimately, I wanted Tales To Keep You Up At Night to be a mix of Schwartz and King, appropriate for young readers. One thing I liked about story collections as a kid was looking through the table of contents and deciding which one I’d read next. I wanted to be sure to put in a table of contents in my book, so that, even though they are all connected by Amelia’s tale, a reader could still have that experience of reading a single story, if that’s what they were in the mood for.

There are lots of characters throughout the 13 tales, but the one I keep coming back to as a favorite is Lloyd from “Green Beans.” He’s a stubborn little boy, almost obnoxiously so, but it’s this aspect of his character that helps him survive his encounter with “the man with the upside-down head.” Also, he just makes me laugh. I’m certain he’s a part of my young self I was never quite willing to admit ever existed.

The stories came first—especially “The New House” and “The Happy-Birthday Man Birthday Camp,” the title of which came to me in a dream. Once I realized that I wanted to write more and more stories, and that they’d be connected by the tale of a girl who finds a collection of scary stories, I played around with some titles, based on old horror anthologies from the mid-twentieth century, but the one I kept coming back to was Tales To Keep You Up At Night. It just felt right.

The ending of the story called “Nite Crawlers” thrills me every time I look at it. I don’t want to spoil it, so I won’t reveal what happens. I will say, however, that whenever I read the final line, I shiver and hold the book at a distance and ask myself how I could possibly have put my characters through something like that? It has to do with giant earthworms . . . Just awful. Ha!

Way back in the beginning, before I was published or paid for putting down words, writing was just plain fun for me. Over the years, with the pressure of producing, and the constant fear of failure, the act of writing sometimes feels exhausting, stressful, or just plain impossible. I think it’s important to remember how fun it can be, joyful even, and if there’s a way to let all the rest of it go, your writing will be better for it. Find the fun—that’s my advice. Even if it’s scary fun.

I adore the cover of this book! It was designed by Mary Claire Cruz and illustrated by the wonderful artist, Marie Bergeron. I think they did a great job of capturing the retro feeling I was going for with these stories, especially with the title treatment and color gradients, like something out of an old comic book. Also the smoky frame around the edges that’s filled with monsters, claws, and crawly-things that go bump in the night is straight out of my dark little imagination.

Hide and Don’t Seek: And Other Very Scary Stories by Anica Mrose Rissi. This one came out last year, and I immediately ate it up. The stories are all very different, sometimes written in different styles. As soon as you finish one, you’ll want to race on to the next. And then, at the end, start all over again. A great idea for scaring your friends at a sleep-over.

I’m putting finishing touches on my manuscript for MORE Tales To Keep You Up At Night. It’s a new collection of linked stories, with an overarching narrative that follows a new character, in an entirely different setting, and his encounter with some very scary tales that connect, fiendishly, to the first book.

Despite the fact that I scare people for a living, I also think I’m very good at calming friends and family down when they’re stressed, upset, or frightened. I’m easily stressed (and frightened), so I believe I know what I’d need to hear (or not hear) to get through what they’re going through. Separately, if I could have ANY superpower, I’ve recently realized that it would be to turn any situation into a flash mob musical number. Silly, I know, but you could easily escape where you didn’t want to be, all while being entertained. How I prefer to live my life, actually.

Title: Tales To Keep You Up At Night

Tags: Don Poblocki, Interview, Penguin Workshop, Tales To Keep You Up At Night

Wait For Me
Unsolved Case Files: The 500 Million Dollar Heist: Isabella Stewart Gardner and Thirteen Missing Masterpieces (Unsolved Case Files, 3)
Squad Up (A Power Up Graphic Novel)
The Black Slide
Shot Clock (Shot Clock #1)
What We Saw: A Thriller
The Legend of the Lost Boy (The Pathfinders Society #3)
Nothing Interesting Ever Happens to Ethan Fairmont
Who Was Che Guevara?
Who Was Celia Cruz?
Sometimes Love
Undercover Latina (The Factory)
Arab Arab All Year Long!
Peace Is a Chain Reaction: How World War II Japanese Balloon Bombs Brought People of Two Nations Together
It's a Numbers Game! Football
Sandor Katz and the Tiny Wild (Food Heroes, 4)
The Harvey Milk Story
Bottle Tops: The Art and Life of El Anatsui
Indelible Ann: The Larger-Than-Life Story of Governor Ann Richards
Outside, You Notice
Cocoa Magic
The Power of Architecture: 25 Modern Buildings from Around the World
I Am Coco: The Life of Coco Chanel
Amy Wu and the Warm Welcome
Katie and the Cupcake Cure The Graphic Novel (1)
Meet Me Halfway
Hippos Go Berserk!: The 45th Anniversary Edition
Elephant's Big Solo
One Sky
Me and You in a Book Made for Two

You are here: Interview with Dan Poblocki (Tales To Keep You Up At Night)