May 18, 2013 No Comments
Written by Jason Gallaher
Posted in News & Updates 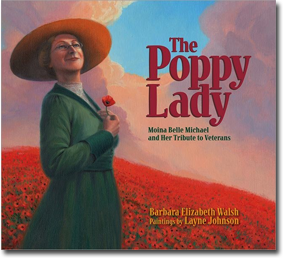 With Memorial Day just around the corner, we here at YABC thought it would be great to speak with an author who has written about military service. Barbara Elizabeth Walsh wrote THE POPPY LADY, which details the story of Moina Belle Michael, a woman who devoted her life to helping American soldiers during World War I. Read below to find out what inspired Walsh to write Moina’s story, and how readers inspired by Moina can support soldiers today.

What inspired you to write Moina’s story about her efforts to help soldiers?

During World War I, the roles of men and women in war were very different than what they are today. How do you think Moina’s story would change if she were affected by war in the 2000s?

How can readers inspired by Moina’s story help soldiers and veterans?

You are here: Interview with Barbara Elizabeth Walsh, Author of THE POPPY LADY