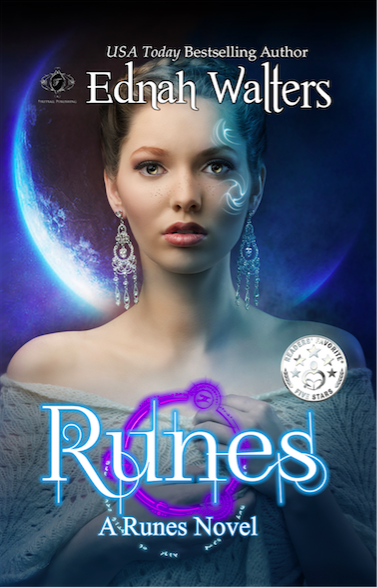 You don’t want to miss out on these

YABC: Tell us a little bit about each of your series

Ednah: Well, where to begin.

Runes series, which is based on Norse mythology, is about Immortal soul reapers and how they meet their soul mates. Unfortunately, there are rules that these Immortals are supposed to follow if they want their identity and existence kept a secret, yet they are willing to break them for their love interest, who tend to be Mortal/humans. I wove Norse mythology in each story, blending in contemporary elements. The series focuses on three friends, Raine, Cora, and Eirik, who are raised in a small town in Oregon, and how they fall in love and discover their true destiny.

Guardian Legacy, based on the children of the fallen angels, focuses on Guardians who watch over humans, and their demonic counterparts, who want to enslave humans and turn them evil. Like Runes series, the groups are both Immortal. The series focuses on the love story of Lil, a girl who didn’t know she was a Guardian and how she falls in love with a half demon while she trains to become the most powerful of all the Guardians.

YABC: What was the hardest scene in the Runes Series to write and why?

YABC: Where did the concept for Runes come to you?

Ednah: I’m not going to sugar coat this. I read Cassandra Clare’s The Mortal Instrument book, City of Bones and read about runes for the first time, so I decided to do a little research. The more I learned about runes, their origin, how Odin acquired them and taught them to the gods before giving them to the worthy humans, the more I was intrigued. Along the way, I got into Norse mythology, especially Valkyries. So I put my spin on it and decided to make Valkyries interact with humans and fall in love with them. And since I couldn’t only focus on soul reapers for Odin and Freya, I had to do stories on reapers for Goddess Hel. It’s been a fun ride.

YABC: Your story centers on Norse mythology, what kind of research did you need to do to prepare for Runes?

Ednah: I’ve read so many books on Norse mythology. I probably have more people on the mythology than all the others. I did online research. Since most of the reapers are Immortal and have been around for centuries, and I have them coming from various civilizations, from Vikings and Gaul societies, Roman and Greek, ancient Egypt and Nubia, Native American, and feudal Japan. I had to read on all these ancient civilizations. Also, since Valkyries recruit humans who are spiritual, they tend to be witches and high priests. It was interesting to see that in every society, there are always high priests, from Druids in Gaul society (Echo in Cora’s story is a Druid) to Native American Shamans (Hawk, an Immortal friend of Raine’s family)

YABC: How many books have you written? Which are your favorites?

Ednah: I write adult romance under E. B. Walters and have 9 books. These are contemporary. Under Ednah Walters, I have 4 Guardian Legacy books and 9 Runes series books. I just finished the 10th Runes book and the first book of Phantom Islanders, my shifter NA book. So that’s a total of 24 books. My favorite series is Runes series. But I have a feeling the Phantom Islanders series might knock her off the pedestal.

YABC: You have such interesting character names.  Do you have a process for selecting names?

YABC: What other Indie authors do you recommend?

Ednah: So many YA authors whose work I love. Anything by Melissa Haag, Karen Lynch, and Quinn Loftis., but like I said, there are a lot I love. Kelly Oram’s contemporary works are amazing too. Rebecca Ethington’s Imalind series and then there are newer authors like Raye Wagner, Char Webster, and Stephany Wallace. Oooh, I recently discovered JL Weil’s books.

Ednah: A NA shifter romance with piracy thrown in there and a dose of Celtic/Irish/Scottish Mythology. Since I want my YA readers to enjoy the book, I’ll have a clean version with a different cover. I hope to release the book in March 2017.

And my big announcement, I’m working with Amazon Publishing to launch Runes Kindle World in April 2017. Present YA Kindle worlds are mainly based on popular TV series targeting teen viewers like The 100, Vampire Diaries, Veronica Mars, Pretty Little Liars to name a few. To date, there are only adult books-based kindle worlds out there, so I hope Runes Kindle World opens doors to more YA-books-based KW. I have a list of amazing authors participating (announcement in January). If you haven’t heard of Kindle Worlds, it is an imprint of Amazon Publishing that teams with authors of established fictional world and allows other authors to write books in that established world. Think of it as publishing a fan fiction and getting paid for it.

Seventeen-year-old Raine Cooper has enough on her plate dealing with her father’s disappearance, her mother’s erratic behavior and the possibility of her boyfriend relocating. The last thing she needs is Torin St. James—a mysterious new neighbor with a wicked smile and uncanny way of reading her. Raine is drawn to Torin’s dark sexiness against her better judgment, until he saves her life with weird marks and she realizes he is different. But by healing her, Torin changes something inside Raine. Now she can’t stop thinking about him. Half the time, she’s not sure whether to fall into his arms or run.Scared, she sets out to find out what Torin is. But the closer she gets to the truth the more she uncovers something sinister about him. What Torin is goes back to an ancient mythology and Raine is somehow part of it. Not only is she and her friends in danger, she must choose a side, but the wrong choice will cost Raine her life

One winner will receive a copy of Runes #1 (Ednah Walters)

8 thoughts on “Indie Superstars: An Interview with Ednah Walters + Giveaway! (US Only)”

You are here: Indie Superstars: An Interview with Ednah Walters + Giveaway! (US Only)