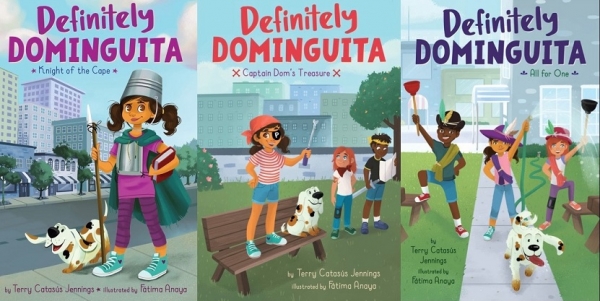 Knight of The Cape

Judy Moody meets Netflix’s One Day at a Time in this first book in a new chapter book series featuring a young Cuban American girl who tries to find adventure based on the classics she read with her beloved abuela—can Dominguita become a noble knight?

All Dominguita wants to do is read. Especially the books in Spanish that Abuela gave to her just before she moved away. They were classics that Abuela and Dominguita read together, classics her abuela brought with her all the way from Cuba when she was a young girl. It helps Dominguita feel like Abuela’s still there with her.

One of her favorites, Don Quixote, tells of a brave knight errant who tries to do good deeds. Dominguita decides that she, too, will become a knight and do good deeds around her community, creating a grand adventure for her to share with her abuela. And when the class bully tells Dominguita that girls can’t be knights, Dom is determined to prove him wrong. With a team of new friends, can Dominguita learn how to be the hero of her own story?

In this second book of the charming and heartfelt chapter series that is Judy Moody meets Netflix’s One Day at a Time, will Dominguita find that X marks the spot?

When Dominguita finds an old map in the back of an even older book in her beloved library, she is excited to see a telltale X marking an unknown place. Everyone knows that X marks the spot for treasure—and Dom knows that means a new adventure for her, Pancho, and Steph!

But everyone seems to think that the map, while fun, probably isn’t real. Dom is determined to prove them wrong. And as the trio starts to uncover the mystery of the map, they realize that it has closer ties to the community they love than they could have imagined.

Judy Moody meets the One Day at a Time remake in this third story in a chapter book series featuring a young Cuban American girl who tries to find adventure based on the classics she read with her beloved abuela—can Dominguita save a quinceañera?

Dom, Pancho, Steph, and their noble steed, Rocco, are ready for their next adventure! When their beloved El Señor Fuentes asks Dom to run a very important errand—to put the order in at the local butcher shop for his daughter, Leni’s, upcoming quinceañera—Dom is happy to help. But when Señor Fuentes discovers the order was never put in—and the food for the party has been sold to someone else—Dom takes a cue from The Three Musketeers to try and figure out what happened.

With the help of Pancho and Steph, Dom discovers the dastardly Bublassi brothers have big plans to sabotage Leni’s party. Keeping in mind the famous motto All for One and One for All, Mundytown’s own Three Musketeers are determined to make sure Leni has a party she’ll remember for all the right reasons!

On September 11, 1961, Terry Catasús Jennings landed in the United States after a short flight from Cuba. On September 12th, she was enrolled in seventh grade in an American school. Her family, including her father who had been jailed during the Bay of Pigs invasion, was now in a free country. The only catch for twelve-year-old Terry was that she could count in English and recite the days of the week and the months of the year, but not much more. Often being the only Cuban in her school—even through college—Terry knows what it’s like to be the new kid on the block. She is delighted to have the opportunity, with Definitely Dominguita, to portray a child of immigrants who is normal—no different than her peers—other than she loves the classics (like Jennings did as a child) and thinks Cuban food rules.

One winner will receive a copy of all three books in the Definitely Dominguita Series! (Terry Catasus Jennings) ~ (US  Only)