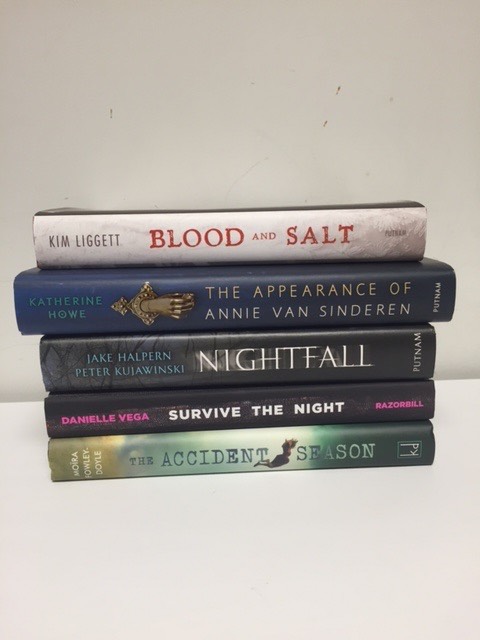 
Nightfall:
On Marin’s island, sunrise doesn’t come every twenty-four hours—it comes every twenty-eight years. Now the sun is just a sliver of light on the horizon. The weather is turning cold and the shadows are growing long.

Because sunset triggers the tide to roll out hundreds of miles, the islanders are frantically preparing to sail south, where they will wait out the long Night.

Marin and her twin brother, Kana, help their anxious parents ready the house for departure. Locks must be taken off doors. Furniture must be arranged. Tables must be set. The rituals are puzzling—bizarre, even—but none of the adults in town will discuss why it has to be done this way.

Just as the ships are about to sail, a teenage boy goes missing—the twins’ friend Line. Marin and  Kana are the only ones who know the truth about where Line’s gone, and the only way to rescue him is by doing it themselves. But Night is falling. Their island is changing.

And it may already be too late

The Accident Season:
Every October Cara and her family become inexplicably and unavoidably accident-prone. Some years it’s bad, like the season when her father died, and some years it’s just a lot of cuts and scrapes. This accident season—when Cara, her ex-stepbrother, Sam, and her best friend, Bea, are 17—is going to be a bad one. But not for the reasons they think.

Cara is about to learn that not all the scars left by the accident season are physical: There’s a long-hidden family secret underneath the bumps and bruises. This is the year Cara will finally fall desperately in love, when she’ll start discovering the painful truth about the adults in her life, and when she’ll uncover the dark origins of the accident season—whether she’s ready or not.

Blood and Salt:
“When you fall in love, you will carve out your heart and throw it into the deepest ocean. You will be all in—blood and salt.”

These are the last words Ash Larkin hears before her mother returns to the spiritual commune she escaped long ago. But when Ash follows her to Quivira, Kansas, something sinister and ancient waits among the rustling cornstalks of this village lost to time.

Ash is plagued by memories of her ancestor, Katia, which harken back to the town’s history of unrequited love and murder, alchemy and immortality. Charming traditions soon give way to a string of gruesome deaths, and Ash feels drawn to Dane, a forbidden boy with secrets of his own.

As the community prepares for a ceremony five hundred years in the making, Ash must fight not only to save her mother, but herself—and discover the truth about Quivira before it’s too late. Before she’s all in—blood and salt.

The Appearance of Annie Van Sinderen:
It’s July in New York City, and aspiring filmmaker Wes Auckerman has just arrived to start his summer term at NYU. While shooting a séance at a psychic’s in the East Village, he meets a mysterious, intoxicatingly beautiful girl named Annie.

As they start spending time together, Wes finds himself falling for her, drawn to her rose-petal lips and her entrancing glow. There’s just something about her that he can’t put his finger on, something faraway and otherworldly that compels him to fall even deeper. Annie’s from the city, and yet she seems just as out of place as Wes feels. Lost in the chaos of the busy city streets, she’s been searching for something—a missing ring. And now Annie is running out of time and needs Wes’s help. As they search together, Annie and Wes uncover secrets lurking around every corner, secrets that will reveal the truth of Annie’s dark past.

Survive the Night:
Just back from rehab, Casey regrets letting her friends Shana, Julie, and Aya talk her into coming to Survive the Night, an all-night, underground rave in a New York City subway tunnel. Surrounded by frightening drugs and menacing strangers, Casey doesn’t think Survive the Night could get any worse…

…until she comes across Julie’s mutilated body in a dank, black subway tunnel, red-eyed rats nibbling at her fingers. Casey thought she was just off with some guy—no one could hear her getting torn apart over the sound of pulsing music. And by the time they get back to the party, everyone is gone.

Desperate for help, Casey and her friends find themselves running through the putrid subway tunnels, searching for a way out. But every manhole is sealed shut, and every noise echoes eerily in the dark, reminding them they’re not alone.

Trapped underground with someone—or something—out to get them, Casey can’t help but listen to Aya’s terrified refrain: “We’re all gonna die down here.”


Jake Halpern and Peter Kujawinski:
Jake Halpern is an acclaimed journalist, author, and radio producer who has written for several publications including The New Yorker and The New York Times Magazine.  As a contributor at NPR, Jake produced one of the most listened-to episodes of This American Life. He co-wrote the Dormia series with Peter Kujawinski and is the author of Bad Paper, a nonfiction book for adults.

For eighteen years, Peter Kujawinski was an American diplomat, on assignment in places like Israel, Haiti and France and at the United Nations in New York.  Most recently, he was the U.S. Consul General in western Canada, which included Alberta, Saskatchewan and the Northwest Territories.  While working as a diplomat, he started to write for adults and children.  He has contributed to the international edition of the New York Times, and with co-author Jake Halpern, Peter wrote the Dormia trilogy (Dormia, World’s End and Shadow Tree).  He lives in Chicago with his family.


Kim Liggett:
At sixteen, Kim Liggett left her rural midwestern town for New York City, where she pursued a career in  music and acting. While attending the American Academy of Dramatic Arts, Kim sang backup for some of the biggest rock bands of the 80’s. After settling down to have a family, she became an entrepreneur, creating a children’s art education program and a travel company specializing in tours for musicians. She’s married to jazz musician Ken Peplowski, and has two beautiful teenagers.

Moira Fowley-Doyle:
Moïra Fowley-Doyle is half-French, half-Irish and lives in Dublin with her husband, their young daughters, and their old cat. Moïra’s French half likes red wine and dark books in which everybody dies. Her Irish half likes tea and happy endings. Moïra started a PhD on vampires in young adult fiction before concentrating on writing young adult fiction with no vampires in it whatsoever. She wrote her first novel at the age of eight, when she was told that if she wrote a story about spiders she wouldn’t be afraid of them anymore. Moïra is still afraid of spiders, but has never stopped writing stories. The Accident Season is her debut novel.

Katherine Howe:
Katherine Howe is the author of the New York Times bestseller The Physick Book of Deliverance Dane and The House of Velvet and Glass. She is a lecturer in American Studies at Cornell University. Her books have been published around the world in 23 languages to date.

Danielle Vega:
Danielle Vega spent her childhood hiding under the covers while her mother retold tales from the pages of Stephen King novels instead of reading bedtime stories about princesses and dwarves like a normal parent. Now an adult, she can count on one hand the number of times in her life she’s been truly afraid. Danielle has won numerous awards for her fiction and nonfiction, and earned a 2009 Pushcart Prize nomination for her short story “Drive.” She is also the author of The Merciless.


3 winners will receive a hardcover copy of each book.

During each giveaway, we ask entrants a question pertaining to the book. Here is the question they’ll be answering in the comments below for extra entries: What is your favorite Halloween read?

58 thoughts on “Giveaway: Wicked Reads from Penguin Teen (US Only)”

You are here: Giveaway: Wicked Reads from Penguin Teen (US Only)