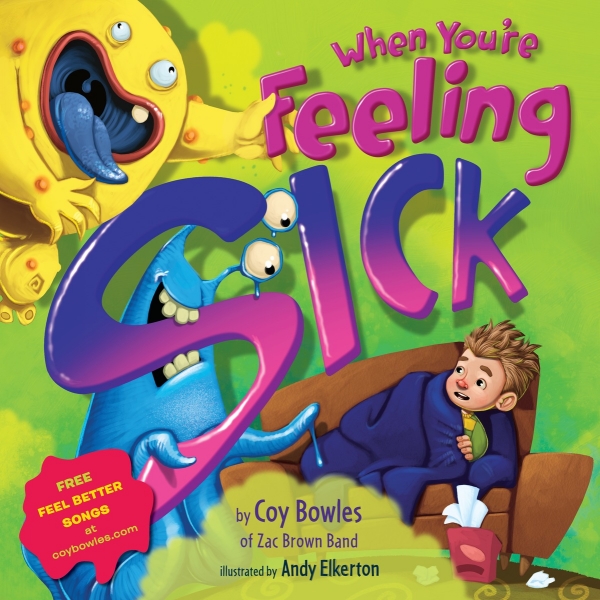 When You’re Feeling Sick (US Only)

This laugh-out-loud picture book from Coy Bowles, guitarist for the Grammy Award–winning Zac Brown Band, will have sick kids feeling better in no time!

Sneezing? Coughing? Taking a sick day? Don’t worry, you’ll be feeling better soon thanks to this hilarious picture book from Coy Bowles, guitarist of the Grammy Award–winning Zac Brown Band. Full of encouraging—and super-silly—rhyming advice on how to face sick days with courage and a positive attitude, When You’re Feeling Sick is just what the doctor ordered! Comes with a sheet of stickers to bring a smile to every sick kid’s face.

COY BOWLES plays guitar and organ and writes songs for the multiplatinum Zac Brown Band. They have won three Grammys and since 2009 have earned 55 award nominations from the Grammys, Academy of Country Music, American Music Awards, Country Music Association, and Country Music Television. Born in Thomaston, Georgia, Coy was raised on love, support, and the idea that he could do anything he put his heart and soul into. After earning a degree from Georgia State University’s Jazz Studies program, Coy formed the band Coy Bowles and the Fellowship. In 2006, they opened for the Zac Brown Band, and soon after Zac asked Coy to join his band full time. Coy’s first book, the self-published Amy Giggles: Laugh Out Loud, teaches kids to accept themselves as they are. Visit Coy at coybowles.com.

1 winner will each receive a finished copy of WHEN YOU’RE FEELING SICK.

4 thoughts on “Giveaway: WHEN YOU’RE FEELING SICK (US Only)”

You are here: Giveaway: WHEN YOU’RE FEELING SICK (US Only)