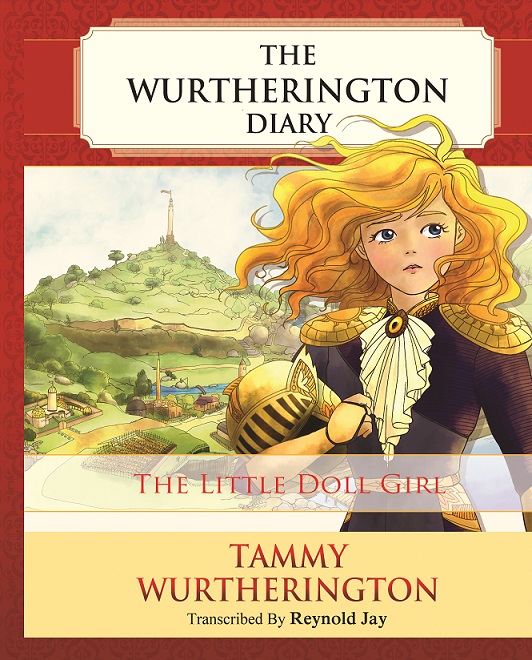 The Little Doll Girl is the first in a series of illustrated children’s books written by Tammy Wurtherington in 1883. Reynold Jay is the leader of a team dedicated to publishing the fascinating Wurtherington Diary. He has authored a dozen books and co-authored a non-fiction book with Amara, “Eternal Defilement.” Once a special education teacher—now an author and restoration professional, he hopes to inspire readers with this new series meant for young and old alike.


The first book will be released September 15, 2015 and then another book every two weeks up to the sixth book. Books seven and eight will be announced at a later date.


As with many illustrated classic stories, it is a story with unique characters and deals with hope, determination, compassion, and much more.


Mr. Jay felt the Diary was important enough to warrant editions for younger readers. Each book will be available in 8-10, 8-12, and 8 to adult reader editions.


In the opening preface, Robert Landsbury discovers the diary in a shed on a newly purchased estate in River Falls, Ohio and passes it along to his associates. The diary is faithfully preserved for today’s reader.
In it, the reader will discover that a ten-year-old mute girl, Tammy Wurtherington residing in the Wixby estate is the author. She loves to make dolls in a shed out in back of the house. She lives with Lord Wixby and Aunt May in a lavish estate at the edge of town. Aunt May teaches her to use a sewing machine and gives her a small one suited to size as a birthday gift. One day while constructing a toy soldier for her brother, Alfred the Mouse appears and is impressed with her ability to make doll outfits and reluctantly invites her to follow him to Kira if she will bring along the sewing machine.


Tammy keeps a diary of her exploits in Kira which is ruled with an iron-hand by a pair of sorceresses, Catherine and Lucinda. Tammy and Alfred find their way through a fantasy underground transportation system that ends up with the pair mistakenly ending up in a wicker-basket in the middle of the ocean. Tammy finds her voice for the first time and Alfred explains that it is a “talking spell that allows virtually everyone to talk including the pesky (giant) flowers.”


From this point you will discover many wonderful characters like Zeke, the Flying Opossum, and Cedric the Mongoose, who accompany Tammy on her journey to Capira to present a petition to return the kingdom to its former glory. You will meet the pirate, Captain Flynn, who loves to have his guests walk the plank and the loveable Kakuna villagers who’s harvest is soon to be confiscated by the royal soldiers. But please beware of the Oxboar forest, where the evil Hoarggs reside otherwise you may end up in a stew-pot.


Tammy has an adventure in which she learns to love all the strange living creatures she encounters in a magical land. Before she departs, all of Kira will fall in love with The Little Doll Girl who changed them forever and became a legend.


As the series progresses Ms. Wurtherington finds herself becoming a time-traveler in order to nudge the space -time continuum in the proper direction during important events in history. Soon she discovers that she is a fearless fighter against tyrants who would destroy the concept of freedom.


The core titles are:


Other books that were found in Tammy’s shed will be published as they relate very well to the Diary. A pair of lavishly illustrated Victorian ABC books, not seen in over one hundred years, will be made available to readers. A historical dime book, Ned Buntline’s Buffalo Bill, The King of the Border Men will be published as a part of the series. Other books, including story color books for the youngest readers, are also planned.


In that many works of art were found in the diary, various limited collector edtions will be available in print editions available at Amazon. Well over one hundred books are a part of the series. Over three hundred works of art can be viewed and purchased now at Fine Art America ( on the internet) in the Reynold Jay gallery.


On a final note, Reynold Jay brought in an international team of restoration artists to restore the beautiful illustrations that were found in the Diary. In that there was a flood, the Diary and the art were nearly lost forever. Reynold Jay says, “It has been a two year journey and I can only hope that we find readers for it. Whether there is any interest in the private thoughts of a little girl living in 1883 will be of any interest to today’s modern readers is yet to be seen.”


Progress and updated news on the series may be found at the writer’s web site, http://biccomix.com/seedsfromheaven.htm. 
Reynold Jay is the leader of a team dedicated to publishing the fascinating 1883 Wurtherington Diary. He has authored a dozen books and co-authored a non-fiction book with Amara, “Eternal Defilement.” Once a special education teacher, now an author, publisher, restoration professional, he hopes to inspire readers with this series meant for young and old alike.


One winner will receive a copy of the book. US only.

During each giveaway, we ask entrants a question pertaining to the book. Here is the question they’ll be answering in the comments below for extra entries: Where does Tammy meet Alfred the Mouse for the first time? Find out here.

4 thoughts on “Giveaway: The Wutherington Diary: The Little Doll Girl by Reynold Jay (US Only)”

You are here: Giveaway: The Wutherington Diary: The Little Doll Girl by Reynold Jay (US Only)