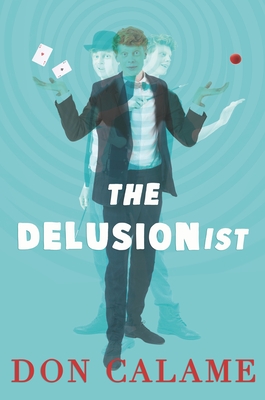 Don Calame is the author of the young adult novels Swim the Fly, Beat the Band, Call the Shots, and Dan Versus Nature. He is also an accomplished screenwriter who has worked with Marvel Studios, the Disney Channel, Lionsgate, Universal Studios, and Paramount Pictures. Don Calame was born in New York and now lives in British Columbia with his wife and their dog, Anna.

1 thought on “Giveaway: The Delusionist (Don Calame) ~ (US/Can Only)”

The Moonlight Zoo
Elephants Remember: A True Story
Little Hearts: Finding Hearts in Nature
Albie on His Way
A Cruel and Fated Light
Breakfast Buddies
Down in the Dumps: The Mystery Box
Down in the Dumps: Trash vs. Trucks
Down in the Dumps: A Very Trashy Christmas
Jingle the Christmas Clown
Map of Flames (The Forgotten Five #1)
Reindeer in Here: A Christmas Friend
I'm a Little Snowman
Santa Mouse Bakes Christmas Cookies (A Santa Mouse Book)
A Very CoComelon Christmas!
Happy All-idays!
The Love Match
The Magic Pencil
Leo's Lavender Skirt
Feminist Kids
Be Careful, Bruno!
A Rock in the Ocean
Skyriders
When You Wish Upon a Lantern
Keyana Loves Her Family
How Many Squirrels Are in the World?
Dreams of Song Times
The Quiet and the Loud
Romani Redd: Stripped
Mr. Bear's World of Food

You are here: Giveaway: The Delusionist (Don Calame) ~ (US/Can Only)