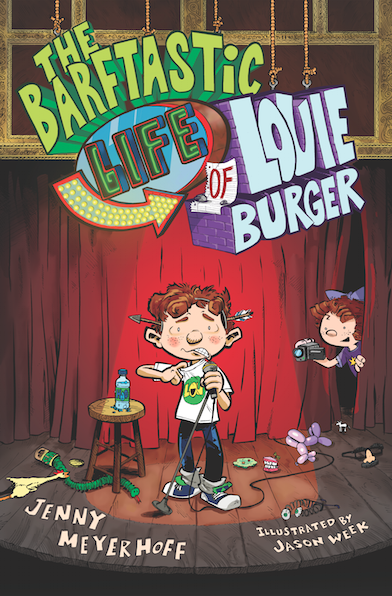 The Barftastic Life of Louie Burger by Jenny Meyerhoff

ISBN: 978-0374305185
Fifth grader Louie Burger figures that with a goofy name like his, he must be destined to be a king of comedy like his idol Lou Lafferman. But he’s only ever performed his stand-up act in his closet, where he and his dad created the most exclusive comedy club ever—if by “exclusive” you mean that no one’s ever allowed inside. With the school talent show coming up, Louie’s wondering if now is his moment to kill (that’s comedian talk for “make actual people laugh”). And maybe, if he brings down the house, he’ll win back his former best friend Nick—who seems to be turning into one of those annoying sporty types—and fend off his dad’s home-improvement obsession, which threatens to remodel Louie’s comedy closet into a private bedroom for his older sister. Barftrocious!
~ Giveaway Details ~

Two lucky winners will receive a copy of THE BARFTASTIC LIFE OF LOUIE BURGER and one Grand Prize winner will receive a Barftastic Backpack filled with joke items including a whoopee cushion, a rubber chicken, fake barf, and more, plus a copy of the book.

To enter, fill out the form below! Winners will be announced in our monthly newsletter, as well as on the giveaway page after the giveaway is over. Bookmark this page or sign up for our newsletter in the right hand column. —–>

6 thoughts on “Giveaway: The Barftastic Life of Louie Burger by Jenny Meyerhoff (US only)”

You are here: Giveaway: The Barftastic Life of Louie Burger by Jenny Meyerhoff (US only)