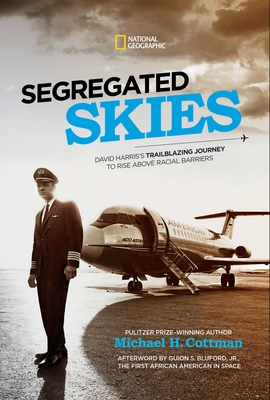 It was 1964 and black men didn’t fly commercial jets. But David Harris was about to change that …

After years of flying B-52 bombers in the United States Air Force, David Harris applied to be a pilot for commercial airliners, an opportunity no other African American before him—not even the famed Tuskegee Airmen—had ever been afforded. After receiving rejection after rejection, he finally signed on with American Airlines in 1964. But this success was just the beginning of another uphill battle for equal treatment.

It was the height of the civil rights movement, a time of massive protests as people struggled to end racial segregation and give Black people equal rights. As a light-skinned, light-eyed Black man, David was told by many people he could have “passed” for white. But he didn’t do that. Instead, he made the bold decision to disclose his race to his employers and fellow airmen. He had experienced discrimination throughout his life, but this was different. He now carried the pride of his family and the hopes of future Black aviators on his shoulders.

This gripping narrative, perfect for middle grade readers and Black History Month, follows Harris’s turbulent path to become the first African-American commercial airline pilot in the U.S., presented against the backdrop of racial tensions, protests, and the landmark civil rights legislation of the 1960s. It’s the story of a man who fought social injustice the only way he knew how—by succeeding.

Michael H. Cottman is an award-winning journalist and author. He is currently program editor for the NBCUniversal News Group’s Diversity, Equity and Inclusion Team – NBC News/MSNBC/CNBC. He was formerly editorial manager for NBCBLK and worked as a political reporter for the Washington Post and a reporter for the Miami Herald. His past books include Shackles from the Deep, The Wreck of the Henrietta Marie, and Million Man March. He has appeared on National Public Radio’s Tell Me More, CNN, The History Channel, and The Oprah Winfrey Show. Cottman was also part of the Newsday reporting team that won journalism’s highest honor, the Pulitzer Prize, in 1992 for coverage of a deadly subway crash in New York. He lives in Maryland, where he spends most of his time reading, researching, writing — and looking for the next big adventure to share with readers.

Two winners will receive an copy of

You are here: Giveaway: Segregated Skies: David Harris’s Trailblazing Journey to Rise Above Racial Barriers (Michael H. Cottman) ~ (US Only)