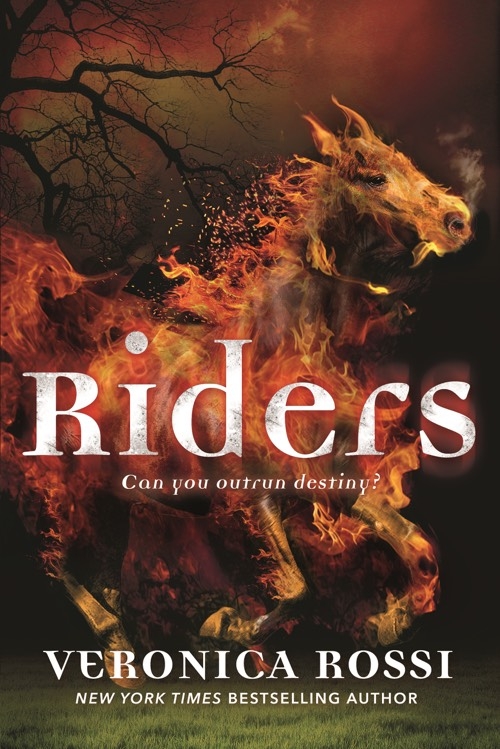 Riders. A new fantasy adventure from New York Times and USA Today bestselling author Veronica Rossi.
For eighteen-year-old Gideon Blake, nothing but death can keep him from achieving his goal of becoming a U.S. Army Ranger. As it turns out, it does.
Recovering from the accident that most definitely killed him, Gideon finds himself with strange new powers and a bizarre cuff he can’t remove. His death has brought to life his real destiny. He has become War, one of the legendary four horsemen of the apocalypse.
Over the coming weeks, he and the other horsemen–Conquest, Famine, and Death–are brought together by a beautiful but frustratingly secretive girl to help save humanity from an ancient evil on the emergence.
They fail.
Now–bound, bloodied, and drugged–Gideon is interrogated by the authorities about his role in a battle that has become an international incident. If he stands any chance of saving his friends and the girl he’s fallen for–not to mention all of humankind–he needs to convince the skeptical government officials the world is in imminent danger.
But will anyone believe him? Veronica Rossi is a New York Times bestselling author of fiction for young adults. She completed undergraduate studies at UCLA and then went on to study fine art at the California College of the Arts in San Francisco. She lives in Northern California with her husband and two sons. When not writing, she enjoys reading, painting, and counting down the minutes until she can get back to making up stories about imaginary people.

One winner will receive a hardcover copy of the book.

21 thoughts on “Giveaway: Riders by Veronica Rossi (US & Canada Only)”

You are here: Giveaway: Riders by Veronica Rossi (US & Canada Only)