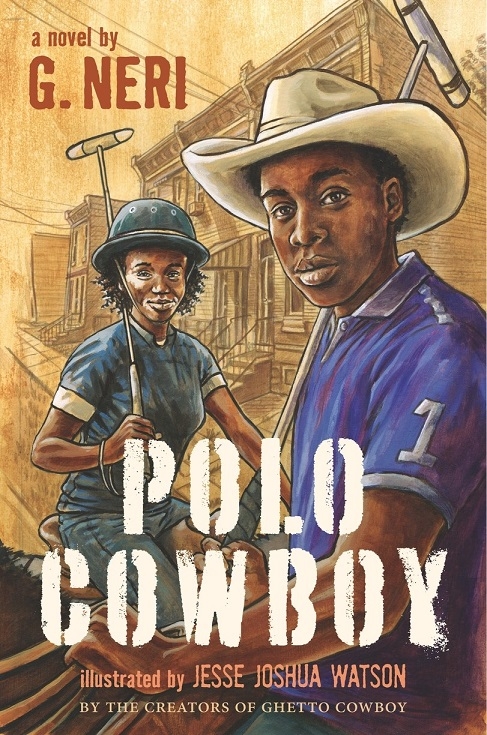 When Cole moves in with his dad, Harp, he thinks life will be sweet–just him and his horse, Boo, hanging out with Philadelphia’s urban cowboys. But when Harp says he has to get a job, Cole winds up as a stable hand for the polo team at George Washington Military Academy, where the players are rich, white, and stuck-up–all except Ruthie, the team’s first and only girl, who’s determined to show the others she can beat them at their own game. As Cole and Ruthie become friends–and maybe more–he starts imagining his future, maybe even at the academy. But between long workdays, arrogant polo players, and a cousin trying to pull Cole into his dangerous business, that future seems remote. Will Cole find the courage to stand and be seen in a world determined to keep him out? With striking illustrations by Jesse Joshua Watson, celebrated author G. Neri’s novel weaves themes of tenacity and community into a rousing sports story inspired by Philadelphia’s real-life urban cowboys and polo players.

Neri is the author of the Coretta Scott King Author Award Honor Book Yummy: The Last Days of a Southside Shorty along with many other books for young readers, including Ghetto Cowboy; Hello, I’m Johnny Cash; and When Paul Met Artie: The Story of Simon and Garfunkel. His books have been translated into multiple languages in more than twenty-five countries. He lives with his family on the Gulf Coast of Florida.

Jesse Joshua Watson is the illustrator of many books for young readers, including the New York Times best-selling Hank Zipzer series, written by Henry Winkler and Lin Oliver, and Ghetto Cowboy and Chess Rumble, both written by G. Neri. He lives with his wife and sons in Washington.

Five winners will receive a copy of Polo Cowboy (G. Neri) ~ (US  Only)