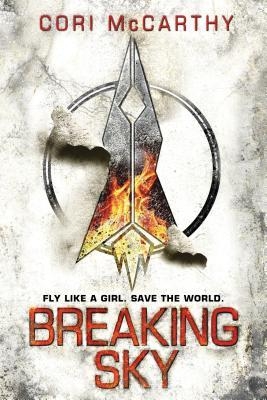 “Breaking Sky is an action-packed thrill ride that smashes through all kinds of barriers at a Mach 5 pace.” — Carrie Jones, New York Times bestselling author of the Need series

“Breaking Sky had me in its grip from take off to landing. Chase is kick-butt female and the swoon-worthy flyboys kept me up way past my bedtime.” –Joy N. Hensley, author of Rites of Passage

“Breaking Sky ticks all the boxes: Love, war, friendship, action and danger – I was left wanting more, more, more!” –Jessica Shirvington, author of One Past Midnight

“Strong characterizations, action, adventure, and emotion combine to produce a sci-fi novel that is more than just the sum of its parts.” — School Library Journal, starred review

“This taut, well-crafted novel should have broad appeal, for fans of everything from Roth’s Divergent to Wein’s Code Name Verity.” –-Bulletin of the Center for Children’s Books, starred review

“Smart, exciting, confident—and quite possibly the next Big Thing.” –Kirkus

She lives for speed. She’ll die for love.

Chase Harcourt, call sign “Nyx”, isn’t one to play it safe. America is locked in a cold war – and the country’s best hope is the elite teen fighter pilots of the United Star Academy. Chase is one of only two daredevil pilots chosen to fly an experimental “Streaker” jet. But few know the pain and loneliness of her past. All anyone cares about is that Chase aces the upcoming Streaker trials, proving the prototype jet can knock the enemy out of the sky.

But as the world tilts toward war, Chase cracks open a military secret. There’s a third Streaker, whose young hotshot pilot, Tristan, can match her on the ground and in the clouds. Chase doesn’t play well with others. But to save her country, she may just have to put her life in the hands of the competition.

Breaking Sky is a gritty coming of age tale with tons of action, a fascinating dystopian society, humor, friendship, romance and heart-stopping, high-stakes flying that will leave you on the edge of your seat. Breaking Sky has also been optioned for film by Sony Pictures.

Speed turned her on.
The other cadets talked about the thrill of flying, but Chase didn’t relate. Her love was more specific. She flew for the high-g press of ten times the weight of gravity. For the throttle thrust forward, the roar-rev of the engines, and then, the mach rush.
Chase was in the atmosphere—flying so fast she felt like solid muscle. Her thoughts were a dance of impulse as she backed off the speed and looked through the tempered glass canopy. The earth knelt before her like she was holding court over the whole damn planet.
She smiled.
“I don’t suppose you see a gas station.” Pippin sat a few feet behind her, but his voice was closer, a direct link from his mask to her helmet’s headphones. “Nearing bingo fuel, Nyx.”
“Give me two minutes.” Chase smelled a challenge. Or she imagined one. Anything to prolong the hop and do something fun.
She pulled back on the stick, pointing the nose of her jet straight at the midday sun.
Brilliance charged the crystal dome.
“Tower to Nyx. Come in, Nyx,” Pippin mocked. “My sense of mortality insists I ask if we’re coming down anytime soon. As much as I wanted to be an astronaut when I was five, Dragon isn’t a star- ship. Where are we going exactly?”
“Somewhere. Anywhere.” The sun blinded through her smoky visor, but she kept her eyes ahead. “Up.”
“Yes, I was going to point out that somewhere feels like up today. Sylph is already halfway home.”
“Good.” Chase gripped the throttle, and the leather of her gloves gripped back. “We don’t need Sylph sniffing around for this.”
Moments scratched by, and Pippin cleared his throat. Twice. “We got to get high, Pip. Real high. Otherwise, we’ll smash into the ground before we can break the sound barrier in a down- ward spiral.”
“WHAT? WHY?”
Her reasons stacked. Because the training runs were tedious. Because Sylph, the pilot of the other experimental Streaker jet, had never and would never try such a stunt. And because Chase was Nyx, and with that title came certain wild expectations.
And the cherry on top? Because Chase needed to prove she could do it.
When they were nearly thirty miles up, about to leave the strato- sphere, she turned the jet toward the curve of the earth’s surface and let them freefall. Gravity took hold, and she steeled herself to punch through it.
“Wait, Nyx. I’m all for fun, but this is—”
The engine howl took over. They blazed at the blue-on-blue planet, the green smatterings coming into focus. She felt the mach tuck, the air trying to slow her down, just as the sound barrier broke.
The sonic boom was lost behind them, but a pearly halo erupted in their wake.

Cori McCarthy studied poetry and screenwriting before falling in love with writing for teens at Vermont College of Fine Arts. From a military family, Cori was born on Guam and lived a little bit of everywhere before she landed in Michigan. Learn more about her books at CoriMcCarthy.com

About the Book:
Jaycee is about to accomplish what her older brother Jake couldn’t: live past graduation.

Jaycee is dealing with her brother’s death the only way she can – by re-creating Jake’s daredevil stunts. The ones that got him killed. She’s not crazy, okay? She just doesn’t have a whole lot of respect for staying alive.

Jaycee doesn’t expect to have help on her insane quest to remember Jake. But she’s joined by a group of unlikely friends – all with their own reasons for completing the dares and their own brand of dysfunction: the uptight, ex-best friend, the heartbroken poet, the slacker with Peter Pan syndrome, and… Mik. He doesn’t talk, but somehow still challenges Jayce to do the unthinkable—reveal the parts of herself that she buried with her brother.

Cori McCarthy’s gripping narrative defies expectation, moving seamlessly from prose to graphic novel panels and word art poetry, perfect for fans of E. Lockhart, Jennier Niven, and Jandy Nelson.  From the petrifying ruins of an insane asylum to the skeletal remains of the world’s largest amusement park, You Were Here takes you on an unforgettable journey of friendship, heartbreak and inevitable change.

“You Were Here is wrenchingly beautiful in its honest and achingly accurate portrayal of grief and how it breaks us—and the way unconditional friendship puts us back together.”—Jo Knowles, award-winning author of See You At Harry’s and Read Between the Lines

“The urban explorers of You Were Here dive deep into the forgotten man-made spaces all around them–and their own feelings of loss, love, and fear. McCarthy deftly intertwines the characters’ stories, filling them with authentic pain and heartache as well as soaring moments of grace and humor. I dare you to read it!” –Maggie Lehrman, author of The Cost of All Things

1 thought on “Giveaway: Breaking Sky by Cori McCarthy (US & Canada Only)”

You are here: Giveaway: Breaking Sky by Cori McCarthy (US & Canada Only)