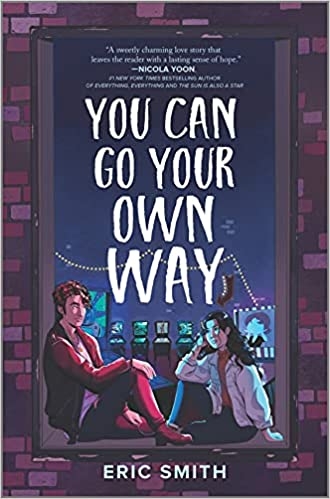 No one ever said love would be easy…but did they mention it would be freezing?

Adam Stillwater is in over his head. At least, that’s what his best friend would say. And his mom. And the guy who runs the hardware store down the street. But this pinball arcade is the only piece of his dad that Adam has left, and he’s determined to protect it from Philadelphia’s newest tech mogul, who wants to turn it into another one of his cold, lifeless gaming cafés.

Whitney Mitchell doesn’t know how she got here. Her parents split up. Her boyfriend dumped her. Her friends seem to have changed overnight. And now she’s spending her senior year running social media for her dad’s chain of super successful gaming cafés—which mostly consists of trading insults with that decrepit old pinball arcade across town.

But when a huge snowstorm hits, Adam and Whitney suddenly find themselves trapped inside the arcade. Cut off from their families, their worlds, and their responsibilities, the tension between them seems to melt away, leaving something else in its place. But what happens when the storm stops?

YOU CAN GO YOUR OWN WAY is a YA contemporary about family business, friendship, and letting go. Adam and Whitney used to be best friends until high school when she turned her back on him in the cruelest of ways not long after his father died. Now, Adam helps run his family’s arcade, while Whitney runs the social media accounts for her father’s eSports café business that has really taken off. Although it is not doing very well, Adam cannot imagine changing anything about the arcade his father loved, much less selling it to Whitney’s father to become his next café.

Whitney desperately wants her father’s attention – it’s why she has devoted her life to running his company’s social media accounts. It’s a challenging job, but it’s really the only thing she talks about that he will occasionally listen to. When her brother damages a rare pinball machine at Adam’s arcade and then throws (insufficient) money at the problem, Adam posts about it on social media, garnering media attention. The ensuing social media arguments results in Whitney and Adam reconsidering the manifestations of the relationships with their respective fathers and their long-standing feud.

What I loved: This was a really engaging story about two teens struggling to define their relationships with family and their own lives. The shadows of their fathers have led to their current situations and emotional investments in the respective businesses. They each experience a lot of growth as they understand the ways these relationships have driven their choices and the ways in which they want to move forward. Their feud results in a lot of fun banter and social media discussions with a lot of real hurt and loss behind it. Whitney needs to realize a lot about her supposed friends and their expectations that she has thus far accepted on the way to popularity.

The trapped-in-a-snowstorm scenes were really fantastic, though brief and much later in the story. They provide the impetus to deeper discussions. The themes around family expectations, the search for popularity, mean girls, friendship, grief, and social media.

What left me wanting more: I would have appreciated more of the trapped scenes and reuniting parts to really build up to the relationship. It was tough to fully buy in to their reunion without additional depth and explanations (though there are some key epiphanies). I also would have appreciated more resolution on the issues around Whitney and her father, but on the other hand, it did feel very real and the internal resolution was the most important.

Final verdict: A charming YA contemporary, YOU CAN GO YOUR OWN WAY is an intriguing read about family expectations, friendship, and social media. Recommend for fans of TWEET CUTE, MEET ME AT MIDNIGHT, and ONLY MOSTLY DEVASTATED.

You are here: Featured Review: You Can Go Your Own Way (Eric Smith)