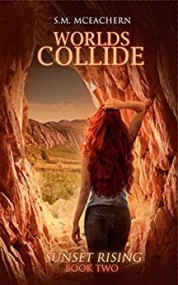 Centuries old secrets and forbidden love collide in the action-packed sequel to Sunset Rising. In a desperate attempt to escape execution, Sunny and Jack find a way out of the Pit and into a world still believed to be toxic with radiation. Under the brilliant sun for the first time in their lives, they not only discover that the earth has healed from nuclear war, but there are people outside the Dome. In Worlds Collide, the second book of the Sunset Rising trilogy, Sunny and Jack must continue a life of subterfuge in order to stay alive and find a way to free the Pit. But in their attempt to save the urchins, they uncover the horrifying truth about President Holt and the evil he could unleash on the world.

What I liked:
Worlds Collide the second book in the explosive Sunset Rising series that surrounds a young lady from the pit and the son of the controlled President. Jack and Sunny made it outside the dome in book one, and now they are outside, they are learning the truth about the Earth and the President’s real goal in attempting to destroy the pit.
An action-packed, emotional ride, and the world expands with each book. In book one, we are inside the dome, mainly in the lower bowels of it, where the oppressed people are. In book two, we fled the dome and are now out in the world, learning things are not as we have always been told. Sunny and Jack desperately blend in with those living outside the dome. They know all about the President’s plan to build a city for the Bourges and wipe out all who do not meet his criteria to survive.
Final Verdict:
This story is always surprising; when things get stable, and you believe that the story is losing its momentum, something new changes the direction of the narrative. Sunny and Jack are a worthy couple that is just desperate to make the world a better place. I can’t wait to see how it all wraps up in the explosive final book of this dystopian series.